Republican presidential candidate Donald Trump greets supporters as he arrives to appear with New Jersey Governor Chris Christie at a fundraising event in Lawrenceville, N.J. on May 19, 2016.
Mike Segar—Reuters
By Elizabeth Dias

In a clear sign of a pivot towards the general election, Donald Trump privately discussed immigration policy on May 11 with a representative of the largest Hispanic evangelical association at Trump Tower.

The representative left the meeting expressing surprise at how supportive the presumptive Republican nominee had been. “Donald Trump showed a tremendous understanding and concern for the undocumented immigrants,” evangelical pastor Mario Bramnick. “We all came out really sensing his genuineness.”

Bramnick, a Cuban-American who advised Sen. Ted Cruz during the primary, came to the meeting as a representative of the National Hispanic Christian Leadership Conference (NHCLC), which has more than 40,000 member churches. The group’s leader, pastor Samuel Rodriguez Jr., has been openly critical of Trump’s plan to build a southern wall and deport with force the roughly 10 million undocumented immigrants currently living in the United States. “It’s impossible,” Rodriguez says. “You’d have to have a Gestapo sort of apparatus, in the vein of World War II, putting people not on trains but airplanes.”

But in the meeting, Bramnick said Trump suggested a clear willingness to work with the Hispanic community. While Trump did not say he would revisit any of his policies, he signaled an openness to continue the conversation, Bramnick said. “We didn’t get into specifics other than that he wants to work with us, work with the Hispanic community, Hispanic leadership on substantive policy regarding immigration,” said Bramnick, who leads the Hispanic Israel Leadership Coalition, a subsidiary of the NHCLC, and New Wine Ministries, a 300-member congregation in Fort Lauderdale. Televangelist Frank Amedia, pastor of Touch Heaven Ministries and the Trump campaign’s new “liason for Christian policy,” arranged the meeting, Bramnick says, which lasted for about a half hour, and then included time with Trump’s son Eric.

Since locking up the nomination, Trump has continued to speak about his plans to build a wall on the southern border and force Mexico to pay for it, in part by threatening to block private money transfers from the U.S. to Mexico. In his stump speeches, he casts undocumented immigrants as criminal outlaws, who threaten not just the American people but the legal frameworks of the country. “Mr. Trump has always been very clear on his position,” said Hope Hicks, a spokeswoman for the Trump campaign, when asked if the meeting signaled any policy shift.

But the meeting fits into a larger Trump strategy of reaching out to recent opponents in an attempt to find common ground. Bramnick says they also discussed the erosion of religious liberty, and protection of Israel. The five other pastors who also attended, Bramnick says, included televangelist Sid Roth, Rick Joyner of Morning Star Ministries, an Asian-American pastor, a representative of the Cuban-American community in South Florida, and the father of Colombine victim Rachel Scott.

This week, Trump accepted an invitation to send a video message to the NHCLC’s Latin Leaders Fest in Anaheim. Clinton has also agreed to send a video message. The event is a leadership conference for some 1,200 attendees, and includes Christian music performances and sessions on business, education, ministry, and Israel. The candidate videos will be shown Friday night.

These steps are only the beginning if Trump really wants to try to make amends. Rodriguez, the president of NHCLC, hopes Trump will apologize to the Latino immigrant community for his “hurtful, erroneous, and dangerous statements,” and he wants to know what Trump’s actual immigration solution is beyond all his talk of a building a border wall and deporting millions. “Latino evangelicals are more divided than white evangelicals on Trump,” he warned.

An internal NHCLC poll of 120 Latino evangelical pastors and denominational heads taken in late March—when Texas Sen. Ted Cruz and Ohio Gov. John Kasich were still running—shows Trump’s challenge. Two thirds found more hope in the Republican party than the Democratic party, and nearly as many voted for Mitt Romney in the 2012 election. But at the time, only 4% said they’d vote for Trump, while nearly half said they would vote for Cruz and a quarter chose Kasich. Clinton got about 15% of the vote.

The poll found that the top issue for these Latino evangelical leaders was the economy, followed closely by immigration reform. A third of participants also said they see themselves as independents, most say their views reflect the Latino community more broadly, and nearly all said they are eligible to vote in the election.

Bramnick says he plans to make an endorsement in the weeks ahead. Rodriguez, who had advised Rubio, Bush, and Cruz, says he will not endorse a candidate from either party, but his ultimate goal is to help protect the 11 million undocumented people in this country. “I want to pass immigration reform,” Rodriguez told TIME last month. “I have to work with the political realities that we have.” 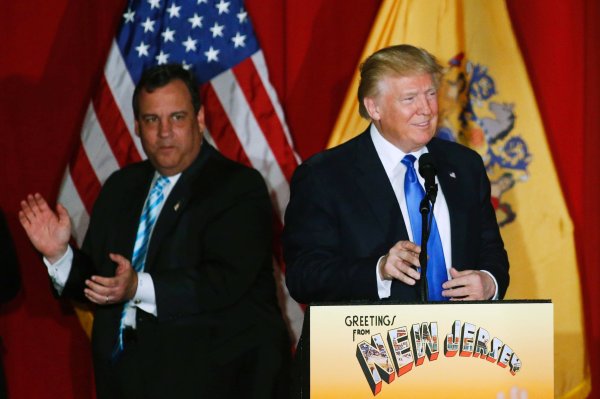 Trump Returns the Favor for Christie in New Jersey
Next Up: Editor's Pick