At 13, Sophie Turner auditioned for the part of Sansa Stark on HBO’s Game of Thrones by reading a scene that ended with Sansa staring at her father’s decapitated head on a pike. While her peers were studying for geometry exams and shopping for prom dresses, Turner was delving into a character who pined after a psychopath, was stripped in front of a court on the orders of said psychopath and, last year, brutally raped–and she did it all while critics lambasted the character on social media. “Sansa, stop whining and stab someone already,” one fan tweeted.

Things are starting to change for the character on the show: This season, Sansa reunited with brother Jon Snow, and she was the one to encourage him to build an army for a long-awaited battle with her rapist, Ramsay. The dialogue was reminiscent of conversations Sansa’s mother Catelyn had with her son Robb when Catelyn was head of the Stark family. She also dressed down her supposed protector Little Finger for marrying her off to Ramsay Bolton and rejected the help her offered in the form of an army. Sansa is finally growing up.

And, as an actress, so is Turner. Her first major film, X-Men: Apocalypse, opens in theaters May 27. Turner, now 20, plays the iconic red-headed mutant Jean Grey who must learn to harness her power to read minds—and possibly control and manipulate them. (Though Turner is most identifiable by her scarlet locks, she’s actually naturally blond.) The telekinetic hero, previously played by Famke Janssen, is the most powerful character in the X-Men series and one of the few female superheroes currently gracing the silver screen.

Turner’s rise has been tied inseparably to fan culture. Social media have allowed fans to be a click away from their stars. They’ve also fueled a good deal of debate around issues like feminism on television. For Turner, that means growing into herself under the microscope and engaging with fans on matters cultural and political from a very early age.

But Turner, who was raised in rural Warwickshire, England, had to mature quickly anyway, thanks to the controversial show. “The kids, we really had no idea what we were getting into,” says Turner of getting her start on the TV-MA-rated fantasy series. “They just threw us in there and treated us very much like adults.”

Her mother, a former preschool teacher, accompanied her to the sets in Ireland and Croatia. Her parents also initially forbade Turner to read the Song of Ice and Fire books upon which the series is based—though that didn’t keep Turner from Wikipedia-ing Sansa in order to find out her fate. The results of her research: abusive relationship after abusive relationship.

“On the one hand, you’re like, ‘I know everything about life now.’ And then you go back home, and you act like a little girl again and get freaked out by the word sex,” says Turner. “I remember one time standing around with Peter [Dinklage] and Conleth [Hill] between takes, and Conleth swore. Peter goes, ‘Come on, dude, she’s only 14. Be cool.’ Then they call action, and Peter’s next line was something like, ‘Shut up or I’ll shove a wooden c–k up your ass.’ The line was so blurred.”

Starring on Thrones gave her a crash course in handling controversy. When 8 million people tune in to your show every week, you are bound to encounter backlash, and Sansa was far from the best-liked character. Especially compared with her pugnacious but charming sister Arya (Maisie Williams), Sansa seemed idealistic to a fault–and even came off as weak. Indeed, the criticisms of Sansa are often based on the sexist assumption that a character cannot be both “girly” and strong—Sansa long dreamt of courtroom intrigue rather than swordplay and even named her fearsome direwolf “Lady.”

But it wasn’t until Season 5 that Turner had her first major encounter with fan outrage, when Sansa was sexually assaulted by her sadistic husband Ramsay Bolton (Iwan Rheon). “To have to do a really intense scene, like the rape scene last season, we couldn’t really sleep beforehand, Iwan and I,” she says. “During the day, it was a bit awkward. But afterwards you just go to Safe Haven, which is the hotel bar, and sort yourselves out.”

Game of Thrones had already earned plenty of criticism for its portrayal of women; every major female character has been threatened with or has been the victim of sexual assault. Critics argued that Sansa’s rape went too far, with Senator Claire McCaskill declaring she was “done” with the show on Twitter: “Gratuitous rape scene [was] disgusting and unacceptable.”

Before Turner, then 18, had even filmed the scene, she told Entertainment Weekly that she “loved” how “messed up” it was. When EW published the interview, it didn’t blunt criticism but did add an actor’s perspective.

“I think people really respond to characters who are strong-willed and have strong opinions,” she tells TIME. “I think Sansa keeps everything under wraps in order to survive and doesn’t fight back immediately. It turns out people aren’t her biggest fans. I’ve found myself defending her over and over again throughout the years.”

It��s a conversation that has since shaped her views on how women are portrayed on TV and in film. “I wasn’t thinking about these issues when I first started acting. But it’s made me think a lot more about it,” she says. “In my opinion, Game of Thrones is not sexist, and it’s accurate to medieval times. The show puts social boundaries on the women, and they break out of those boundaries. I think it’s quite a feminist show.”

In fact, she says the debate pushed her toward Jean Grey, who in this latest X-Men installment teams up with Jennifer Lawrence’s Mystique and others to defeat an ancient and evil mutant named Apocalypse (Oscar Isaac). Throughout the series, the mutants have faced discrimination, and the moral of every film–including, spoiler alert, this one–is that embracing diversity will save the world. “What we’re going through today with conversations around sexism and racism, I think the themes of X-Men will really resonate with everyone,” she says.

For all the time spent defending Sansa and promoting Jean, Turner has managed to connect to fans through more lighthearted fare. Her Instagram feed is littered with pictures of her goofing off with onscreen sister Williams and her dog Zunni, whom Turner adopted from the Thrones set. (Zunni’s character was killed off in Season 1, which Turner says was actually a blessing. “As an actor, she was a bit sh-t,” Turner says. “We had to teach her to sit when she came home. She couldn’t even do that.”)

As Sansa has turned darker, Turner has remained fiercely upbeat. She even has a hopeful outlook on her characters’ futures: Sansa, she hopes, will get her revenge against the Boltons. And Jean Grey is a “total badass.” “I’ve spent years being so jealous of Maisie getting to do all this fighting on Game of Thrones. So it was great to kick butt myself as Jean,” she says. “And I finally got to wear trousers.”

There will be two more seasons of Thrones, and X-Men director Bryan Singer has teased an Apocalypse sequel based on the Dark Phoenix plot from the comic books with Jean Grey at its center. Meanwhile, debates about empowerment and representation will continue. Under pressure, Turner, like Sansa and Jean, is slowly discovering her powers and will soon be ready to fully employ them. 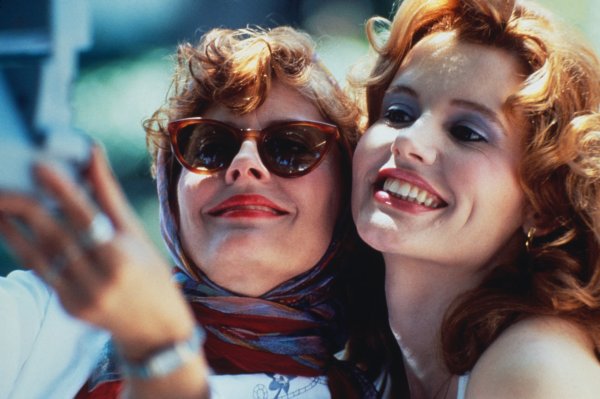 How 'Thelma & Louise' Captured a Moment in the History of American Feminism
Next Up: Editor's Pick