Making his first campaign appearance in nearly two weeks, the presumptive GOP nominee was the star among the sea of “Make America Great Again” hats, overshadowing his former rival-turned-transition chairman. Christie’s surprise endorsement of Trump three months ago came at a pivotal juncture and paved the way for mainstream Republicans to come to terms with their bombastic front-runner.

As Christie is on Trump’s vice presidential short-list, the fundraiser to benefit Christie’s dormant campaign was a sort of audition for the No. 2 slot. But Trump repeatedly reminded the audience and Christie of who was top dog.

“I’m not eating Oreos anymore you know that,” Trump said as part of his usual riff on trade after the cookie-maker Nabisco moved some production to Mexico. “Neither is Chris,” Trump added, in what may have been a reference to Christie’s weight. “Don’t feel bad.”

Noting that the pair of finance events retired the candidate’s substantial debt, Trump couldn’t help but point out the surroundings at a crowded National Guard armory were less than optimal.

“You know, Chris paid off his entire campaign debt tonight,” Trump declared, nodding toward the governor. “And you know, you can’t give them a table or a seat. That’s terrible.”

Christie who endured attacks from many in the GOP Establishment who criticized his decision to back Trump was unapologetic. “Well, they can come and meet the next president of the United States with me.”

“He has brought greatness to every enterprise he has ever led,” Christie gushed of the businessman who has endured multiple bankruptcies, including a failed enterprise in beleaguered Atlantic City. “We don’t need more Washington, D.C., insiders messing up this country,” Christie added in his trial-run, “and we sure as heck don’t need Hillary and Bill Clinton back in the White House.”

But though the crowd was filled with college students and Christie allies, it was Trump who was at the center of attention. “There’s nothing like New Jersey: So many wiseguys,” he said, as the crowd roared.

Delivering a greatest hits version of his stump speech, Trump proclaimed the GOP nominating process he topped as “rigged,” and declaring he was unconcerned about the prospect of a trade war with China over his protectionist policy proposals.

Trump also addressed the loss of EgyptAir Flight 804, blaming it on “radical Islamic terrorism,” though the U.S. government hasn’t confirmed a cause, according to the White House. 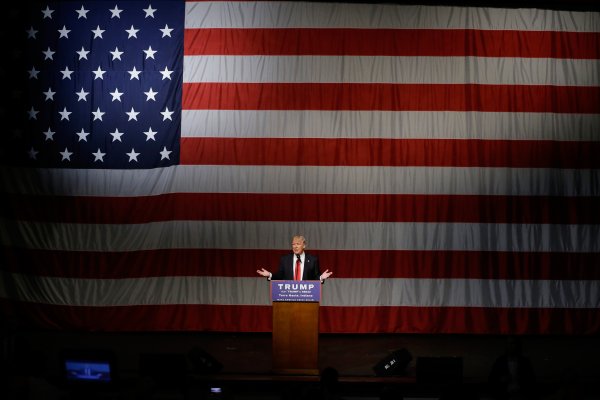 Trump Slams Clinton After Being Called Unfit for Office
Next Up: Editor's Pick