Nicolas Maduro, Venezuela's president, pauses while speaking during a news conference in Caracas, Venezuela, on Tuesday, May 17, 2016. Earlier this month, Venezuela's opposition said it had cleared the first hurdle in a drive to remove Maduro from office. The opposition says almost 2 million people signed a petition calling for a recall process to start, far outstripping the 200,000 required by law. Photographer: Carlos Becerra/Bloomberg via Getty Images
Bloomberg—Bloomberg via Getty Images
By Ian Bremmer

The situation in Venezuela is going from bad to worse. This week, Venezuelan President Nicolas Maduro repeated his threat to seize closed factories and nationalize them, a bold move considering his popularity numbers are in the tank and the opposition—which won legislative elections late last year—is breathing down his neck. These 5 facts explain what you need to know about Venezuela right now.

Read More: Inside the Booming Smuggling Trade Between Venezuela and Colombia

When we last checked in with Venezuela, the country was already being crippled by shortages. The situation has deteriorated further. Water is now rationed by the government, and some residents have been warned that water will be supplied just once every 21 days after the mainland reservoir dries up. Venezuelans have begun stealing water from swimming pools and tanker trucks to get by. Electricity is limited too, with Maduro ordering public offices open just two days a week in a bid to conserve energy. This is in addition to the four-hour power cuts ordered across the country and the rolling blackouts that have become a part of daily life. Basic medicines like aspirin are nowhere to be found, and supermarket shelves are often empty. In April, another devastating blow: the country’s largest private company, Empresas Polar SA, closed its doors. Empresas makes 80 percent of all beer consumed in the country—a tough turn of events at a time when Venezuelans could use a drink.

2. How Venezuela Got Here

As Hemingway would say, Venezuela went bankrupt gradually, then suddenly. For years, the country has been deeply dependent on its vast oil reserves, which account for 96 percent of export earnings and nearly half its federal budget. That was manageable when oil was selling at more than $100 dollars a barrel. Venezuela has budgeted for oil at $40 per barrel for years now, but instead of saving the surplus when prices were higher, much of this emergency oil fund was either spent or stolen. Venezuela would now need oil prices to reach $121 per barrel to balance its budget—instead, they’re hovering around $50. Damage to Venezuela’s economy has been exacerbated by drought. About 65 percent of the country’s electricity is generated by a single hydroelectric dam that’s now in serious trouble.

Read More: These 5 Facts Explain Why Venezuela Is in Big Trouble—Still

For decades, corruption has been a constant in Venezuelan politics. It’s the most corrupt country in the Americas, and 9th most corrupt in the world, according to Transparency International. Its murder rate of 90 per 100,000 residents is the second-highest in the world (after El Salvador). Not surprisingly, people are angry. There are an average of 17 demonstrations per day across the country, according to the Venezuelan Observatory for Social Conflict. The current unemployment rate is 17 percent, and the IMF projects it will reach nearly 21 percent next year. The inflation rate is expected to hit 481 percent by year’s end and 1,642 percent by next year, according to the IMF. To put that in perspective, in February a McDonald’s Happy Meal in Caracas cost $146 dollars at the official exchange rate of 6.3 bolivars per dollar.

4. Changing of the Guard?

Legislative elections this past December handed control of Venezuela’s parliament to the Democratic Unity coalition, a political grouping of centrist, center-left, and center-right parties. It was the first time in 17 years that “Chavismo,” the unique brand of socialist and populist politics spearheaded by the late president Hugo Chavez and continued by Maduro, his chosen successor, failed to win nationwide elections. Maduro’s approval rating in December was 22 percent; today it’s 15 percent. Some 70 percent of Venezuelans want him removed from office. Populists need popular support, and Maduro’s is running out.

5. Race Against the Clock

To that end, the opposition has collected enough signatures to trigger a recall referendum against Maduro. Activists needed 200,000 signatures, one percent of all voters, to kick-start the process. They got 1.85 million. Two weeks ago they submitted their list to the National Electoral Council (CNE) for approval, but the validators are government loyalists and have been dragging their feet.

Why? Timing of the referendum is crucial. According to the Venezuelan constitution, if the president is ousted within the final two years of his term, the presidency passes to the sitting vice-president—in this case, Aristobulo Isturiz, a loyal Chavista. If that should come to pass—January 10, 2017 is the magic date—the opposition fear is that the Chavista movement will simply sacrifice Maduro to protect Chavismo. And short of a popular uprising intense enough to force the government to move more quickly, that’s exactly what will happen. Maduro looks likely to be ousted before his term officially ends; the real question is whether Chavismo will get the boot along with him. 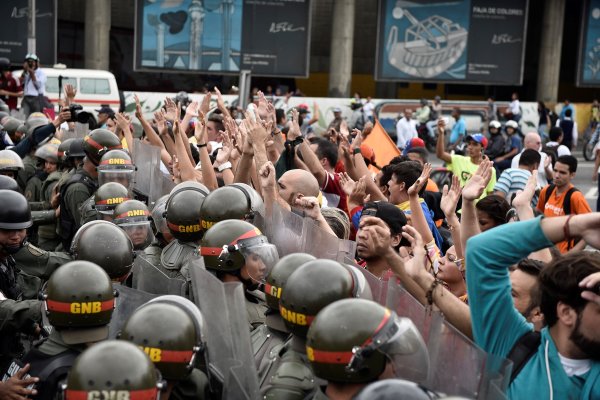