France and Egypt Seek Answers in Disappearance of EgyptAir Jet

Authorities in France and Egypt were attempting Thursday to piece together the final moments of the EgyptAir plane that vanished over the Mediterranean in the early hours of the morning, with speculation running rampant that the crash could be an act of terrorism.

A plane vanishing from radar and falling out of the sky—as EgyptAir MS804 did on Thursday morning—is extremely unusual, in an age of state-of-the-air radar and aviation technology. But recent plane crashes show that pilot error, bad weather, or deliberate pilot action can also be factors in sudden disappearances.

The Airbus A320 crashed into the Mediterranean with 66 passengers on board, late into the Paris-Cairo flight. The plane had left Charles De Gaulle Airport at 11:05 p.m. local time on Wednesday night. Egyptian authorities said they received no distress signal from the cockpit before the plane vanished from radar at about 2:29 a.m. Cairo time.

French President François Hollande told reporters that “the information we have gathered confirms, alas, that this plane has crashed, and it has disappeared.” But with no wreckage yet found, Egyptian civil aviation minister Sherif Fahty declined to use the word “crash,” calling the aircraft a “lost plane” during a news conference in Cairo on Thursday afternoon.

Egyptian Prime Minister Sherif Ismail on Thursday did not rule out a terrorist attack as the cause, however, telling reporters, “We cannot exclude anything at this time or confirm anything.” Shortly after noon, Hollande said on television, “We will know the truth.”

Read more: Here’s What We Know So Far About EgyptAir Flight 804

Egypt has been the victim of terrorism in the skies relatively recently. Last October, a Metrojet charter plane filled with Russian tourists crashed into the Sinai Desert shortly after taking off from the Egyptian Red Sea resort of Sharm el-Sheikh, headed to St. Petersburg, Russia. All 224 passengers died in the crash. Investigators quickly speculated that a home-made bomb had been placed aboard the aircraft and in February the Islamic State, or ISIS, claimed responsibility, saying that it had indeed smuggled an explosive device aboard the aircraft.

In March, a passenger aboard an EgyptAir plane flying from Alexandria to Cairo hijacked the plane wearing a fake suicide belt, an incident that raised deep concerns among aviation authorities about the anti-terrorist measures in place on EgyptAir flights, and at Egyptian airports.

But in France, airport authorities have in recent years conducted routine security investigations on staff members — checks that were bulked up in the aftermath of the terrorist attacks in Paris in November. Jean-Charles Brisard, chairman of the Center for the Analysis of Terrorism in Paris said a recent investigation had resulted in about 12 airport employees losing their jobs, “because of their links to Islamism and for some of them groups linked to terrorism.”

All the security checks in the world cannot guarantee safety, says Gérard Feldzer, an aviation consultant and former Air France pilot. “No airport in the world is 100 percent safe,” he told TIME. “It is always possible to find a solution to put something in the plane. It might be possible to put a bomb on at Cairo before it started from Cairo.” Flight 804 was the plane’s fifth trip in 24 hours, in a journey that began in Asmara, the capital of Eritrea in northeast Africa, and included a flight to Carthage in Tunisia, and two stops in Cairo.

Technical faults and human errors could also be to blame. In June 2009, an Air France jet crashed into the Atlantic Ocean en route from Paris to Rio de Janeiro, killing all 228 people aboard. It took nearly two years to find the black boxes, and after an extensive probe French aviation investigators finally concluded bad weather had provoked a technical error on the aircraft. The pilots had not been adequately trained to deal with the incident, they said.

That doesn’t seem to be the case here. On Thursday morning, an Egyptian pilot trainer told France 24 Television that he had trained the two pilots aboard Flight 804, and that they had extensive experience, with about 8,500 flying hours each. “That is quite enough experienced for this aircraft type,” Husam Alhami said in an interview from Cairo. “Both of them were very much able to hold an aircraft for the weather, or technical deficiencies,” he said.

If technical error was to blame, it is not clear why the pilots failed to send a distress signal to nearby air-control towers. Aviation expert Bertrand Vilmer told France 24 on Thursday that aircraft were designed to keep flying for several minutes after being disabled, perhaps by a fire on board or sudden decompression. “The pilots should have time to say something in the mic,” he said.

There’s also the possibility of deliberate pilot action. Suicidal pilots have deliberately caused two major accidents in recent years — including one in an EgyptAir flight. A Germanwings plane crashed into the French Alps in March 2015, when the co-pilot Andreas Lubitz slammed it into the mountains, killing 150 people on board. Similarly, an EgyptAir co-pilot deliberately crashed his Boeing 767 into international waters off the coast of Massachusetts in 1999, killing all 231 passengers and crew.

After the U.S. National Transportation Safety Board ruled the 1999 crash had been deliberate, Egypt conducted its own investigation, and said the plane had crashed because of a technical error with the aircraft. On the voice recorder from the cockpit, the co-pilot, Gamil Al-Batouti, was heard turning off the engines while the captain was in the toilet, and then saying to himself in Arabic, “I put my faith in Allah.” The controversy over the crash lasted years.

Correction: This article originally misstated the departure point of a hijacked Egyptair flight in March. It was Alexandria, Egypt. 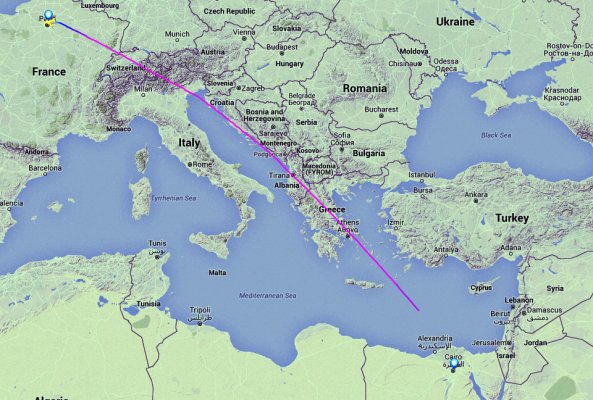 Search on for EgyptAir Plane
Next Up: Editor's Pick