Standing beneath a portrait of modern China’s founding father Sun Yat-sen, Taiwan’s new President Tsai Ing-wen was sworn into office Friday, following her landslide victory in January elections that threatens to drive a wedge between the ever more independence-minded island and an increasingly hawkish Beijing.

“At this moment, Taiwan’s situation is very difficult,” said Tsai in her inauguration speech. “I invite every fellow citizen to carry the future of this country.”

That constitutional proviso was inconsequential, though: Taiwan’s flat-lining economy meant Ma’s approval rating dipped below double digits during his final stint in office, as a financially embattled populace railed against stagnant wages, rising costs and the perceived erosion of sovereignty of Ma’s closer ties to Beijing, especially as they failed to deliver the financial boost he banked on.

“The last couple of years of the Ma Ying-jeou administration pushed people into more ideologically pointed positions,” says Rana Mitter, professor of the history and politics of modern China at Oxford University. “The relationship [with China going forward] will be cooler, but I don’t think in any sense we are likely to go back to the really bad days.”

A deterioration in cross-strait relations would have serious consequences for regional stability, given Taiwan is a staunch U.S. ally, and Washington and Beijing continue to spar over the latter’s expansive territorial claims in the South China Sea. In December, Washington inked a $1.83 billion arms package for Taiwan, much to Beijing’s ire, and the U.S. Navy has even been deployed when tensions heated up in the strait.

“The arms sale shows America’s commitment to Taiwan,” says Zhu Feng, dean of the Institute of International Relations at China’s Nanjing University. However, “the U.S. would prefer to maintain the status quo rather than use Taiwan in a rebalancing strategy.”

That status quo — Taiwan as a de facto independent nation yet, due to Chinese pressure, without international recognition — is increasingly unsatisfactory to the island’s 24 million people. China claims Taiwan as part of its territory despite the island’s effective split from the mainland following the routed Nationalists’ flight across the strait at the end of the nation’s civil war in 1949. (Taiwan’s constitution claims the whole of the mainland also.) Nevertheless, ties have warmed considerably over recent years based upon the “1992 Consensus,” which states that there is “one China,” even if both sides stubbornly insist that it is the legitimate power — the geopolitical equivalent of agreeing to disagree.

Tsai’s DPP refuses to acknowledge the 1992 Consensus, though, historically favoring formal independence, a prospect Beijing insists would herald a military response. Still, Tsai pragmatically obfuscated this key point within the DPP’s founding charter in the recent campaign. Zhu takes this as a sign “stability and workable communications” between the two sides will continue. “I don’t think Tsai will suspend all the channels her predecessor has established,” he says, “and I don’t think Beijing will use the upper hand policy to tightly corner Taiwan.”

Tsai made nods towards reconciliation in her inauguration speech, describing the 1992 Consensus as a “historical fact” and highlighting Taiwan’s current “constitutional system,” which is based upon One China, even if she did not explicitly endorse that key principle.

A crowd of 20,000 gathered to witness the inauguration, with a float dedicated to Sunflower Movement — a student-led popular uprising that occupied the national parliament in 2014 in protest of stealthy trade deals Ma signed with the mainland — prominent in the parade. “Taiwan has been a model citizen in global civil society,” Tsai told the crowd, “Since our democratization, we have persisted in upholding the universal values of peace, freedom, democracy and human rights.”

The relative status of China and Taiwan has shifted significantly since the last DPP administration was voted in 16 years ago — a victory that plunged cross-strait relations to arguably their lowest ebb of recent times. In 2006, Chinese GDP was about six times that of Taiwan; today it is about 20 times, and six of China’s 32 provinces have larger GDPs than Taiwan. “China has more chips to bet on Taiwan, to press Taiwan for compromise,” says Yang Tai-shuenn, professor of political science at Chinese Culture University in Taipei.

Tsai certainly has plenty of work to do. Foremost will be revitalizing the now sluggish economy of what was once considering the world’s manufacturing powerhouse. Exports were $285 billion in 2015, down from $320 billion the year before. Taiwanese wages have not meaningfully increased since 2008, growth was less than 1% last year and youth unemployment is rising. Whereas Ma bet on closer links with China, the world’s second largest economy, Tsai’s “Look South” policy emphasizes trade with South, East and Southeast Asia. Tsai is also looking to encourage some of the Taiwanese businesses that have invested on the mainland to move home, and for Taiwan to join the Trans-Pacific Partnership (TPP) free-trade bloc, despite local concerns about the safety of imported U.S. pork. Beijing typically thwarts Taipei’s efforts to forge such links, though it is impotent in this case owing to its own shunning of the TPP.

It is a bold strategy by Tsai though a risky one. “The Taiwanese government is not so resourceful as before in the 1990s, and I strongly doubt how much the government will be able to subsidize businessmen to move away from China,” says Yang.

Tsai made broad election pledges, including boosting jobs for school and university graduates, improved care for the elderly, and developing Taiwan’s traditionally poorer southern regions. Such programs will be expensive, though, and considering the mainland accounts for 45% of Taiwan’s overseas direct investment, convincing businesses to diversify elsewhere will require significant incentives to offset the sizeable risks.

“There is a strong integration between the mainland and Taiwan,” says Mitter, “and it would be increasingly difficult for Taiwan, as a very advanced economy but a relatively small one, to declare that this huge economic giant on its doorstep hadn’t relevance, and simply to look purely at partners further away, who in the end had less direct affinities toward Taiwan.”

The cost of cooling ties is already apparent. Thanks to Ma’s reconciliatory efforts, there are now 890 cross-strait flights each week from 61 mainland airports. But Chinese tourists to Taiwan, accounting for 40% of last year’s 4 million arrivals, have fallen by a fifth since Tsai’s election, according to Taiwan’s Tourism Bureau. Any further decline in this $10 billion per annum industry would be “serious,” says Yang. It is unclear what exactly has prompted the drop — both sides blame the other — though a patriotic backlash is manifest on Chinese social media.

Read More: Mainland Chinese Students in Taiwan Don’t Know How to Respond to the Elections

“I don’t like our government’s way of trying to influence the Taiwanese by benefiting them with trade,” wrote one user on China’s microblogging website Weibo this week. “Separatists would rather be America’s dog than be Chinese … We should be ruthless and make them feel pain, so they understand the situation.”

Another forum of tension may be the South China Sea. Beijing claims vast swaths of ocean plunging south from its coastline, marked by the so-called Nine-Dash Line, but this resource-rich territory is also claimed by a hatful of neighboring nations, including Malaysia, Vietnam, the Philippines and Singapore. Owing to their shared history, Ma’s administration had effectively backs China’s claim of sovereignty over the disputed territory, even if Taipei insists it rather than Beijing is the legitimate power.

Earlier this month, the government-linked Chinese (Taiwan) Society of International Law submitted written evidence to the Permanent Court of Arbitration in the Hague, arguing Taiwan’s claims in the disputed waters, thus likely delaying what was an imminent decision on a complaint filed by Manila. However, given her more Taiwan-centric outlook, and being unbound by the shared principle of One China, “Tsai Ing-wen’s administration may stay away from the South China Sea dispute,” says Zhu.

Tsai will still have a tightrope to walk. Any independence chatter will herald a stern rebuke from Beijing, which will be especially unwilling to countenance “secessionist” rhetoric in the run up to next year’s 19th national congress of the Chinese Communist Party. Tsai has a reputation as the “brain trust” of the two-state lobby, says Yang, though may be persuaded to extend the pragmatism that characterized her election campaign into the Presidential Office. Banging the independence drum is how politicians score domestic popularity points, meaning Tsai will have to be alert to ensure moderate voices remain dominant. “Tsai Ing-wen is a politician of a later generation,” says Mitter. “She’s been careful in not putting forward the Taiwan independence agenda in a very explicit way.”

Whether Tsai’s speech will placate Beijing remains to be seen. In what looked like a foreboding omen, Taipei Zoo was forced Tuesday to deny reports that Tuan Tuan, a giant panda gifted from China to Taiwan in 2008 and whose name means unity, had died the previous day. Zoo spokesman Eric Tsao rushed to insist that Tuan Tuan was “in good health.” Only time will tell whether cross-strait relations remain likewise. 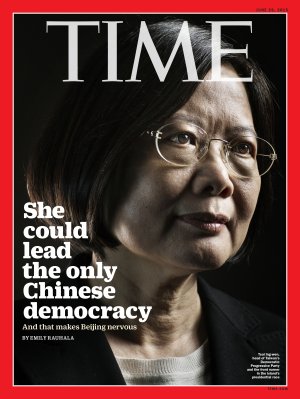 Behind TIME's Cover With Taiwan's Tsai Ing-wen
Next Up: Editor's Pick