Who knows what it was really like to be a private eye in 1970s Los Angeles? Most of us have only the movies as a guide, and Shane Black (Kiss Kiss Bang Bang, Iron Man 3) resurrects the genre in The Nice Guys, a comedy as boldly insouciant as a wild Qiana shirt.

The modest pleasures of The Nice Guys lie not in following the wiggy story twists but in watching Gosling and Crowe mix it up and mess everything up. Crowe’s Healy gets some of Black and co-writer Anthony Bagarozzi’s best, if slickest, lines, particularly in the Philip Marlowe–style voice-over that opens the film: “Love. I was in love once. Marriage is buying a house for someone you hate.”

You can see why things have gone south for Healy: he lurches through the streets of Los Angeles in a rumpled blue leather jacket, his face like a bed that’s been slept in. He and Gosling’s sad sack March were destined to connect, though they needle each other like an ancient, irritable husband-and-wife pair. Gosling never stops running through the paces of his patented dry-as-gin wiseacre routine, but damned if it doesn’t work every time. He gets most of the movie’s clumsy pratfalls and silly sight gags, pulling off each one with “What, me worry?” aplomb. At one point we see him in his skivvies, skimming through the water of a human-size fish tank, in pursuit of two sexy mermaid party girls in need of “questioning.”

Being a real-life detective in ’70s L.A. couldn’t have been anything like this, but Gosling fits right into Black’s farcical vision. As polyester goes, he’s the real deal. 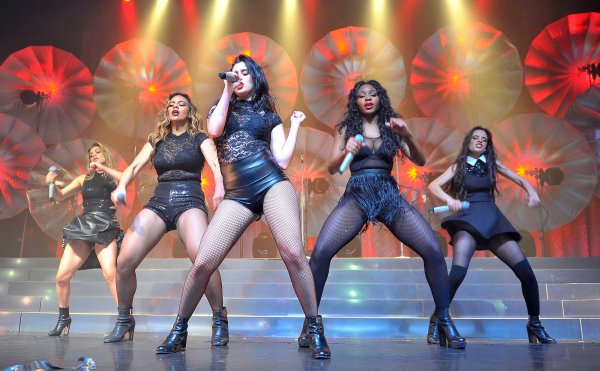 Fifth Harmony Updates Girl Power for the Present
Next Up: Editor's Pick