North Carolina Gov. Pat McCrory, under fire for signing into law a bill that forces transgender residents to use the bathroom that corresponds to their sex at birth, is blaming Congress for not updating the nation’s civil rights laws.

In an interview with TIME, the Republican said the patchwork of non-discrimination laws at state and local levels is inconsistent, and the Civil Rights Act could resolve contradictions over discrimination in schools, businesses and government buildings. McCrory, who is facing a tough re-election bid this November, also vowed to continue his fight against President Barack Obama’s orders that schools allow transgender students to pick their own restrooms or face a cutoff of federal dollars.

“As a country, Congress needs to step up and clarify the Civil Rights Act, which hasn’t been updated for decades,” McCrory said by phone on Wednesday. “A lot of things have changed since then, including the Supreme Court decision on gay marriage. There’s been dramatic change.”

Congress is considering a comprehensive non-discrimination law that would add protections to LGBT Americans. The Equality Act has attracted supporters from both parties, but it’s unlikely to make its way to the President’s desk before he leaves office early next year.

McCrory said he is aware of that legislation but didn’t know enough about it to endorse it. But he said it’s time for Congress to do something on the issue on discrimination. “Congress has been sitting on the sidelines,” he said. “Every city and state and town has its own non-discrimination ordinances that are very inconsistent.”

McCrory signed legislation that effectively undid one of those local policies. Charlotte, N.C., was among the last major American cities to adopt such a measure—decades after Minneapolis pass the first one in 1975. Some in the GOP are left scratching their heads over why these are controversial.

“Non-discrimination laws belong at the federal level and they have not been updated,” McCrory said.

LGBT rights advocates have been tough on McCrory and the Republican-led legislature, urging them to scrap a law that, by some estimates, has cost the state’s economy $500 million. Corporate America is lined up against the measure, too, and have recruited conservative mega-attorney Ted Olsen to write a friends-of-the-court brief on their behalf.

McCrory said the Left started this fight, and have proved effective opponents.

He met recently with the president of the nation’s largest LGBT group, the Human Rights Campaign (HRC), and came away calling him “Machiavellian.”

Griffin has, and it has found some success. “From across the country, the response has been yes, we’re with you,” Griffin said of the corporate allies. That has left McCrory dangling. “He’s found himself on a very lonely island when it comes to defining a legacy based on bathrooms,” Griffin said.

Entertainers have announced boycotts until the law is changed, and some Mayors and Governors have banned official travel to North Carolina. McCrory called it hypocrisy, and cited a transgender American Airlines employee, Candis Cox-Daniels, whom he met. McCrory later posited how she would fare in New York state, where Gov. Andrew Cuomo has banned most state employees from going to North Carolina.

“New York does not allow Candis Cox to change her birth certificate. North Carolina does,” McCrory said. “Our laws are stronger than New York’s laws.”

That is little consolation to Cox-Daniels, who is telecommuting to her job at the Raleigh-Durham International Airport. Her corporate counsel has advised her not to go to her workplace because it falls under the law that would require her to use the men’s room. And North Carolina’s birth certificate policy is only available to those who can prove they have had reassignment surgery, which can be medically dangerous, costly and unnecessary.

“This was not an issue that I had even heard of. We did not seek out this issue,” McCrory said. “The HRC, I give them credit. They are more powerful than the NRA.”

“The Right is often criticized—and rightly so—for wanting to getting involved in the bedrooms,” he added. “The Left is wanting to get involved in locker rooms, showers and bathrooms. It was working pretty well when we were just dealing with it. … I don’t think government should tell the private sector what their locker room, shower room and bathroom policies should be.”

But that is, however, what the North Carolina law did for its public buildings. “There is selective outrage by the corporate media and entertainment elite,” he said. “There is a lot of learning and a lot of confusion and complexities that both sides aren’t talking about.” 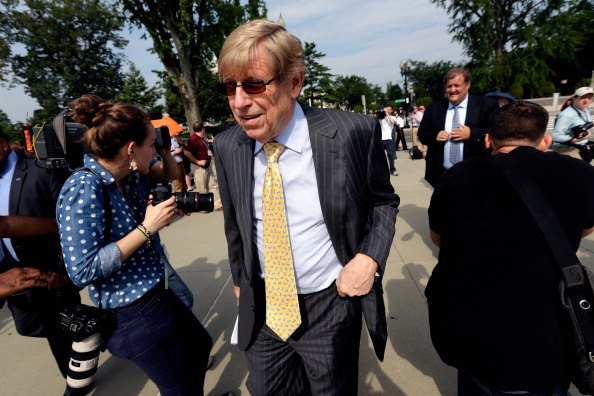