When the three female freshmen at the center of Neighbors 2: Sorority Rising, out May 20, enter their first frat party, they’re met with drunken propositions, neon arrows pointing upstairs and a banner that reads NO MEANS YES. Exiting abruptly, one remarks, “It was super rapey in there.”

While the right to party might not be inalienable, the right to do so without fear—at a time when research shows that 1 in 5 college women is sexually assaulted—is worthy of exploration. You just might not expect it to come in the summer’s raunchiest comedy. Amid vomit gags and scrotum jokes, director Nicholas Stoller delivers feminist heroines whose fight to smoke pot in peace is about more than just that.

The sequel to Stoller’s 2014 comedy sees that movie’s foes—Zac Efron’s former frat boy Teddy and thirty-something parents Mac (Seth Rogen) and Kelly (Rose Byrne)—joining forces to take down the sorority that’s just moved into Teddy’s old frat house, next door to the home Mac and Kelly are trying to sell. But that sorority was started by those three frustrated freshmen as their answer to “rapey” frat parties and an actual rule of the National Panhellenic Conference that sororities can’t have alcohol in their houses. Obviously, they aren’t going down without a fight.

It’s not lost on Stoller that it looks a little out of touch to make a movie about a sorority with a writer’s room full of men—five, if we’re counting, including Stoller and Rogen. “We were like, well, we’re going to need to have women writers on this so we don’t make the mistake of writing the characters like guys,” he says. So he convened a roundtable of female comedy writers and hired two, Amanda Lund and Maria Blasucci, to stay on as on-set writers.

Lund and Blasucci weren’t just there to consult on scenes involving women. “They pitched jokes for everyone,” says Stoller. “I was just excited to have more comedy minds in the movie.” But he admits that they offered a perspective he couldn’t have offered even if he had wanted to. “As a guy, I’m just not going to think of certain kinds of jokes or a certain kind of attitude because it’s not how I grew up, or it’s not how my brain works.”

“They got how important this movie was for showing women in a positive light, and the balance between making these girls really funny and making them mean something,” says Blasucci of the male writers. “They always wanted them to have voices, and we just came in to help them get those voices to sound female.”

Part of that process was ensuring that those voices, which belong to Chloë Grace Moretz, Kiersey Clemons and Beanie Feldstein, spoke in terms befitting the gross-out comedy of which they were a part. Blasucci recalls a debate about a scene in which the young women wield used tampons as weapons. “When we were writing it, everyone was like, is this too gross? And we all stepped back and [asked,] ‘Well, why is that gross, and yet in the first [movie] you can have the daughter with a condom in her mouth?’”

Comparing the relative gross-out factor of male and female secretions may not seem like a feminist discussion of the highest order, but to Stoller, it was crucial that the female protagonists in his sequel be every bit as disgusting as the frat brothers in its predecessor. “You can certainly argue that both the guys and the girls are too gross,” he says, “but that’s fine.”

Beyond their quest for equal opportunity gross-out potential, the writers also knew they had to face the realities of sensitive subjects like rape and sexual assault. They never shied away, Lund says, “because it’s the truth of what’s happening” on campuses across the country. Having once been college women themselves, Lund and Blasucci were taught not to leave their drinks unattended, not to accept a drink from anyone they didn’t know—rules they adopted in order to protect themselves, and which in turn inspire the movie’s protagonists to opt out and create a space where they get to write the rules and serve as gatekeepers.

Part of what keeps the sorority girls’ feminist teachings from ever feeling pedantic is that they’re not aimed, at least directly, at the audience. As much as he’s a fully formed character, Teddy is also a vessel for progressive enlightenment. He ends up as a proxy for the audience member who isn’t yet steeped in feminist principles. “Teddy is the ultimate bro, but you can’t ever blame or hate him,” says Lund. “It’s not about punishing him—it’s about seeing his evolution into becoming a feminist.”

“It’s like being the jester in the court,” says Stoller. “It’s a way to get a point across in a palatable way to a large audience.” 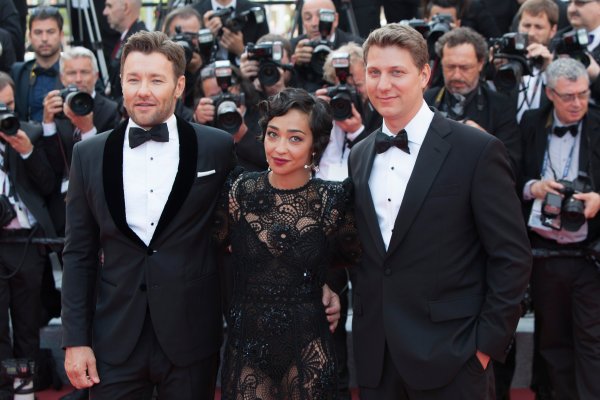 Review: Superb Civil Rights Drama Loving Is Both Timely and Timeless
Next Up: Editor's Pick