Serena Williams poses with the winner's trophy at the Bir-Hakeim bridge after winning the women's final of the French Open tennis championships at Roland Garros in Paris, France on June 6, 2015.
Anadolu Agency—Getty Images
By Sean Gregory

Tennis’ Grand Slam summer begins on May 22, as the 2016 French Open gets underway. The start will be a little awkward: for the first time since 1999, Roger Federer won’t be playing in a major. The 18-time Grand Slam champ had played in a record 65 consecutive Slams, but a back injury will force him to miss this year’s French. Even without the éminence grise of the game at Roland Garros, there are plenty of storylines worth following. Here are five you need to know:

1. Serena Slam For the second time this year, Serena Williams will be trying to tie Steffi Graf’s record for most career Grand Slams, at 22. (Williams lost to Angelique Kerber in the finals of the Australian Open). Williams has played in only four events in 2016: at the Italian Open last week, she secured her first tournament win in nine months by ousting fellow American Madison Keys in the final. Last year, a nasty flu almost kept Williams out of the French final: playing sick, she won her third French Open. Roland Garros, however, is the only Grand Slam event Williams has failed to win in back-to-back years. Can she pull it off at 34?

Read More: The Grand Slam is Dead, But Serena Will Still Live Loud

2. No Djoke. Novak Djokovic is enjoying one of most dominate stretches in tennis history. Since the start of 2015, the Serbian owns a 119-9 match record. A French Open victory would give Djokovic a career Grand Slam, and his fourth straight major victory, dating back to last year’s Wimbledon. The last men’s player to win four straight was Rod Laver, who swept the Grand Slams in 1969. A Roland Garros victory would also give Djokovic a shot at Laver’s calendar-year Slam. The French has long eluded Djokovic — he’d be the first player to ever win a title on his 12th try. Last year, he beat nine-time champ Rafael Nadal in the quarters, only to fall to Stan Wawrinka in a finals upset. Djokovic, who grew up playing on clay courts, has had mixed-results during French Open tuneups: massive underdog Jiri Vesely knocked him out of Monte Carlo in Djokovic’s opening match, and he fell to Andy Murray in the finals of the Italian Open. But he also beat Murray to win Madrid. So why not Roland Garros?

3. Dandy Andy? It’s been nearly three years since Andy Murray won a major; at Wimbledon in 2013, he ended Great Britain’s infamous 77-year title drought on that hallowed grass. Is the Scotsman due? He rounded into form at the Italian Open, beating Djokovic in the final. In early May, Murray and his coach, former world number-one Amélie Mauresmo, announced a mutual split: with Mauresmo’s family obligations, and duties as France’s Fed Cup captain, she couldn’t spend sufficient time with her student. Their two-year partnership broke new ground: Murray was the first high-profile men’s player to hire a woman as coach. Murray has hinted at a possible reunion with Ivan Lendl, who coached Murray during his two Grand Slam wins, Wimbledon and the 2012 U.S. Open. But there’s plenty of time for Murray to sort out the coaching drama. His most urgent task: crash continental Europe’s 12-year stranglehold on the men’s title (courtesy, for the most part, of Rafael Nadal, who’s won nine of them).

4. Keys To Success. After reaching last year’s Aussie Open semis, Madison Keys, 21, became America’s next great hope for the post-Serena era, whenever that arrives. She’s never gotten past the third round of the French, the tournament that traditionally gives Americans, who mostly grow up competing on hard courts, the most trouble. But expectations will soar this year because Keys made a surprise run to the Italian Open finals, where she lost to Williams. It was the first time two American women made a clay-court final since Serena beat sister Venus at the 2002 French Open.

In the Italian semis, Keys took out a French Open title threat, Garbing Muguruza of Spain, who’s ranked fourth in the world (Keys in now 17th). “I mean, I can play on clay? Yes!” the New York Times quoted Keys as saying after she beat Muguruza “It’s something I’m really proud of myself for, and hopefully I can take the experience and use it in the next couple of weeks. It’s definitely going to be something that I remind myself of going into every clay-court season: ‘Yeah, I made the final of a red-clay tournament. I can do this thing.’”

5. Remember Rafa. It’s almost sinful to preview the French Open without mentioning Rafael Nadal, despite mixed results in recent Slams. The 14-time Grand Slam champ is going for a tenth title at Roland Garros. In the open era, no player — man or woman — has ever won double digit trophies at a single Grand Slam event (Martina Navratalova has nine Wimbledon titles).

Nadal’s the greatest clay court player ever. His almost desperate slides and charges on the Roland Garros dirt have defined the French for more than a decade. In April, Nadal won clay tuneups in Monte Carlo and Barcelona back-to-back, beating names like Murray, Wawrinka and Kei Nishikori along the way. In May, he lost to Murray and Djokovic in Madrid and Rome, respectively; it was Djokovic who handed Nadal just his second loss ever at Roland Garros, when he knocked Nadal out of the quarterfinals a year ago. Tennis fans are pining for a rematch. Let the fun at the French begin. 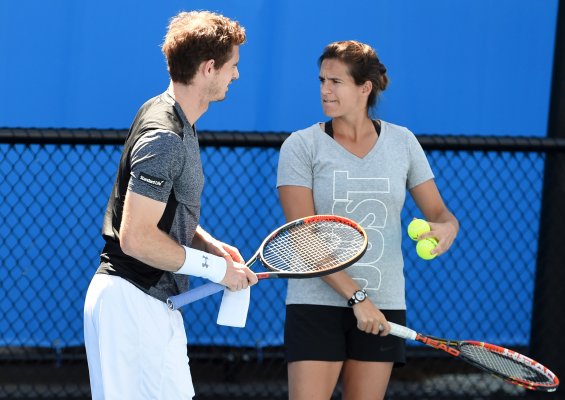 Andy Murray Breaks Off from Coach Amelie Mauresmo
Next Up: Editor's Pick