I'm an Iranian American and I Used to Feel Black

Negin Farsad is a comedian and the author of How to Make White People Laugh.

Like most comedians, I have a graduate degree in African-American Studies.

To be clear, I’m actually an Iranian-American Muslim female comedian-slash-filmmaker. But here’s the thing: I used to feel black. Sometimes “kinda pretty black,” occasionally “really black,” and, depending on how drunk I was, “Don Cheadle.” I’m not technically black. Or even on the black spectrum. I’m Iranian, an ethnically brown Muz type, and definitely not black. Further evidence of not being black: I can’t play basketball or U.S. President at all.

You could identify blackness by external appearance. I fail on that count. You know, because I’m not black. You could define it based on the one-drop rule, which is to say if you have any black ancestry, however remote, you’re black. I fail on this count, too. I’ve never done a family tree and I’ve never been the subject of one of those reality TV shows where they trace the family history of say, Ben Affleck, and he finds out that he and Matt Damon are connected eight generations back through a soldier in the Revolutionary War who wore custom pantaloons. I’m pretty sure my ancestors are Persian. So, I don’t rate on the one-drop rule, either. Basically, external appearance and CSI-style blood forensics don’t get me closer to blackness.

But then there’s the kind of blackness that’s defined by its opposition to whiteness. It’s the binary we’ve all been living with. The Civil Rights movement was driven by black folk against white folk who were trying to keep them down. Slavery was black folks being owned by white folks. The race question in the United States since the beginning of its inception has been Black in Relation to White. Everything in the U.S. is black and white, ebony and ivory, Black Eyed Peas and White Stripes. But what if you don’t fit in this binary?

I guess what I’m saying is, I felt black in that I wasn’t white. My definition of blackness was never about the externalities, it was about the gooey, inexplicable internalities.

Growing up with immigrant parents, I felt like my minority and ethnic status was the flashpoint of national blame for some kind of social tension, but I didn’t exactly know what or why or how. I felt like I was or should have been involved in the struggle, but the only nationally recognized struggle was (and basically still is) the black struggle. So my still burgeoning mind decided to embrace the struggle, embrace that blackness. It was the only narrative around “otherness” out there.

So I felt the blackness and I applied to Columbia University’s Graduate School of Arts and Sciences for a degree in African-American Studies and, miraculously, I was accepted.

My calling was to end the racial divide. I was a part of the struggle—the only struggle that had things like leaders, legitimate entities, graduate programs, mainstream recognition and pop stars. I felt so totally committed, so totally in the thick of blackness. That struggle didn’t include any Iranians, but at the time I thought: “close enough.” That’s what a lot of hyphenated Americans say to themselves when they glom onto the larger minority groups: “close enough.”

But I should note that I went to grad school in the aftermath of 9/11. That event sparked a little something we now like to call Islamophobia. I thought this little spike in Muz-hate was going to dissipate quickly. How naïve. I really thought, how could people associate this kind of violence with a whole religion (Islam) and an entire region (the Middle East)— that’s just crazy! That’s like stereotyping 1.6 billion people. Who does that? Americans. We Americans do that. Post 9/11, mainstream American media was all about creating the following critical associations:

But it’s not like Muslims were so totally adored before 9/11. When my parents moved to Virginia during the Iran Hostage Crisis, my brother would get beaten up in school for being Iranian. We lived in Virginia until I was 7-years-old, and I remember in kindergarten a girl yelled at me for being “a communist.” How embarrassing for her: she had the political regime all wrong! I came back with the very clever retort: “You mean Islamic Republic.” And that’s about as much as either of us could say on geopolitics. But for 5-year-olds, that was pretty good.

After the hostage crisis, Muslims kinda went on the back burner. Americans got real busy hating on Russians. But not too busy for the classic hating on black people. Then we had Mexicans to worry about, gotta save some hate for them. Plus all those Asians who apparently drive badly . . . oh, bigotry had a busy schedule! But 9/11 changed the national discourse by giving America a brand-new enemy.

I was in grad school, hard at work being politically black—preaching the words of Medgar Evers and Malcolm X. I memorized an argument on the critical race theory underpinning of The Fresh Prince of Bel- Air. I was prepared to change my name to “Tyler Perry Presents Negin Farsad.” I was ready to fight for black causes whenever and wherever!

My classmates were sorta like, “Um, yeah, could you stop doing that? It’s weird.” Didn’t I have my own people to fight for?

And that’s when it struck me: I wasn’t black, or Mexican or Asian or Russian. I was an Iranian-American Muslim female. To large swaths of the American public, that meant I was a possibly dangerous brown person who potentially sympathized with Al Qaeda or Hezbollah. To other swaths of the American public, I was the kind of person who pronounced “Iran” in a way that didn’t make it sound like a past-tense verb.

I needed to come out of the closet. I wasn’t helping anyone by glossing over my real identity. This was my struggle, and I had work to do! There were 1.6 billion Muslims worldwide whose identity was being hijacked! People needed to know that secular, fun Muslims who smell nice are the norm—more the norm than the dusty brown people we were seeing on television. And I had to let people know it with the only tool I had: comedy. (Actually, I also had one of those little wrenches that came with the IKEA Fjälkinge shelf, but I didn’t think I could take on bigotry with that.)

Even though I went to graduate school for African-American Studies and public policy (not at all for comedy), and even though I didn’t know it at the time, graduate school was preparing me for this work. Getting that education made me realize how little time we all spent exploring other minority groups. It made me realize that the hyphenates were getting the short end of the stick, and that the stick we did get was from a really old twig that had already served its time as a snowman’s right hand. I also figured out that if you want to broaden and tackle the issue of race relations with jokes, I guess it’s not bad to have an academic foundation in race relations. 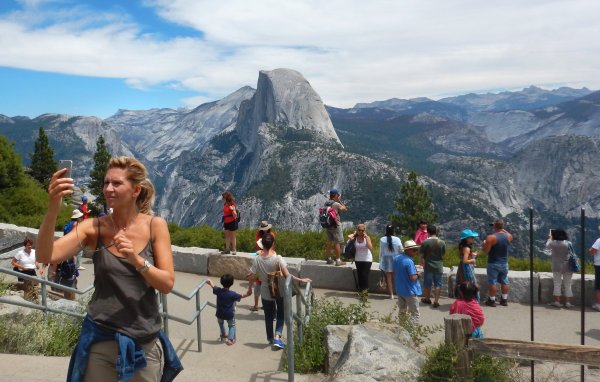 How Technology Affects Our Relationship With Nature
Next Up: Editor's Pick