I Felt the Bern But the Bros Are Extinguishing the Flames

Democratic presidential candidate Bernie Sanders (D-VT) delivers his concession speech to a group of supporters at the Henderson Pavilion in Henderson, Nev., on Feb. 20, 2016.
The Washington Post/Getty Images
Ideas
By Sally Kohn
Sally Kohn is a CNN political commentator, activist, host of the podcast State of Resistance and author of The Opposite of Hate: A Field Guide to Repairing Our Humanity.

I’m having a hard time being a Bernie Sanders supporter at the moment.

This is unacceptable behavior. Sanders has condemned it, but not forcefully enough for my taste. Sanders said in a statement:

This is true to a point. Unlike the Donald Trump campaign, which has been not entirely but definitely largely based on implicitly violent denigration of Mexicans and Muslims from a candidate who explicitly praises violence from the stage, Sanders and most of his supporters are motivated by a deep commitment to non-violence—which is one of the main reasons they oppose Hillary Clinton’s hawkish tendencies. And unlike the winking and nodding Donald, Sanders has always been clear in condemning any harassing behavior or worse on the part of his supporters. But that doesn’t mean the behavior isn’t there and isn’t deeply problematic in some more systemic way.

The Bernie Bros are real. I’ve been the target of Bernie Bros on social media, and when I endorsed Sen. Sanders at a Brooklyn rally in front of more than 30,000 people, a not insignificant portion of the audience booed me for praising Clinton in my remarks. Forget the plainly self-defeating results of that behavior in terms of trying to recruit would-be Hillary supporters to Bernie’s column. It was disturbing from a visceral, human level.

It’s also too easy to suggest that Sanders’ supporters are a different kind of angry than Trump’s. Are we entirely sure about that? The populist right may be more inclined toward misogyny and xenophobia, but the populist left is not immune from these afflictions. And as I’ve written before, when you see progressive white men—many of whom enthusiastically supported Barack Obama’s candidacy—hate Clinton with every fiber of their being despite the fact that she’s a carbon copy of Obama’s ideology (or in fact now running slightly to his left), it’s hard to find any other explanation than sexism. Either way, the brutish, boorish behavior of Bernie Bros (and their female compatriots, too) was a huge reason I was reluctant to seemingly side with them in endorsing Sanders—and has been the only reason I have ever questioned my decision to do so since.

But what’s perhaps most disconcerting to me about the events in Nevada is that if you remove the ideological valence, it’s easy to see an anti-establishment movement rising across the U.S. that is disturbingly proto-violent. Let me be clear: I am all for populist mass social movements and even anti-elite revolutions. The sooner the better. But what I am not for is hate and violence in the service of those ends, movements that seek to lift up their marginalized base by marginalizing others.

This is the philosophy behind Trump. I’m not saying that all or even most of Sanders’ white male supporters are violent xenophobes, but they are certainly angry, and in the past and present of America it is impossible to disentangle white male anger from gender and racial bias and resentment. This is, after all, all happening at a time when white male supremacy is finally, if only slightly, on the decline. It’s not inevitable that these voters’ anger would be captured and catalyzed by Trump and his message—and even more worryingly, by the truly dangerous spirit of a larger swath of his supporters. It’s not inevitable at all. But it is possible. And incidentally, being wary of the events in Nevada and the general bullying behavior of Sanders supporters throughout the campaign doesn’t make me a bad progressive or a bad Democrat. It makes me a good human being. And to not worry about any of this would be naïve.

Violence and intimidation thoroughly contradict and undermine the spirit of the movement that Sanders is hoping to ignite. Someone should tell all of his supporters that. 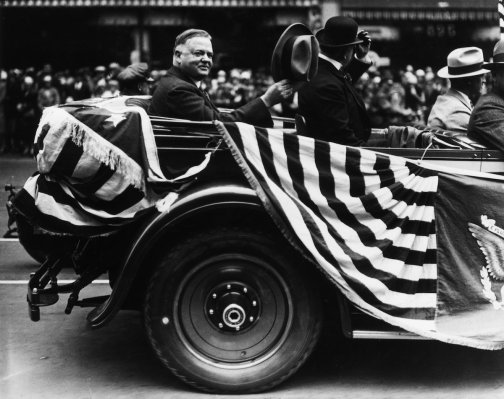 What Happened When a Non-Politician Won the White House
Next Up: Editor's Pick