Police officers patrol in front of supporters of visiting Zhang Dejiang, the chairman of China's National People's Congress, during a protest against him in Hong Kong on May 18, 2016
Paul Yeung—Reuters
By Nash Jenkins / Hong Kong

After a small pro-democracy march earlier in the morning, protesters were confined to designated demonstration zones, where they were outnumbered by police and media, and kept apart from a larger political gathering organized by Beijing loyalists, who brandished the Chinese flag.

Conspicuously absent were Hong Kong’s pro-democracy activists, whose plans of protesting Zhang’s arrival yesterday and today were quashed by extreme security measures that effectively render Wan Chai — a commercial district where Zhang is both staying and attending meetings — a no-go zone.

Nathan Law, a young dissident who heads the outspoken anti-China political party Demosistō, told TIME at lunchtime on Wednesday that his group was considering a protest on Thursday morning.

A day earlier, Law, who like his party colleague Joshua Wong came to local prominence during the 2014 pro-democracy Umbrella Revolution here, was slammed to the ground by a swarm of police officers for apparently stepping out of bounds in the protest area.

“This is why we need to protest,” Law told TIME shortly after the incident. “The Communist Party and the Hong Kong government are trying to create a fake picture of Hong Kong being very peaceful, where no one is voicing their opinion against Zhang Dejiang and China.”

Zhang is in town to attend a forum on a Chinese trade initiative known as One Belt, One Road, but many say there is greater political significance to his visit to Hong Kong — the first by a senior Chinese Communist Party member since the 2014 protests. Hostility towards Beijing’s sovereignty has intensified in recent months after five politically outspoken Hong Kong publishers disappeared and later turned up in the custody of mainland authorities, in what was seen by many Hong Kongers as an outrageous violation of the territory’s freedoms. 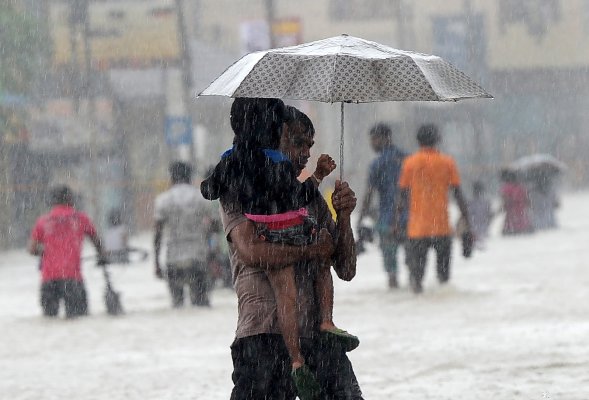 Hundreds Missing After Landslide and Rains in Sri Lanka
Next Up: Editor's Pick