French Politicians Have Decided to Fight Back Against Sexual Harassment

French Green Party deputy Cecile Duflot attends the questions to the government session at the National Assembly in Paris on Oct. 14, 2014.
Charles Platiau—Reuters
By Anne Penketh/Paris

Cécile Duflot, France’s former housing minister, remembers the day she stood up to speak in the National Assembly in 2012 and was greeted by wolf whistles because she was wearing a dress.

“I felt irritated, and shame for the chamber,” she says. “Such a thing had never happened to me in the whole of my professional life before becoming a deputy.”

“But that’s nothing compared to the events of the last few days,” she adds.

A deputy parliamentary speaker from Duflot’s ecologist party, Denis Baupin, was forced to resign on May 9, after eight women from the same party came forward to accuse him of sexual harassment. The Paris prosecutor is now conducting an investigation, while Baupin is suing France-Inter radio and the news website Mediapart for defamation after they published details of the allegations.

On Sunday, amid further revelations about the scale of sexual harassment of women politicians, the scandal took another turn when 17 female ex-ministers issued an open letter in which they announced “the end of impunity.” Saying that sexual aggression cut across all political parties at all levels, after the Baupin allegations “this time, it’s too much, omerta and the law of silence cannot carry on any longer.”

But why wait until now? Duflot is aware that sexism has been rife across French society for years, but for her it was time to act after Baupin tweeted a photo of himself and male colleagues wearing lipstick to mark International Women’s Day on March 8. It was portrayed as an initiative “to fight violence against women.”

That was the last straw for the alleged victims from the Europe Ecologie Les Verts party who decided to go public on seeing the message. Duflot had herself been aware of the case of one, fellow deputy Sandrine Rousseau, who told Mediapart that Baupin had tried to kiss her while pinning her against a wall in October 2011. A former deputy, Isabelle Attard, accused Baupin of “almost daily harassment with salacious, provocative text messages.” As most of the alleged incidents took place more than three years ago, prosecutions cannot be undertaken under the statute of limitations.

Duflot didn’t sound the alarm as Rousseau didn’t make a formal complaint. Now she has joined the 16 other ministers to end the conspiracy of silence. “We shall encourage every victim of sexual harassment and sexual aggression to speak out and make a complaint. We are asking our parties and political groups to check whether such acts have been committed, and if such is the case, to help the victims get out the truth,” the letter says.

Yet Duflot herself says she has suffered from sexual harassment but is not prepared to talk about it for “private reasons.” “I’m aware of the contradiction with what we’re saying, and I accept that,” she says. “I have been outspoken about this (Baupin) case. I want to help others to speak out.”

Another signatory of the letter is former culture minister Aurélie Filippetti. She filed a complaint in 2009 against her then partner, “rock star” economist Thomas Piketty, for assault which she reportedly later dropped. “I took it as far as I could,” says Filippetti, who is reluctant to talk about the incident. “When women file charges, they become the accused, and it can backfire. That’s what happened to me.”

According to Filippetti, a Socialist deputy, “that needs to change. What we need is sexual assault and harassment officers in police stations and gendarmeries. And we need education – mentalities need to change.”

France brought in legislation to penalise sexual harassment in 2012, but one of the difficulties is that the law is not being enforced. “The same people who bring in the law feel that they’re not affected by it,” says Duflot.

Another problem is that women who do come forward may end up losing their job, becoming a victim twice over.

Stories of sexism and sexual harassment in France are legion, the most recent cases having been reported at the student-led Nuit Debout (Up all night) protests in a central Paris square called to oppose a new labor law.

Last week, none other than Finance Minister Michel Sapin apologised to a journalist who had accused him of “twanging” her knickers. He admitted to “inappropriate behaviour” but denied harassing her. The apology came only days after 40 female political correspondents published an open letter denouncing the sexist and macho behaviour of French politicians.

A minister of former centre-right president Nicolas Sarkozy, Rama Yade, told the Journal du Dimanche newspaper on Sunday that “it’s not just verbal, but physical. There are people who grope you, who put both hands around your waist and pull you tight.” Yade, who was born in Senegal, is another signatory of the open letter.

The political establishment has meanwhile been accused of closing ranks to protect offenders. Exactly five years ago, when the French head of the International Monetary Fund, Dominique Strauss-Kahn, was accused of sexually assaulting a chambermaid in a Manhattan hotel (in a case which was later dropped), the reaction in France was initially muted. Many in his Socialist party believed he had been framed in a bid to prevent him from becoming president in elections the following year.

In an op-ed last Friday in Le Figaro, commentator Eloise Lenesley saw a pattern of “hypocrisy” where everyone knows what’s going on but only speaks out after the event. In the case of Strauss-Kahn, known as DSK, “it took the Americans parading him in handcuffs before the French press was forced to admit, at arm’s length, that he had enjoyed libertine parties.” The same thing happened with Baupin, the columnist said.

According to an official report in 2014, one in five women in France will be a victim of sexual harassment during their career. A recent poll carried out by the Elabe agency said that 78 percent of those surveyed believed it was “widespread” and 80 percent that France is “too laxist.”

Duflot acknowledges that France lags behind other countries in tackling sexism and sexual harassment. “It could be a cultural thing,” she says. “But that doesn’t mean it’s excusable.”

“We thought after DSK that things would change,” says Filippetti. “But they didn’t. Men don’t think it’s them, that’s the problem.” 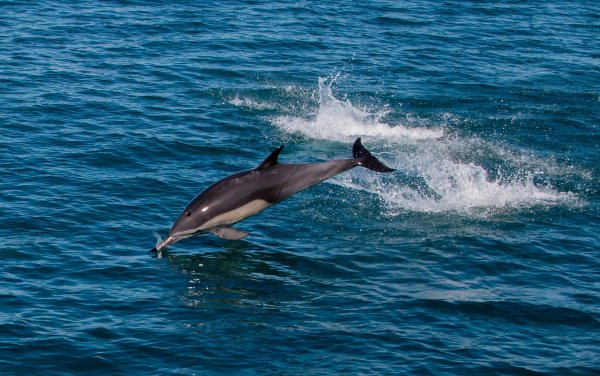 The World's Tiniest Porpoise Is on the Brink of Extinction
Next Up: Editor's Pick