The as-yet fruitless search for missing Malaysia Airline Flight 370 will continue for as long as possible, Australian Prime Minister Tony Abbott said Monday, reassuring relatives of the 239 people who were aboard that investigators are “well, well short” of scaling back efforts.

“This is an extraordinarily difficult exercise. … We are searching a vast area of ocean and we are working on quite limited information,” Abbott told reporters in Perth, the Associated Press reports.

“If this mystery is solvable, we will solve it,” he added.

A mammoth international search operation involving more than 10 nations has so far failed to turn up any debris from the Boeing 777, which vanished soon after departing Kuala Lumpur bound for Beijing on March 8. Satellite data indicates the twin-engine, 200-ton jetliner crashed in the southern Indian Ocean. Since March 20, planes and vessels have combed large expanses of those tempestuous waters, deemed some of the remotest areas of the planet. The case has become the longest disappearance in modern aviation history, and time is running short to find the plane before the battery on its black box recorder dies.

The search area moved some 700 miles north to a new expanse roughly the size of New Mexico last week, 1,200 miles southwest of Perth, Australia, based on a new theory that the airplane may have travelled faster and therefore run out of fuel sooner. But the only flotsam recovered has been unrelated trash.

The recovery of debris is deemed crucial to tracing where the aircraft entered the water. But three weeks after the plane disappeared, time is running out. The battery of the black box transponder only has another week of juice left, and an Australian black-box-detector ship Ocean Shield is slated to reach the zone in about four days. Without identified debris around which to focus search efforts, the task remains arduous.

New analysis indicates the sea floor of the new search zone — some two miles beneath surface — is cold, dark, covered in a gooey layer of dead plankton but, fortuitously, mostly flat. However, there is a troubling steep, rocky drop ending in a deep trench, the Associated Press reports.

In Kuala Lumpur, scores of angry relatives of Chinese passengers visited a temple Monday to pray for their loved ones. They arrived in Malaysia over the weekend to demand “evidence, truth, dignity” from the Malaysian authorities.

Back in China, though, state media implored relatives of the 153 Chinese nationals on the flight to arrange funerals for those presumed lost. “We need to comply with the fundamental norms of a civilized society and need to show the demeanor of a great power,” read an editorial in the government-run China Daily on Monday. 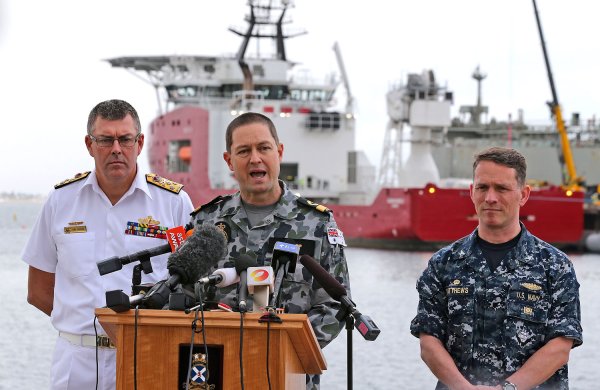 Time Short to Find Black Box
Next Up: Editor's Pick