Why the Golden State Warriors Should Be Very, Very Afraid

We already had to cancel those reservations for a San Antonio Spurs vs. Golden State Warriors Western Conference Finals, reservations made in, what, December? Now, it’s time to hold off booking that Warriors vs. Cavaliers, LeBron James vs. Stephen Curry rematch in the NBA Finals. The Oklahoma City Thunder have crashed these playoffs, first knocking off the Spurs in six games in the conference semifinals—winning two games in San Antonio, where the Spurs had lost only a single game in the regular season. And on Monday night, Oklahoma City erased a 13-point halftime deficit in Oakland—where the Warriors, owners of the best regular season record of all-time, lost only twice all season—to take Game 1 of the Western finals, 108-102.

Yeah, it’s time for Warriors fans to gnaw their fingernails.

Because it’s one thing if the Thunder simply outplayed the Warriors, or beat them at their own high-octane game. But Oklahoma City beat Golden State with its two best players, Kevin Durant and Russell Westbrook, each hitting only a third of their shots. (Durant finished 10-30 from the field, while Westbrook went 7 for 21.) Another problem: Oklahoma City’s size. The Thunder played a chunk of the fourth quarter with two centers, Stephen Adams and Enes Kanter, on the court at the same time. Golden State outscored Oklahoma City 15-2 on second-chance points. Adams, the third-year player from New Zealand, by way of the University of Pittsburgh, has emerged as an impact player this postseason. With Adams on the floor, the Thunder outscored the Warriors by 19 points. He finished with a double-double, 16 points and 12 rebounds. No player, on either team, made more of a difference.

Stopping Stephen Curry, repeat league MVP, is one thing. But how to slow down the dude with the Captain Hook ‘stache? (Adams caused some controversy with his remarks after the game; he called the Warriors guards “quick little monkeys.” He apologized, telling USA Today Sports, “it was just a poor use of words, mate.”)

All season, the talk was all about Golden State and San Antonio, San Antonio and Golden State (that LeBron and the Cavs would win the Eastern Conference was practically a given). The Thunder got a little tired of it. Amidst all the shouting about Steph, and San Antonio as a model sports franchise, it was easy to forget that Oklahoma City features two of the very best players in the world. Durant and Westbrook are explosive and healthy. They’re hungry to erase the talk that they’re playoff underachievers, two prolific scorers without enough supporting players, who suffered the bad luck of competing in the LeBron-Steph-Spurs era. When asked about guarding Curry prior to the series, Westbrook responded: “He’s a shooter. He’s not nothing I’ve ever seen.” The unmistakeable message: we’ve got a little chip.

We know it’s convenient to project the future off a single game of a seven-game series. We’re aware of the recency trap. But OKC’s win didn’t feel like a fluke. The Warriors have succeeded in the playoffs despite Curry’s injury issues. Still, let’s face it: his bum knee has thrown things off. The joyous vibe of the regular season is all but gone.

In the conference finals, the team that steals Game 1 on the road goes on to win the series 71% of the time. With their dramatic comebacks and Curry’s crazy shooting, the Warriors have defied probability for a long time now. The magic, however, can’t last forever. 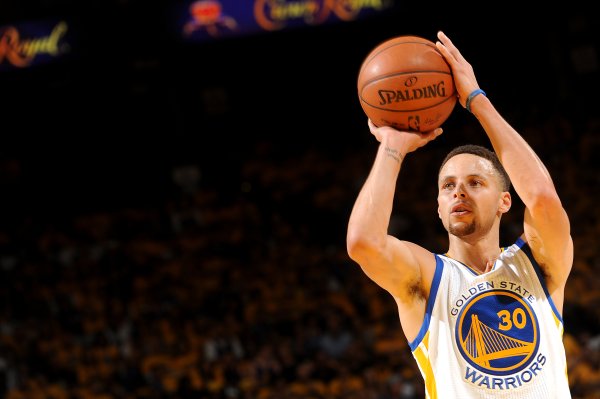 8 Times Stephen Curry Left People's Jaws on the Floor
Next Up: Editor's Pick