Donald Trump may be the presumptive Republican nominee, but that doesn’t mean the GOP is ready to rally around the leader, especially when he’s in trouble.

As the Republican Establishment continues a wary embrace of its bombastic nominee, the party’s head is making clear that he won’t mount a full-throated defense of Trump and on some issues won’t protect him at all, sending a clear signal to others in the GOP as its new standard-bearer faces a rough week in the press.

After the New York Times published a detailed account of Trump’s behavior with women over the years, including alleged unwanted advances and sexist comments, Republican National Committee Chairman Reince Priebus went on Fox News Sunday to talk about the election.

In a typical year, this would have been an opportunity for the head of the GOP to take a few shots at the newspaper, much hated among conservatives. Instead, Priebus repeatedly sidestepped calls to defend Trump’s character, instead making a tactical argument that voters don’t seem concerned, while other GOP lawmakers made themselves scarce to television bookers.

The interview came just days after a high-profile summit between Priebus, Trump and Speaker of the House Paul Ryan which aimed to bridge the substantial gaps on policy and temperament in the party. Many Republican operatives saw Priebus’ approach as emblematic of a broader concern over how the party should handle Trump’s nomination.

“There is a genuine concern that people don’t want to walk too far out on the plank with Trump only to discover there is something else damaging to the candidate or the party brand waiting to come out,” says former RNC spokesman Doug Heye.

Operatives believe the GOP’s modus operandi is going to be to let Trump handle his own problems. “”These are things that he is going to have to answer for,” Priebus told ABC’s This Week of Trump’s comments on women, echoed by one of Trump’s staunchest supporters, Sen. Jeff Sessions. “Of course, he has to answer and people will ask those questions,” the Alabama lawmaker said on the same program.

It’s a delicate equilibrium for a party that must balance its necessary embrace of Trump—who won more GOP primary votes than any candidate in history—with its desire to maintain its viability should his campaign explode. If they are seen as not backing Trump’s candidacy with gusto, they risk blowback from his grassroots supporters who might blame them for a loss; but if they go all-in, they could risk tying the party’s reputation to his campaign.

It’s not just Trump’s relations with women. During the Fox interview, Priebus let other questions about Trump’s character sail by. On his tax returns, which Trump has so far not made public, Priebus noted that 2012 nominee Mitt Romney paid a “dear price” for not releasing them sooner, then argued that it might not matter this year.

“Whether this issue is going to apply to Donald Trump in a negative way or not I’m not sure of,” he said, declining to parrot Trump’s oft-used rationale that his returns are under audit. “But so far, most things have not because he represents something far different than these particular individual issues.”

Pressed on a Washington Post report that Trump posed as his own publicist in long-ago interviews with reporters, Priebus didn’t even muster a defense. “I think that each individual person out there should evaluate our potential nominee based on the answers that he gives to these questions,” he said.

“He runs his own kind of renegade brand – they’re not going to defend everything about it,” says GOP consultant Kevin Sheridan, a veteran of the 2012 Romney/Ryan effort. “They’ll support him in keeping Hillary’s numbers down and support him down-ballot, and do what they can where they agree, but if it’s something personal to him and his controversies they’ll leave that to [Trump] to speak for himself.”

Still, Priebus’ approach is not entirely hands off. In recent weeks, the head of GOP has reiterated the party’s official distance from Trump on two signature proposals: the forcible deportation of 11 million people in the U.S. illegally and a complete shutdown of Muslims entering the United States.

“I believe our party is the party of the open door,” Priebus has said, even as Trump’s rhetoric indicated he hoped to close it. 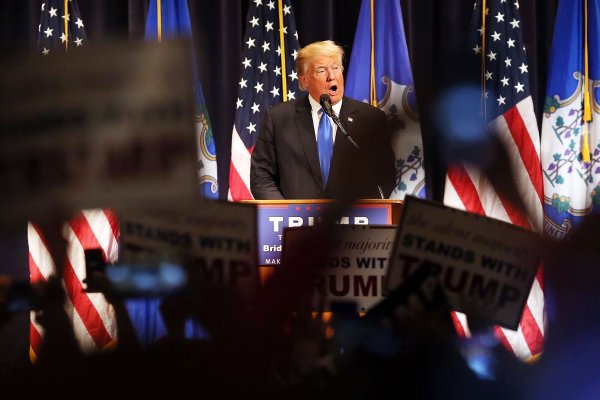