J.K. Rowling Has Choice Words for Donald Trump—and Some of His Detractors

J.K. Rowling built her career on a series about the triumph of freedom and justice over fear and bigotry—and these days, she sees those themes playing out in politics on both sides of the pond.

Accepting an award at the PEN Literary Gala at New York’s Museum of Natural History on Monday night, the Harry Potter author said that though her name has appeared on lists of most frequently banned literature, she was not offended—indeed, since many of her favorite authors appear on those lists, she is “flattered.”

Still, she says, “My critics are at liberty to claim that I am trying to convert children to Satanism, and I’m free to explain that I’m exploring human nature and morality, or to say ‘You’re an idiot,’ depending on which side of the bed I go out on that day.”

“It seems that unless a commentator or television program, channel, or newspaper reflects exactly the complainer’s worldview, it must be guilty of bias or corruption,” she said. “Intolerance of alternative viewpoints is spreading to places that make me, a moderate and a liberal, most uncomfortable.”

“Only last year, we saw a petition to ban Donald Trump from entering the U.K. It garnered half a million signatures,” Rowling said. Though the audience responded with applause, Rowling continued in earnest. “Just a moment: Now, I find almost everything that Mr. Trump says objectionable. I consider him offensive and bigoted. But he has my full support to come to my country and be offensive and bigoted there. His freedom to speak protects my freedom to call him a bigot.”

Rowling was recognized by PEN America with a Literary Service Award for her dedication to free speech and social justice. She was introduced by Sarah Jessica Parker, who lauded the themes of “honor, humility, dedication and resilience” in the Potter series.

Rowling concluded her remarks by calling for the release of Tal al-Mallouhi, a Syrian dissident who was imprisoned at age 18. Rowling quoted her writing, in which she issued a “plea for plurality, tolerance and the importance of rational discourse.”

Also honored on Monday was Michael Pietsch, the CEO of Hachette Book Group, celebrated for “his leadership in the fight against censorship.” In addition to editing authors ranging from James Patterson to David Foster Wallace, he led the charge against what many view as Amazon’s unfair pricing practices. Donna Tartt introduced Pietsch, who edited her bestseller and Pulitzer Prize-winner The Goldfinch, and described him as not only a good editor and publisher, but also “a good citizen in the larger republic of letters.”

In his remarks, Pietsch called on the book community to “be brave…and remember to publish wild voices, diverse voices, voices that make us uncomfortable.”

PEN’s Freedom of Expression Courage Award went to Dr. Mona Hanna-Attisha and Lee-Anne Walters, “for their civic expression to expose the water crisis in Flint, Mich.”

Walters played a key role in raising the alarm in Flint; as a mother of four, she saw her own family suffering from the effects of lead poisoning. After growing frustrated with the city’s disregard for her complaints, she contacted the EPA with details of the problem, prompting a series of revelatory investigations.

Hanna-Attisha, who was recently named to the TIME 100, is the director of the Pediatric Residency Program at Flint’s Hurley Medical Center. When she heard there might be something wrong with the water supply, she began researching increased lead exposure in the city’s children. When she saw that the rate of kids with high blood lead levels had doubled after the city’s water system switched to Flint River water, she held a groundbreaking press conference alerting the community to the problem.

Ahmed Naji, an Egyptian novelist serving a two-year prison sentence, was presented in absentia with the PEN/Barbery Freedom to Write award. Earlier this month, a letter signed by more than 120 writers, editors and artists—including Philip Roth, Chimamanda Ngozi Adichie, and Margaret Atwood—called on the Egyptian authorities to drop charges against Naji. He has been jailed for his fictional depictions of sex and drugs, “subjects so relevant to contemporary life that they are addressed through creative expression worldwide, and clearly fall within Egypt’s constitutional protections for artistic freedom,” the letter says. 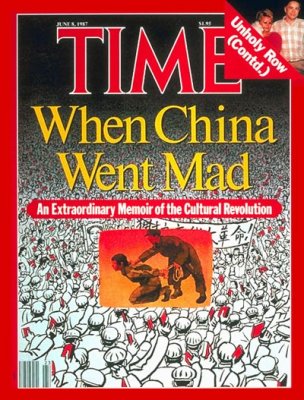 Read a Harrowing Memoir From China's Cultural Revolution
Next Up: Editor's Pick