Why Donald Trump's Surprising Wins in These Wealthy Suburbs Matter

Fairfield, Connecticut, doesn’t look like the Donald Trump country you’re used to seeing. The stately homes in Greenfield Hill, with its two-acre zoning requirement, and the charming waterfront in Southport, with sailboats docked in the calm waters of Long Island Sound don’t gibe with the raucous rallies thrown by the Republican frontrunner.

But these wealthy Connecticut suburbs are as much hotbeds of Trump support as some coal-mining counties in Kentucky.

Statewide, Trump won the April 26 primary with 58% of the vote, including all but three cities in Fairfield County, home to some of the richest communities in America and a place that many expected would go for a more moderate candidate like Ohio Gov. John Kasich, who has since dropped out.

“They normally go with an established, moderate candidate,” said James Millington, chairman of the Fairfield Republican Party. “But when the numbers came in on primary night, we saw something that we’ve never seen before.”

“We have a lot of corporate executives, highly educated people and very successful people in business, hedge funds and everything that make up our community in Fairfield, and people that I spoke to thought that they would probably break to Kasich,” he added. “And they clearly did not.”

Trump’s win in these communities likely won’t change much for the state, which hasn’t backed a Republican presidential candidate since 1988. Just days before the primary, his political director, Rick Wiley, told top Republicans that Trump could win in traditionally blue states such as Connecticut, Minnesota and Wisconsin in November, but it’s more likely that he’ll end up focusing his energy on swing states such as Ohio.

But his surprising wins in Fairfield are indicative of some broader trends shaping the fall elections.

For one thing, the popular image of Trump’s supporters as coming mainly from economically distressed areas is wrong. Supporters in Fairfield say that he’s doing well because of a message that cuts across economic lines.

“His tone and emphasis is one of strength. That grabbed people no matter their income level or other demographic characteristics,” said Greenwich Republican Town Committee Chairman Jim Campbell, who endorsed Trump in February.

Republicans in places like Fairfield and Greenwich are now looking in the rear-view mirror at the largely unexpected #TrumpTrain that swept through their towns. Some, like Michael Herley, a member of Fairfield’s local legislative body and a Trump supporter, think that he tapped into economic anxieties that even the well-to-do share.

“When you look at people who are in Fairfield like myself, it’s a pretty affluent area… [But] I think the people are very, very upset about the state of affairs in Connecticut,” he said.

Many Republicans in Connecticut feel they’re being crippled by taxes from the Democratic state government, and the ethos of manufacturing that once dominated the state is dying. General Electric announced in January that it is moving its corporate headquarters from Fairfield, its home since 1974, to Boston, Massachusetts, blaming in part a Connecticut budget deal that raised corporate taxes and “an inhospitable business climate,” according to the Wall Street Journal. GE was not Connecticut’s largest employer, but its move was a symbolic blow.

“They really hooked on to the moniker of restoring greatness back to a once-proud state,” Republican State Senator Tony Hwang said of Trump’s Connecticut supporters. “We were a state that had incredible manufacturing prowess. … [Connecticut] has been stuck in neutral and sliding down a hill, and he comes in and says ‘I’m going to make a change.'”

Another factor many cited was the weakness of both Kasich and Texas Sen. Ted Cruz by the time the Connecticut primary rolled around, which also shows the degree to which Trump has been able to consolidate Republican support.

“Cruz was nowhere to be seen and was not visible and had no presence. And then you had Governor Kasich who I strongly supported, but he was just too far behind,” said Hwang, who was Kasich’s state chair. “The opponents at that moment in time didn’t offer a compelling reason to run against the tide.”

In typical New England fashion, the tide was understated. Trump lawn signs and bumper stickers were scarce, even in the towns that voted overwhelmingly in support of him.

“People kind of kept to their own, but they were going to vote for him,” Hwang said.

“I found that the Wall Street professionals were quietly supporting Donald Trump while others were more vociferous,” added Campbell.

As Trump heads toward the Republican convention, some backers in the state think his support will become more visible.

“As I think more people began to feel comfortable acknowledging their public support for Donald Trump, I think you’re seeing more and more people gravitate toward him,” said Herley, the Trump supporter in the Fairfield legislature. “And then as those people gravitated towards him, for those who were noncommittal, it’s like being a New York Yankees fan. Everyone wants to be on the side of a winner.” 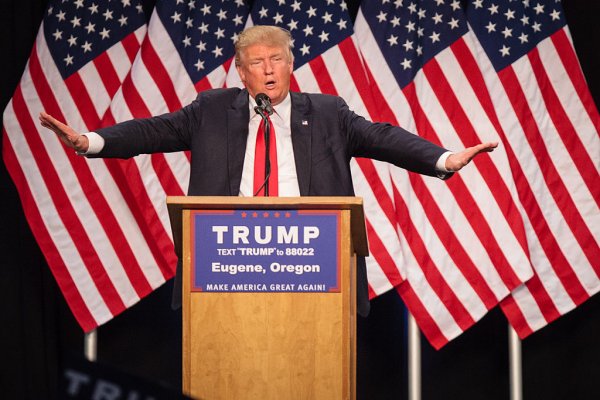 Aide: Trump Has 'No Reason' to Change
Next Up: Editor's Pick