Steven Spielberg, mostly to his credit but sometimes to his detriment, has an affinity for fantasy extravaganzas that aren’t wholly safe and cozy, pictures that come laced with a sense of menace. Occasionally, there’s a nasty misfire, like 1997’s too-sadistic The Lost World: Jurassic Park. Other examples of fantastical Spielbergiana like Minority Report and A.I. Artificial Intelligence are patchily imaginative but undone by excessive moralism. But with The BFG—which opens in July in the United States, and which is playing out of competition here in Cannes—Spielberg gets the tone just right. An adaptation of Roald Dahl’s 1982 children’s book about a giant—a Big Friendly one, that is—who befriends a little orphan girl, The BFG is a big picture, all right. This ambitious blend of live action and computer animation runs the risk of being overwhelming and sterile, but it turns out to be a pleasing and sweet-natured adventure thanks in large part to Spielberg’s big, friendly secret weapon: Mark Rylance, as the BFG himself.

All of Dahl’s work is marked by a pleasurable nastiness, as well as delight in disorderly behavior. Though Spielberg and screenwriter Melissa Mathison—with the permission of the author’s estate—have somewhat expanded and changed Dahl’s story, The BFG honors the author’s whimsical, waggishness impropriety. (This is the final screenplay from Mathison, the screenwriter of E.T.: The Extraterrestrial, who died in November 2015.) The heroine of the story is young Sophie (played by Ruby Barnhill, who’s spikily precocious without being overly cute), a London orphan whose intelligence and imagination are stoked by the books she loves to read. One night, Sophie is plucked from the orphanage by a giant hand and whisked away to a place she doesn’t realize. When she’s plunked into a frying pan, she fears she’ll soon become something, or someone’s, dinner. As it turns out, she’d been kidnaped, in a kindly sort of way, by a vegetarian giant who means no harm: This gangly, skyscraper-tall fellow, with knobby knees and elbows, and ears that flare out like sugarbowl handles, is the Big Friendly Giant (a computer-enhanced but instantly recognizable Rylance), and Sophie, after she overcomes her fear of him, shortens his name to BFG for convenience’s sake.

The BFG explains to Sophie that she’s now in Giant Country, though because he jumbles and mangles his words, and hasn’t had a lick of schooling, he pronounces “giant” like “joint.” (Even he acknowledges his mastery of the English language is “a bit crumply.”) Sophie learns all about his solitary life: He’s the smallest of the giants in Giant Country, and the others, gargantuan, booming individuals with terrible manners bully him incessantly. (Bill Hader and Jemaine Clement supply the voices for two of them.) They also insist on a diet of “human beans,” while the BFG subsists on bumpy, slimy, foul-smelling cucumberlike vegetable known as a snozzcumber.

The BFG is also a giant with a big job: He captures dreams and seals them in glass jars—where they glow in translucent, jellybean colors—before using a massive trumpet to blow them into the minds of humans as they sleep. Sophie accompanies the BFG on his dream-catching rounds, where she witnesses the other giants’ mistreatment of him. She hatches a plan to stop them from harassing the BFG, and to end their diet of human protein, by enlisting the help of the Queen (Penelope Wilton).

It’s sensibly ridiculous, as solutions go, and Spielberg takes clear pleasure in it: The sequence in which the BFG visits Buckingham Palace and introduces the queen—not to mention her corgis—to his favorite drink, a fizzy, flatulence-inducing libation called frobscottle, is joyously chaotic without being overwhelming. For such a big, extravagant movie, with such an outsized central character, The BFG is surprisingly intimate, and that’s largely thanks to Rylance: His BFG is a fragile, gentle soul with clumsy feet clad in hippie-sandals, a bit frightening at first, but he wins us over in a heartbeat. His higglety-pigglety cadences and incessant malapropisms—“butterflies” become “buttery-flies,” for example—come to sound like music, and his eyes are sad and warm and exuberant at once. He’s a giant too big for the world and yet fully alive to it. At one point he reads Sophie to sleep with a snippet from her copy of Nicholas Nickleby, holding the tiny book in his hands as if it were a grand, miniature treasure. He needs a magnifying glass to see the minuscule type, but as he reads aloud, the words come out in great, rolling waves. Even for giants, God is in the details. 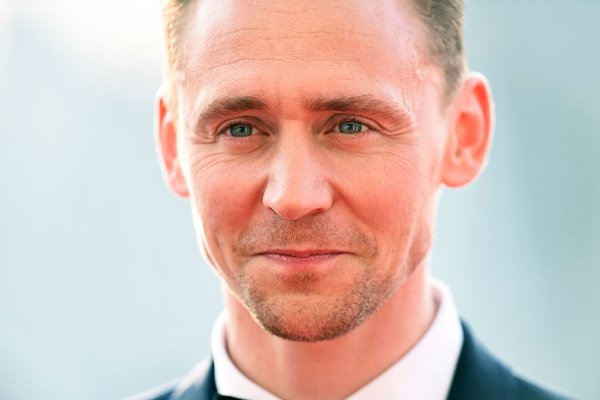 Bookmaker Suspends Betting on Tom Hiddleston to Be Next James Bond
Next Up: Editor's Pick