Review: The New 'Doom' Serves Up a Brew of Nostalgia and Carnage

There are no safe spaces in Doom. The demons on Mars—and that’s all you need know, that there are demons on Mars—will chase you everywhere. Down slag-lit corridors full of strobing klaxons and dread. Up cliffs and through gore-shellacked crucibles of pain. To anywhere you’ve deemed a bulwark, because in id Software’s gonzo shooter (out May 13 for PC, PlayStation 4 and Xbox One) nowhere is.

Your instinct may be to dawdle. To linger over the arcane symbols etched in slabs of stone. To peruse the fine-print littering random computers screens and signage. To find meaning in the orchestration of colored keys that open whooshing doors that lead to scrums of howling minions.

This is precisely how not to play Doom—reflexive thinking drilled into our heads by contemporary design assumptions. Like tapping a button to reload a gun. Or clicking another to sprint. Or trying to duck behind cover. All contemporary shooter tropes of as much interest to this jubilantly lunatic version of Doom as savoir faire to the current political season.

Forget aspirations to hero-hood, too. You’re the sort of especially cruel uber-soldier who punches harmless service drones after using them for upgrades because punching feels good. Duke Nukem would crack wise to lighten the mood, but Doom‘s mute space marine just soldiers on like a stewing, steroidal super-villain in a game that’s absurdly violent and violently absurd.

Remember when Doom 3 tried to mean something over a decade ago? When its sci-fi/horror story about portals to hell on Mars and platoons of demons took itself seriously? When the franchise’s stewards got someone to write tie-in novels hundreds of pages long?

This is the opposite: A gleefully gory ballet in a nightmare fun park. It’s run-and-gunnery for fans of slaughterhouse shows like Ash vs. Evil Dead, who say “Oooooooo” when body parts fly, but with half a smile. Before you’ve crossed the finish line, you’ll pry apart skulls like rotten grapefruit, kick open ribcages, disembowel enemies thrice your size and spray their viscera around like Gallagher’s psychopathic alter ego. It’s emblematic of writer Michael Arnzen‘s point about splatter movies: “The spectacle of violence replaces any pretensions to narrative structure, because gore is the only part of the film that is reliably consistent.” Now extend that point to gameplay built lovingly on the shoulders of the 1993 original’s simple, frenetic triumphs.

What a pleasure it is not to have to reload weapons, or to glide over health and armor pickups without pausing to press buttons, or to whip through levels so straightforward they’re basically slides from one bloodbath to the next. There’s no sprint toggle because you’re always sprinting. Instead of ducking behind cover you’re trying to get out from behind it to lay hands on your next victim. The squelching sounds of pulverized anatomies punctuate a susurrus of Chthonic roars and growls as you shoot then “glory kill” enemies by literally tearing their head and limbs off.

All of which works until the campaign runs out of cleverly refurbished ideas and starts repeating itself. Whether on Mars or in hell, the auto-maps betray level design that’s largely homogenous. You’re either prowling synthetic or cavernous corridors that link up with micro-arenas, where franchise enemies spawn in reliable sequence along a lethality curve. A few of these are nimbler and smarter, scurrying up the sides of columns to fling fireballs from on high, flee when charged, or chase you down. But all of this gang Doom vets have seen, and it’s a letdown that right up to the finale, they mostly look and behave as they did decades ago.

Still, there’s something undeniably cathartic about gliding along ramps that feel like racetrack curves, mantling and vaulting between platforms while dispatching bad guys with the panache of a boss. It’s a shift from the cautious to the cavalier, a reminder that hot-rodding around blood-lacquered playgrounds with the sang-froid of a sociopath hasn’t worn out its welcome.

And after awhile you’ll find you can slow down enough to probe for the odd puzzle, which—as in the 1993 original—amounts to sleuthing for hidden nooks that harbor items which improve your arsenal. Doom has a roleplaying veneer that lets you refine health, armor, ammo and weaponry just enough to warrant detours to turn up each level’s handful of hidden improvements. That some of these can then be bolstered by performing a certain move so many times, or hitting an arbitrary kill threshold in completely un-Doom-like ways, is just the part where modern design’s been sensibly folded in.

If you’d rather do that stuff to other players, there’s a robust multiplayer mode walled off from the campaign that serves up classic, durable match types. These range from rote team-based shootouts to comic variants, like a mode in which you’re trying to freeze enemies while thawing frozen teammates. If you’re a budding level designer, the new “Snapmap” level editing mode adds bottomless value to the game, with an eponymous Lego-like approach to slapping level pieces together. (Thankfully, it’s as usable on consoles as PCs.)

The other thing I’m not sure about is Doom‘s “codex,” a vast library of discoverable text entries that delve into the narrative whys and wherefores. It feels at odds with everything else, like an encyclopedia cataloguing different reasons for chewing bubblegum. If you’re going to commit, then commit. Did the original 1993 Doom have a story? Did anyone care?

You can ignore that stuff, of course. I’d argue you should, because this is about the opposite of stopping to read, or think, or reflect. Bring on the crazier crazies, the cacodemons, the cyber-horrors, the spider-legged brains. Bring on the punching of things in the face until faces pop off. Then pity these busy monsters, because for all their snarling swagger, this is an abattoir, and you its blithe, maniacal, chainsaw-wielding butcher. 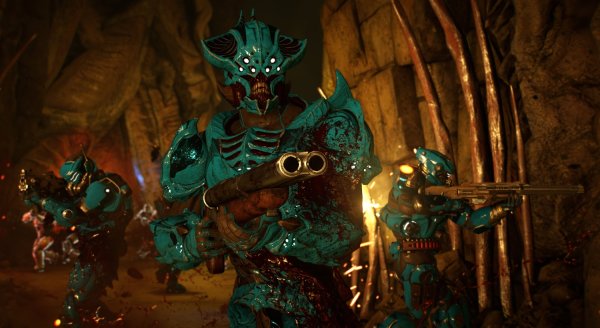 Doom Is a Gleefully Gory Ballet Set in a Nightmare
Next Up: Editor's Pick