Burma's Logging Ban Is Great for Forests, but a Disaster for Its Working Elephants

Modern Burmese history was built on teak, which is to say it was built on the backs of elephants. The British quickly saw teak’s potential after colonizing Burma in 1824, and realized that hitching an elephant to a two-ton log was the only way of getting timber from where it was felled to the nearest waterway, and floating it to mill and market.

It was arduous work, with malaria and anthrax decimating man and behemoth. But fortunes were made and the timber helped shape the world map by being the stuff from which the British imperial fleet was fashioned. Teak remained vital after Burma’s independence in 1948. It was the second highest source of legal foreign exchange and exports for the military dictatorship, earning the junta hundreds of millions of dollars a year.

Last year, in the land that is now officially known as Myanmar, total timber exports surpassed 1.24 million cubic tons and generated more than $1 billion in revenue, of which teak alone earned $359 million. From Tuesday, however, the new quasi-democratic government is banning the export of round logs and slashing its total logging quotas. The plan is to stimulate a domestic milling and carpentry industry and protect already plundered forest, which plummeted from 58% of total land in 1990 to 47% in 2010, according to government figures.

But while applauded in many environmental quarters, this move will likely spell disaster for the more than 5,000 elephants and their oosi, or handlers, who rely on this trade. Sixty percent of Burma’s timber industry still depends on elephants — not only for their tremendous strength but for their ability to haul huge logs with minimal damage to the surrounding forest.

After some 25 years backbreaking toil, “some have health problems — cardiac problems or eye problems — and we decide they are not suitable to work any longer,” she tells TIME. The government has camps for retired elephants, but “they don’t have enough resources” and need to “give more supplementary treatments” for elephants that fall ill.

In the wake of the April 1 logging ban, and with nowhere else to go, many timber elephants may be released into the wild, but “because of deforestation there are not enough habitats for them,” the campaigner adds. Competition for land and food will likely bring them into conflict with humans; in India, parallel pressures see up to 300 people killed each year from marauding elephants.

If not set free, elephants risk being slaughtered for their precious ivory or hides. Many could also be smuggled across the border to Thailand and put to work in the tourism industry, where animal abuse is rife. Still others could used in Burma’s illegal timber trade, which in fact accounts for the great majority of the business.

According to report released last week by a green nonprofit, the Environmental Investigation Agency, nearly three-quarters of all Burmese logs were smuggled across the border through illicit export deals between 2000 and 2013. (Most of these were harvested from inferior or juvenile trees, however — the best timber is sold through legitimate dealers in Rangoon.) “Sometimes there are a thousand trucks each day going into China with teak, and years ago it was even more than that,” says Bob Steber, managing director of Singapore-based Ginnacle Import Export, who has dealt in teak for more than four decades.

The fear is that banning legal Burmese timber exports will cause this unregulated sector to grow even more. Plantation teak now exists as far afield as Indonesia, Africa and the Caribbean, but typically grows quickly due to overly wet climates, and so is comparatively soft and liable to crack. The best Burmese teak, by contrast, is richer in natural oils and dries out for around eight or nine months of the year, sometimes taking up to 20 years for one inch of growth. “For the real good teak there’s only one thing, and that’s the Burma teak,” says Steber.

While plantation teak is adequate for garden furniture, picture frames and assorted curios, natural teak is essential for luxury yachts, as the oils repel water and keeps the wood from cracking. “And teak has silica — sand — in it so you don’t slip and fall when its wet,” says Steber. “It really is amazing.”

Burma is estimated to have half of all the world’s natural teak, and is the only country where it can still be felled. Last year, nearly 400,000 cu m of teak were felled and exported — three quarters of global supply — but the proposed cut in quotas for 2014 means that just 80,000 cu m will be felled across all grades this year. “There is no doubt the prices will rise dramatically but total supply is still very much in doubt,” says Shannon Rogers, of Philadelphia timber company J. Gibson McIlvain.

So is the future of Burma’s elephants, upon which so much of the country’s wealth has been founded. 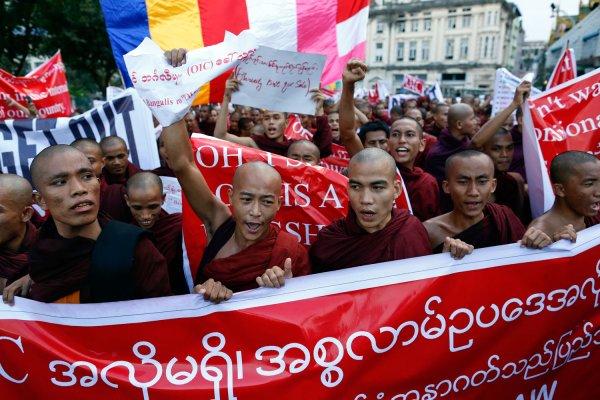 Burma Mulls Curbs on Muslims
Next Up: Editor's Pick