In 1957, the “Little Rock Nine” were on the front lines of the fight for school integration in Arkansas following the landmark Brown v. Board of Education ruling. As the first black students to attend Little Rock’s Central High School, they became national symbols of the question of who belongs where. On Friday, one of the women who was part of that group told TIME that North Carolina’s law banning transgender people from certain bathrooms is “three steps backward” in the same debate.

When U.S. Attorney General Loretta Lynch announced on Monday that the federal government would sue North Carolina over that law, she called it part of the history of “discriminatory responses to historic moments of progress for our nation”—just like the “fierce and widespread resistance to Brown v. Board of Education.” The parallel was, in some ways, literal: the prospect of black students and white students sharing bathrooms was one of the most fraught elements of the Little Rock integration. As the scholar Phoebe Godfrey has shown, a fear of integration led some white students to get doctor’s notes to avoid having to take showers after P.E.

Carlotta Walls LaNier knows that history firsthand, and to her that comparison seems fair. As a teenager, she was one of those nine. Now 73, LaNier said the North Carolina state law known as HB2 is a threat to civil rights—and it bothers her that people are still debating the same issues.

“We made progress, and then there are people who want to take two and three steps backward,” she told TIME on Friday. “History wants to continue to repeat itself.”

LaNier said she agrees with President Barack Obama, whose administration told public schools on Friday that they have to allow transgender students to use bathrooms matching their gender identity.

“When are we going to move into the 21st century?” she said, drawing a comparison between the U.S. and parts of Europe that have gender-neutral bathrooms. “Here we are still digging a deeper hole when it comes down to equal rights for people.”

LaNier said the battle over shared public facilities is familiar to her.

MORE: See LIFE Photographs of the Little Rock Nine in 1957

“I grew up in a Jim Crow environment where you had one sign that said, ‘Colored’ and one said ‘White,'” she said. “Here we are looking at some of the same situations…To me, it’s just going backwards.”

LaNier said she thinks the U.S. needs to be more forward-thinking, and she praised LGBT groups and activists for fighting discrimination.

“I think that they should demand their rights. Fortunately a great number of them are speaking up—and as they do that, they will find that there is support out there,” she said. “They have a place in this country, too.” 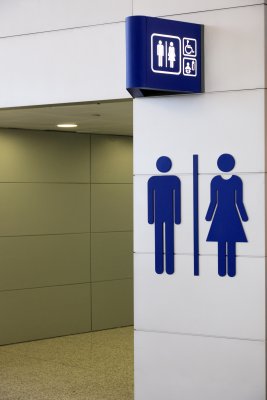