US Republican presidential candidate Donald Trump addresses the audience in Eugene, Oregon on May 6, 2016
Rob Kerr—AFP/Getty Images
By Daniel White

Donald Trump on Friday denied a report that he has “masqueraded himself” as his own spokesperson in the past, using fake names.

In one particular 1991 phone conversation, the Washington Post obtained audio of Sue Carswell, a reporter at People, speaking to a Trump publicist named “John Miller.” Miller, the Post reports, is actually Trump.

In the call, Miller sings Trump’s praises, speaking about “Donald’s” business endeavors and love life. The Post also details additional instances of the billionaire allegedly using pseudonyms to represent himself in the press.

The Republican presidential candidate was quick to deny the allegations when confronted about the report on NBC’s Today show.

“No, I don’t think it — I don’t know anything about it. You’re telling me about it for the first time and it doesn’t sound like my voice at all,” he told Today‘s Matt Lauer and Savannah Guthrie. “I have many, many people that are trying to imitate my voice and then you can imagine that, and this sounds like one of the scams, one of the many scams — doesn’t sound like me.”

When pressed further, Trump stopped the conversation in full. “When was this, 25 years ago? Wow, you’re going so low as to talk about something that took place 25 years ago about whether or not I made a phone call…The answer is no, and let’s get on to more current subjects…I know it’s wonderful for your listeners, but I think we have more important things to discuss.”

According to the Post, Trump testified during a 1990 court case that he had used “John Barron” as a pseudonym in the past. “I believe on occasion I used that name,” Trump testified at the time, the paper reports. 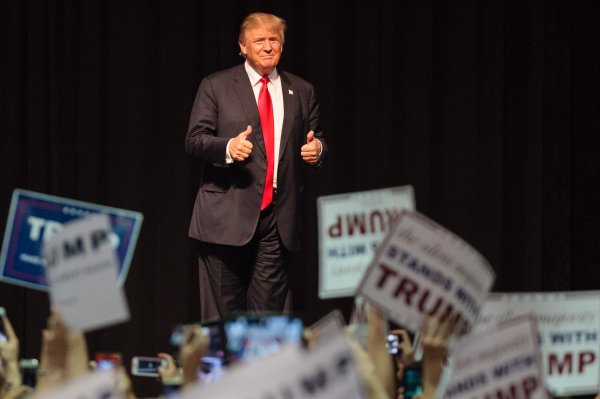 Donald Trump: Amazon 'Getting Away With Murder' on Taxes
Next Up: Editor's Pick