People stage a protest against Donald Trump after he made comments stating that he wants a 'total and complete shutdown of Muslims entering the United States' in front of the Trump Tower at 5th Avenue in New York City on Dec. 20, 2015.
Cem Ozdel—Anadolu Agency/Getty Images
Ideas
By Alyssa Sims

When asked about his statements regarding the proposed temporary ban on Muslim visas in a phone interview with Fox News, Trump said: “I’m thinking about setting up a commission, perhaps headed by Rudy Giuliani, to take a very serious look at this problem. But this is a worldwide problem. And we have to be smart.”

Trump first proposed temporarily barring Muslims from the United States in a public statement last fall, calling for a ban until government leaders can “figure out what is going on.” After last year’s Paris attacks, Trump also suggested a mandatory registry of American Muslims.

This latest measure to counter violent extremism raises many practical questions: Will this commission exist alongside similar anti-terrorism efforts that already exist throughout the country? Who, exactly, would pay for this initiative? Most important, does the terror threat to the U.S. posed by Islamic extremists necessitate such a move? And, if not, why would Trump propose such a thing?

According to data collected by New America, a D.C.-based think-tank for which I am a policy analyst, no such commission is necessary or useful.

American citizens and residents conducting terror plots within U.S. borders remain a greater issue than the potential threat of jihadi groups including ISIS and al-Qaeda.

The San Bernardino shooting in 2015 and the Fort Hood shooting in 2009—two of the most deadly attacks since 9/11, which killed 14 and 13 people, respectively—were orchestrated by citizens born in the U.S. In the case of San Bernardino, where Syed Rizwan Farook, an American citizen born in the U.S., and his wife Tashfeen Malik, who entered on a K-1 visa, the couple’s links to foreign terrorists were not substantial, and did not raise red flags among law enforcement prior to the attack. A commission on foreign-born Muslims, then, would not have been relevant.

Trump’s proposal ignores a larger issue. A “radical Islam” commission dismisses tragedies such as the Colorado Planned Parenthood shooting and the Charleston Church shooting, both which took place in 2015 and were carried out by individuals motivated by ideologies that are non-jihadist in character—specifically Christian conservatism and white supremacy.

While Trump’s policy proposals up to this point have been mostly concerned with countering a specific brand of terrorism motivated by jihadi Islam, the ideological threat to the U.S. is more diverse than many Americans appreciate. Since 2001, right wing extremists have claimed more victims in terror attacks than jihadists. Perhaps Trump also has a “radical right-wing extremist commission” in mind to address this security threat?

More likely Trump’s suggested program would do more to hurt national security than to strengthen it. Creating an anti-terrorism program specifically targeting “radical Islam” perpetuates an on-going narrative that the U.S. is at war with Islam, a religion practiced by more than a billion Muslims around the world.

This narrative is not helpful to the strength and security of the U.S. Language regarding this perceived campaign against Islam has been used by jihadi thought-leaders throughout history such as Islamic theorist Sayyid Qutb, American imam Anwar al-Awlaki and former al-Qaeda commander Osama bin Laden as a recruitment tool to sympathize otherwise peaceful Muslims to their violent cause.

The debate on whether to label extremism, radicalism or terrorism as “Islamic” is a mostly partisan one. President Barack Obama has come under fire many times by Republicans for abstaining from labeling violent extremism by theology—a strategic choice meant to discourage Islamophobia and stem ISIS recruitment, and one that seems not unfair considering the terror network’s slick propaganda videos that frequently call on Muslim youth to carry-out jihad against America crusaders who are at war against Muslims. The group’s unprecedented recruitment numbers are a testament to the success of the narrative put forth by Trump.

Trump’s incendiary statements are unprecedented for a leading presidential candidate at this stage in the race, and his proposal of “radical Islam commission” is just another example of his unfamiliarity with the nation’s primary national-security threats. Anti-Islamic policy proposals are a distraction from legitimate threats and are likely to do more harm than good. 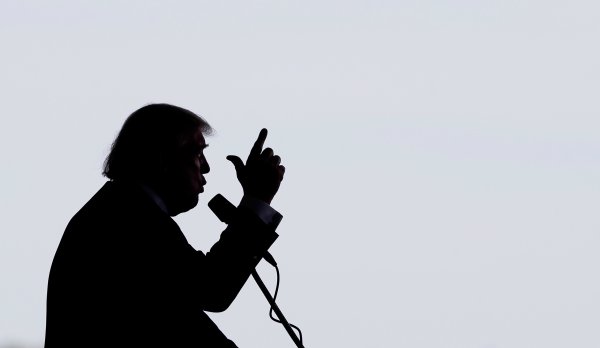 The ‘Bombshells' That Could Be in Trump’s Taxes
Next Up: Editor's Pick