A set is created in Malin Head, Co Donegal Ireland, as filming for the next Star Wars movie will take place there, May 12, 2016.
Niall Carson—PA Wire/Press Association Images/AP
By Ciaran Byrne/Malin Head,Ireland

It could be the Millennium Falcon or it could be a Jedi temple, but the residents of Malin Head in the most northerly part of Ireland have never seen anything like it. Some residents may know what set designers from Lucasfilm are building on a remote clifftop for filming scenes of Star Wars Episode VIII next week, but they have signed confidentiality agreements and no one is inclined to break them.

“Some of the biggest talkers in this village are up there working on Star Wars, yet they cannot say a word about it because they have signed confidentiality agreements. It’s driving them mad.”

So says Hugh Farren, as he pours a coffee in his pub in the Atlantic fishing village of Malin, five miles from Malin Head in County Donegal, the most northerly point on the island of Ireland. Outside, on the wall of his bar, is a freshly-painted mural of ‘Yoda’, an iconic character in the multi-billion dollar Lucasfilm franchise, which is about to film parts of the as yet untitled Star Wars film in north-western Ireland. Inside, a sign says: “Use of the Force is strictly forbidden on these premises.”

Ireland's most Northerly bar, Farrens, is seen with mural art of Star Wars character Yoda at Malin Head in Ireland on May 11, 2016.
Clodagh Kilcoyne—Reuters

The security and secrecy surrounding the filming clearly does not apply to Farren and for days he has been welcoming an Imperial-sized army of visitors and curious onlookers from all corners of Ireland and beyond. They pop into the pub with one objective; to ask Hugh and his customers what they know about the filming of Star Wars, to pick up any useful tittle-tattle and to record any sightings of absolutely anyone remotely resembling a Hollywood celebrity.

Pleased with his mural and a prolonged spell of warm weather, he admits that a kind of intergalactic madness has infected life in this rugged, sparsely-populated peninsula.

This weekend will see the almost total shutdown of Malin Head as filming of key scenes begins in the latest Star Wars production, overseen by director Rian Johnson. With roads in closed and security tight, locals are set for a lockdown. Additional security measures are reported to include a Wi-Fi blocker to prevent drones being flown above the set and no-fly zone imposed by Ireland’s aviation authority.

Those sworn to secrecy include all of the people from Malin and the nearby town of Carndonagh who are providing the holiday homes, hotels, guest houses, vehicles, meals and coffees needed to house and feed an army of film crew and security guards over an estimated three-week filming and production period.

A set is created in Malin Head, Co Donegal Ireland, as filming for the next Star Wars movie will take place there, May 12, 2016.
Niall Carson—PA Wire/Press Association Images/AP

Malin and the rest of Inishowen did not share in the spoils of Ireland’s boom years, and in the teeth of Ireland’s savage economic crash, the area suffered more than most with high levels of unemployment and emigration. Before that, proximity to Northern Ireland’s ‘Troubles’ blunted its efforts to develop tourism.

A silver lining is Inishowen’s seemingly limitless, breathtaking beauty; it is one of the last undiscovered parts of Ireland – and Europe – and that’s a prime reason why the big-spending movie makers are here, bringing with them hundreds of thousands of precious euros for the local economy.

“The movie will open up Inishowen and Malin to the world,” says Niall McLaughlin who runs the Pure Savage textile company in Carndonagh. As he presses a new t-shirt in his little studio he laughs and holds up the garment bearing a print of Darth Vader’s face. “Donegal – it’s a bit different,” says the slogan.

It will soon be available to buy online as canny locals like McLaughlin figure out novel ways of harnessing the power of Hollywood for local gain.

Up on Malin Head itself, Star Wars fever is in full swing as visitors and media look for spots to sneak a peek at the unfolding Star Wars production and its associated roadshow. Some locals have even posed in stormtrooper uniforms.

JJ McGettigan from the Emerald Garrison, a star Wars costuming club, in Farrens Bar in Malin Head, Co Donegal Ireland, as filming for the next Star Wars movie will take place there, May 12, 2016.
Niall Carson—PA Wire/Press Association Images/AP

To reach Malin Head, you must drive along a narrow, winding road, past the Irish Meteorological Service’s most northerly monitoring station and up to a beautifully elevated site known as Bamba’s Crown, the jewel of Malin Head.

Named after a mythical goddess and queen of Ireland, the name adds to the mystique of this location which hosts a Napoleonic-era lookout tower, built by the British in 1805. The panoramic views at 500 metres are simply stunning. Bamba’s Crown is a popular spot for frequent sightings of Aurora Borealis, the Northern Lights, and was once the site of a transatlantic telegraph station.

Despite the history, the views and 200,000 plus visitors a year, the spot has been neglected and there are no facilities for visitors. “‘Star Wars may change that,” says Martina Quirke, who sells local crafts and Darth Vader fridge magnets from a pop-up Wild Atlantic Gifts shop at Bamba’s Crown.

The security operation for the movie project in Malin is substantial, with dozens of walkie-talkie wielding guards manning approach roads and junctions, protecting film unit encampments and eyeing up anyone with a camera. The mission is to maintain a complete publicity and media blackout and covers almost everyone associated with the film’s production, no matter how minor or
seemingly innocuous their role.

Despite their best efforts, the dogged have been rewarded with long-lens sightings of what looks like a replica of the space ship ‘Millennium Falcon’ clinging to the side of a Malin Head cliff known as ‘Hell’s Hole’.

This week, Land Rovers, people carriers and limousines with blacked out windows swept through Malin village, all headed for the Star Wars base camp. “Is that Luke Skywalker?” shrieked a teenage girl as a group of people outside Boggs Butchers stood and waved. The drivers waved back. They were followed by a vast fleet of heavy trucks with the branding of G+H Television and Film Services, a specialised movie production company, carrying props and electrical equipment.

Some of those working at Malin spoke on condition of anonymity including a worker for Pulse Security, a firm drafted in from Dublin, almost 200 miles away. One worker told how security guards are being stationed in farmers’ fields with only sheep for company, to stop photographers sneaking up to the set. “They have to sit in a field all day with a pair of binoculars and a radio and report on
any movements. It’s boring but reasonably well paid,” he says.

Sean Murray drove from Creeslough in Donegal to Malin Head with his mother, Maggie, to soak up the atmosphere and excitement of the nearby filming. He certainly had impressive credentials.
The 21-year- old-student and self-confessed ‘Star Wars nut’ lifted his top to reveal a chest tattoo that symbolises ‘The Force’, complete with a green light sabre. “Oh man, I hope they’re building a Jedi Temple down there,” he said, pointing towards a distant crane perched above the Hell’s Hole site. “I can’t believe that when this movie comes out, little old Donegal and Malin Head will be in it. It’s just unreal.”

At the other end of Ireland, locals in the south-western county of Kerry are still weighing up the benefits of the Star War’ dividend. Director JJ Abrams chose the island of Skellig Michael, a UNESCO World Heritage Site, as the location for the scenes in Star Wars Episode VII: The Force Awakens when Luke Skywalker is located.

Back in Malin Head, there are no qualms about the use of the site for such a stellar project. Donegal County Council set up a dedicated film office 13 years ago, to encourage movie making. That decision has had a spectacular pay-off though the film office refuses to comment about its dealings with Lucasfilm, which is owned by Disney.

The Malin Head Community Association hope that Star Wars will leave a lasting legacy. Politician Charlie McConalogue, who represents Inishowen in Ireland’s national parliament, agrees. “We’ll have to see just how much of the filming actually makes it into the movie but it will help showcase the landscape and what Donegal has to offer. People are rightly excited because there have been tough times. They’ve had enough of the dark side.” 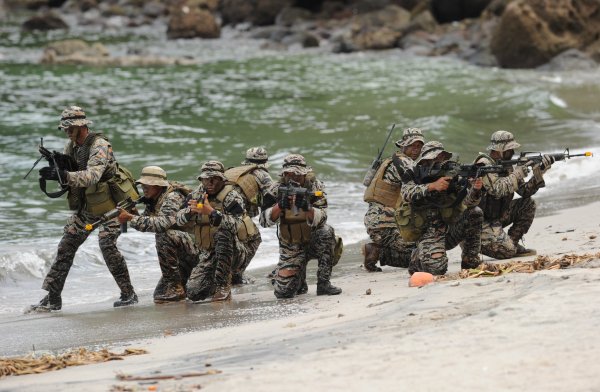 Sun, Sea and ISIS: Insurgency in the Southern Philippines
Next Up: Editor's Pick