Museveni called the court “a bunch of useless people” during his welcoming remarks as he was sworn in for a fifth term, extending his rule to 35 years, Reuters reports.

Among those in attendance was Sudanese President Omar Hassan al-Bashir, who is wanted by the ICC on charges of genocide, war crimes and crimes against humanity committed in Darfur between 2003 and 2008. Al-Bashir denies the court’s authority and has flouted arrest warrants in the past when he traveled to South Africa last year.

“In response to President Bashir’s presence and President Museveni’s remarks,” U.S. State Department spokesperson Elizabeth Trudeau said at a Thursday press briefing, “the U.S. delegation, along with representatives of the E.U. countries and Canada, departed the inauguration ceremonies to demonstrate our objection.”

But al-Bashir’s presence was not the only controversy surrounding Thursday’s inauguration. Ugandan opposition leaders have said Museveni’s re-election campaign was marred by fraud and intimidation. And the U.S. said the election was “deeply inconsistent with international standards and expectations for any democratic process,” noting in particular the arrest of main opposition candidate Kizza Besigye. 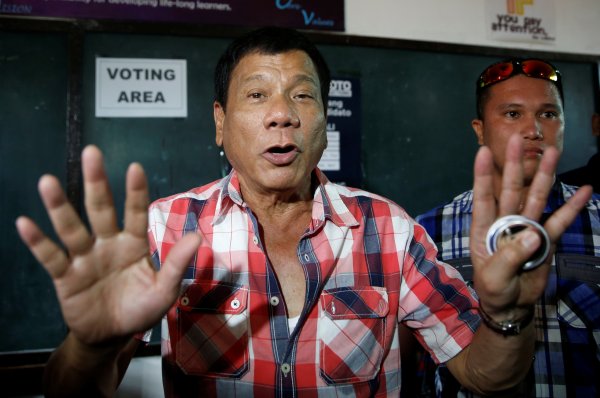 Rodrigo Duterte Sorry for Calling Pope 'Son of a Whore'
Next Up: Editor's Pick