Hillary Clinton speaks during a rally on May 11, 2016, in Blackwood, N.J.
Kena Betancur—AFP/Getty Images
By Zeke J Miller and Philip Elliott / New York

Donald Trump lurches in unexpected but effective ways. As a businessman, his unpredictability left rivals scratching their heads, and checking their wallets. After 11 months of mounting campaign-trail success in the face of more than $100 million in negative advertising, a hostile GOP Establishment and a skeptical media, those same tactics have Hillary Clinton’s supporters wondering what, exactly, can work against his kind of political insurgency.

Now some opponents in both parties have concluded that Trump represents a kind of political asymmetric threat: less equipped, unpredictable and remarkably resilient. And as others have learned in the worlds of business, technology and national security, it takes a different kind of strategy to defeat that kind of unpredictable disrupter.

“There is definitely an asymmetric political battle here,” says Tim Miller, Jeb Bush’s former communications director and an adviser to the #NeverTrump super PAC Our Principles Project. “He’s not playing by the same rules and it’s limiting.”

To be sure, Trump has provided Clinton with a bounty of potential attacks: his statements about Mexican immigrants, his comments about women and his routine shifts on policy will all be fodder in the months to come. But Trump’s opponents in the Republican primary were unable to make headway with similar material.

Florida Senator Marco Rubio made fun of the size of Trump’s hands, only to be criticized for being distasteful. Retired neurosurgeon Ben Carson tried to ignore him, refusing to engage even when Trump compared him to a child molester. He’s now working for the Trump campaign. Texas Senator Ted Cruz held off criticizing Trump for months and ended up looking desperate when he started. Former Hewlett-Packard CEO Carly Fiorina, the lone Republican woman in the race, scored a direct hit on Trump’s remarks on women, but it didn’t help her in the polls. And former Florida governor Jeb Bush pitched himself as the policy-focused adult in the race only to be trounced.

Taken together, the GOP has provided Clinton a playbook of things not to do: don’t stoop to Trump’s level, don’t ignore him until it’s too late, don’t merely call him sexist, don’t trust in policy above personality.

“Trump seems like a boorish insult comic, but he is actually incredibly disciplined about driving a single specific contrast narrative: Cruz is dishonest, Jeb is weak, Rubio isn’t up to the job,” says Dan Pfeiffer, a former senior adviser and message maven to President Obama. “The Clinton campaign and larger Democratic infrastructure needs to settle on a similar narrative and hammer it as relentlessly.”

Hillary Clinton has so far resisted the urge to jump into the fray. When Trump charged that she “enabled” Bill Clinton’s infidelity, she let the line slide and instead pivoted to hammer him for refusing so far to release his tax records. “When you run for President, especially when you become the nominee, that is kind of expected. My husband and I have released 33 years of tax returns,” Clinton told a crowd in Blackwood, N.J. “We’ve got eight years on our website right now. So you have got to ask yourself: Why doesn’t he want to release them? Yeah, well, we’re going to find out.”

In traditional campaigns, communications teams develop message plans and calendars to systematically relate their agenda to voters — and to sync up with advertising buttressing the themes. But running against Trump there is no “jobs week.” Rather, every day threatens to be dominated by whatever new insult or attack the former reality-television star dreams up. “A constantly reacting campaign is a losing one,” one Clinton ally says. “If you’re responding knee jerk, you’re going to need knee-replacement surgery by November.”

Clinton’s advisers are keeping their heads down and continuing with a plan that pitches Clinton as the sober, qualified candidate with concrete — if wonkish — proposals to address specific problems. They know it’s not in Clinton DNA to out-Trump her fellow New Yorker, and that she will never be the draw that Trump is for his raucous rallies. Instead, they’re leaving most of the attack work to surrogates — numerous and dispensable — and urging Clinton herself to keep focused on what she’s good at: policy.

The overarching question this November will be whether voters want a political professional, or a newcomer whose ego matches the nation’s mood.

“Hillary is not good at the witty remark. She’s not good at the charming attack,” Miller says. “That’s not her strength. But she will be able to passionately attack him on issues her supporters care about. Her campaign is going to have to find ways to keep those issues in the news and not the others that Trump brings up.”

One strategy that Clinton may end up using a lot is letting Trump speak for himself. On Cinco de Mayo, the real estate mogul tweeted a photo of himself eating a taco salad, saying that he loves “Hispanics” (the holiday is actually of Mexican origin) and bragging about the grill at the Trump Tower. Clinton responded with a tweet that contrasted his taco salad with a statement he made just a day earlier: “They’re gonna be deported.” More than 6,000 people retweeted her.

It’s one of the lessons that people in business and the military learned long ago. If you want to defeat a disruptor, you have to become more like them. 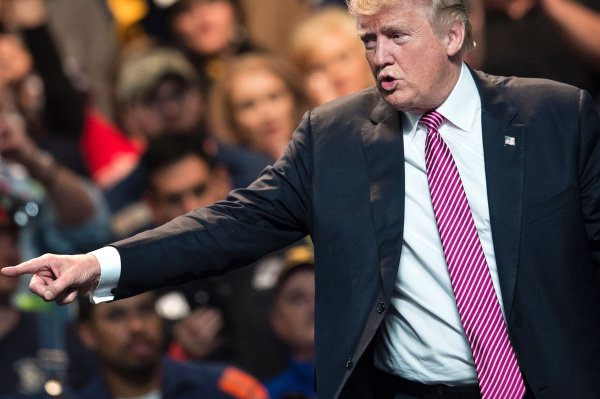