It would be easy to dismiss an hour-long film adaptation of Peter Schweizer’s book about the charitable-political-nonprofit complex of Bill and Hillary Clinton as nothing more than conservative propaganda. But sitting in a Manhattan screening room late Wednesday, it quickly became clear that conservatives weren’t the intended audience for Clinton Cash.

Environmentalists. Anti-nuke activists. Gay-rights advocates. Good-government folks. They’re all going to find themselves increasingly uncomfortable over claims that the likely Democratic nominee, in the film’s words, takes cash from the “darkest, worst corners of the world.”

The 60-minute indictment of the Clintons will soon find its way to an awful lot of televisions ahead of November’s elections. Based on a heavily researched book by the same name, Clinton Cash is careful in laying out a series of facts that are mostly true, though both the book and the movie sometimes draws connections and conclusions that aren’t as solid as their evidence.

“When it comes to the Clintons, you have to follow the money,” Schweizer says in a rough-cut previewed for TIME.

No doubt, there are many places where dotted lines are smudged into solid ones, and some assumptions are made where concrete evidence of quid pro quo is impossible to prove. But as a work of persuasion, the movie is likely to leave on-the-fence Clinton supporters who see it feeling more unsure about casting a vote for her. Made by the conservative Breitbart News’ executive chairman, Stephen K. Bannon, and director M.A. Taylor, this film rises above the traditional campaign hit job.

“This film is not to re-litigate Benghazi or the 1990s,” Bannon said.

The 1990s were, in fact, dealt with during Clinton’s last campaign. Hillary: The Movie was broad and provocative, dealing with the various scandals during Bill Clinton’s presidency. That movie had little influence on the 2008 campaign, but it ended up becoming inadvertently influential when a case about it led the Supreme Court to overturn campaign finance restrictions in the Citizens United case, ushering in the era of super PACs.

Unlike Hillary, Clinton Cash is a more narrowly focused production with a clear-cut thesis that it repeats through a litany of perceived shifty associations. One alleges that that the Clintons helped the Russian nuke agency get control of 20% of American uranium as part of a deal that involves a Canadian billionaire, Kazakhstan mining officials and Vladimir Putin. Another claims that the Clintons got into bed with African strongmen with horrendous human rights records. “Paul Kigali is a friend of Bill Clinton’s,” the film tells audiences of Rwanda’s leader and suggests the Clintons are engaging in neo-colonialism in exploiting African countries’ natural resources.

The film also accuses Hillary Clinton of flip-flopping on the Keystone XL pipeline after an investor booked Bill Clinton for lucrative speeches. Schweizer also says Clinton’s State Department spared Sweden’s Ericsson of troubles over selling technology to Iran after it, too, booked Bill Clinton for a paid talk. The list goes on: that Bill Clinton pocketed KGB money, a mining company put Hillary brother, Tony Rodham, on its board after it won concessions.

The individual facts are largely true and based on widely reported events and public documents. The conclusions, however, are not as cut-and-dried as the film makes them out to be when assembled together. In general, the film’s reasoning is that if one thing followed another, it was a case of cause-and-effect.

Clinton campaign officials did not respond to a request for comment about the film, but they were harshly critical of its source material. “A new book by Republican operative and friend of the Koch brothers, Peter Schweizer, makes a number of wild accusations about Hillary Clinton—so wild that even the author admits he has no evidence to support them,” the campaign said last year.

There are a lot of leaps of logic in the film, but the insinuations, told through a pattern of favorable results following cash to Clintons, make for a disheartening watch. For instance, Clinton pal Joe Wilson, a former U.S. Ambassador at the center of the Bush-era controversy over weapons of mass destruction, allegedly got a leg up for his investment firm with help from the Clintons in South Sudan. Then there is a $100 million pledge to the Clintons that coincided with favorable contracts in Nigeria and a $1.4 million speaking fee for Bill Clinton personally. Investor Marc Rich, who received a controversial last-minute pardon in 2001, even makes an appearance.

This is not a movie that is going to dissuade the #imwithher crowd from supporting Clinton. But it is a movie that might keep disaffected liberals at home, energize the Sanders supporters to keep up the fight even after their preferred candidate bows to reality and serve up new fodder for conservative talking heads on cable news. This isn’t a game-changing movie, but one that could keep some less enthusiastic voters on the sidelines.

The film carefully curates reality in way to boost anti-Clinton voices. For instance, discussion of Bill Clinton’s role in post-2010 Haiti earthquake completely ignores that George W. Bush also helped raise cash in the wake of the disaster, nor does it acknowledge that one character, the founder of Canadian TD Bank’s sister corporation, TD Ameritrade, also funded Republican Gov. Scott Walker’s super PAC. The film doesn’t mention other reasons why Hillary Clinton may have made particular decisions, leaving the viewer with a narrow understanding. And it blurs the line between Bill and Hillary Clinton’s actions, treating them as essentially the same person.

None of this is new. Filmmakers from both parties have often used such films to push a point of view. Michael Moore’s documentaries about George W. Bush won wide release—and debate—while conservative films against John Kerry and Barack Obama were more muted in their impact. Running for President all but guarantees someone will make a movie about you.

And none of this is new to Clinton. Allegations of shadiness have dogged the Clintons for decades, and they’ve always survived. But this movie is a pile-on for the ages, moving at a fast clip.

Visually and sonorously, the film more closely resembles a Bond film, with pictures of the Clintons and their associates stained with blood-like red ink. At other times, the film suggests that checkbooks are filled with blood money. And the music that plays over grainy images of the Clintons—and mushroom clouds—matches. It won’t win an Oscar for subtlety, but it makes a point.

There are plenty of digs at the Clintons, who Hillary Clinton famously said were “dead broke” and laden with legal bills when they left the White House in 2001. The film says, in not-subtle terms, that the Clintons padded their personal finances with cash from foreigners. And, for good measure, there are jabs at the Clintons’ perceived arrogance, including shots that Hillary Clinton delayed relief supplies after the Haitian earthquake because the plane occupied the tarmac before she “was whisked away.”

The film’s team plans to, in Bannon’s words, “carpet-bomb this all over.” That means a screening on Monday to distributors on the sidelines of the Cannes Film Festival in France. But they’re also looking at distribution outlets through Netflix, YouTube, Amazon and others, just to get it out there. “We want this to go out to as many people as possible,” Bannon said. And unlike the 2008 anti-Clinton movie, streaming video is now quite common, meaning the film has a much wider potential audience.

Schweizer acknowledges his books, while heavily researched and footnoted to high heaven, was dense. It reads like a “legal brief,” Bannon half-jokes. But a film adaptation has allowed Schweizer take some editorial liberties. (Although, it should be noted, one person in the private screening Wednesday asked Bannon why the word “evil” wasn’t used to describe Clinton. The film’s backers think it goes too easy, if anything.)

None of this surprises Clinton. “The Right Wing never gives up attacking me,” she remarked on Tuesday at a campaign rally in Louisville, Ky. She joked that her foes are “are really throwing the kitchen sink” at her this campaign. But, she remarked, it hasn’t crushed her. “I have a message for them: They’ve done it for 25 years and I’m still standing.” And she’ll probably keep standing even after this movie, but that won’t reduce the sting. 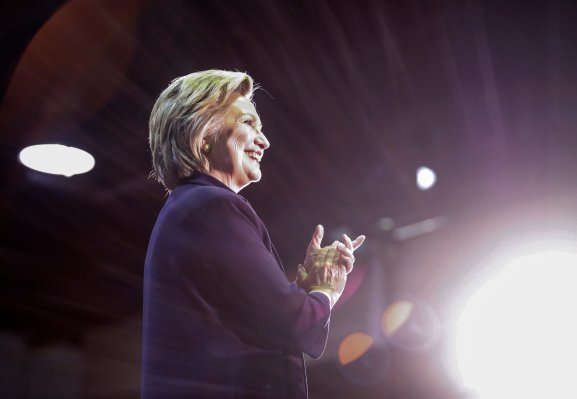 Clinton's Plan to Take On Trump
Next Up: Editor's Pick