These Look Like Campaign Ads. But They're Something Entirely Different

They had all the ingredients of typical political advertisements: red, white and blue color schemes, a presidential-looking candidate, a memorable hashtag (#FeelTheBerk). But the references to border walls and gay rights that appeared on the ads featuring Roger Berkowitz were followed by less presidential fare like opinions on fish tacos and rainbow trout.

“If we build a wall on the border, who will eat our delicious fish tacos?” Berkowitz asked in one.

“I support the gay community. That’s why we serve rainbow trout,” he said in another.

“My first act in office will be to legalize sea weed,” he vowed in a third.

Berkowitz is not a candidate for political office, and the ads were not promoting a real political campaign. He is the President and CEO of Legal Sea Foods, and the ads that ran earlier this year were meant to leverage interest in a historically unpredictable presidential contest to drum up sales for the Boston-based restaurant chain.

“Are our ads a little provocative, are they a little edgy?” Berkowitz said in an interview. “Yes, they are, but the way I look at it, fish is brain food, and smart people—the people I want to attract—understand what it is I’m trying to do, and they understand the humor behind it, and they understand it’s not mean-spirited. But it’s also meant to elicit a response, and I can’t pretend to believe that one size fits all.”

Legal Sea Foods is just one of many commercial brands that have elected to dance around controversy this year and engage in an irresistible political conversation. The notoriously divisive election—which is only getting more bitter as Hillary Clinton and Donald Trump gear up for battle this fall—has captivated the country and opened a window for companies seeking a moment in the zeitgeist.

Hotels.com turned its Captain Obvious character into a candidate who is literally running for president and staying in “a lot of different hotels” along the way. “Did you hear there’s a race for president?” he asks innocently. “Well, I’m running—and I’ll run against anybody: donkeys, elephants, orangutans, you name it.”

Chrysler released ads featuring Martin Sheen in his West Wing role of President Jed Bartlet and Bill Pullman in character as Independence Day President Thomas Whitmore. Together, they joke about having to “swerve right back to the middle” ahead of the general election, using the car’s handy blind-spot monitoring and collision warning systems to “keep you from crashing your campaign.”

And actors Seth Rogen and Amy Schumer formed the Bud Light Party in a Super Bowl ad. “They say we’re a nation divided, they say we disagree on everything,” Schumer says in the spot. “That’s not true. We agree on a lot,” Rogen counters, arguing that Bud Light “brings America together.” Later, Budweiser took things even further, announcing it would temporarily change its name to America—a rebranding effort for which Trump claimed credit.

“These are just spoofs trying to make the contrast that people can agree on some things—the really important things, like beer—but they can’t agree on candidates and issues,” said Shanto Iyengar, a Stanford University political science professor who has studied the relationship between political and commercial advertising. He said product advertising in general can benefit from the revulsion people feel toward campaign advertising because it looks more attractive and engaging by comparison—especially given the often negative tone of political ads.

“These are all themes that are playing out in a very visceral way on our political stage, but [brands] are looking to capture their share of that conversation to be relevant and cool and garner their part of the attention to this cultural phenomenon,” said Cary Hatch, CEO of the ad agency MDB Communications. While consumer product ads mimicking political ads is not a new practice, Hatch said the fierce level of competition this election season has inspired more brands than usual to give their ads a political twist.

“It doesn’t come without peril, but done well, the upside makes them relevant and clever and part of the conversation,” Hatch said. “Empathy with consumers over the penetration—or some would say pummeling—of political messages always makes people feel good about that brand because if you’re mocking it, it says you get me, ‘I feel your pain.’ If you can do it smartly with a smile and say, ‘we’re suffering along with you,’ or ‘we get you,’ that’s never a negative.”

Berkowitz said he knew some people would be offended by the ad campaign, but his goal was to offer a clever reference to the presidential election while remaining politically ambiguous. He considers it a success, pointing to both positive and negative feedback from people across the political spectrum. The “rainbow trout” ad sparked criticism from a group that interpreted it as homophobic, and also earned praise from an LGBT publication that wanted to print it, Berkowitz said. In all, Legal Sea Foods received about 300 calls and messages from consumers about the campaign—almost 75% of which were positive in nature, according to New York-based DeVito/Verdi ad agency, which made the commercials. The agency said the ads yielded the best consumer feedback of any Legal Sea Foods campaign.

When the ads ran in Massachusetts ahead of the state’s March 1 primary, people stopped Berkowitz on the street to ask if he was really making a run for the presidency, he said. The company declined to reveal specific sales figures or how much was spent on the campaign, other than to say there was an increase in sales and foot traffic at Boston-area locations in the weeks after the ads aired.

Some think election-themed ads are too risky in such a polarized political environment, as brands could easily alienate Democrats or Republicans if they depict their product as somehow aligned with a certain party. “This is really pretty incendiary stuff,” Iyengar said. “If I am a brand or I am a product, I’m really not going to go near the election. Period.”

Macy’s, NBCUniversal and Serta are among the companies that have wrestled with that controversy, receiving blowback for their business relationships with Trump and for their subsequent decisions to end those partnerships. When Macy’s decided last year to pull Trump’s clothing collection from its stores, it assuaged consumers who had been offended by Trump’s comments on immigrants but angered consumers who objected to the store’s apparent anti-Trump move. CEO Terry Lundgren said Macy’s would never carry products by a presidential candidate and explained that it had never before had to deal with that problem. “This is a brand-new experience for us, and I hope it will not be something we will have to deal with in the future,” he said.

Though this election has posed new challenges, the crossover between commercial and political branding isn’t new, said Georgetown professor Adonis Hoffman, who has a background in advertising and communications policy. He described the images of Americana that often appear in ads for trucks as the same as those that appear in presidential campaign ads—rolling hills, crowds of smiling people, a Main Street scene.

“Every credible candidate has at least one of those in their entire program, and those are kind of throwbacks to—if you think about some of the Ford commercials or Dodge commercials, where they’re really appealing to some strong American mainstream values,” Hoffman said.

As JetBlue asks passengers to reach across the airplane aisle, Pop-Tarts invites consumers to “pop the vote,” and the Burger King mascot appears in a debate opposite a “Senator,” Hoffman predicted the convergence of commercial and political advertising will continue through November. “I think what’s going to happen is we’re going to see what amounts to a Coke vs. Pepsi style of advertising,” he said, anticipating Trump and Clinton’s general election messaging. “How do those two products differentiate themselves?”

DeVito/Verdi—which has experience in politics, having made the ads for Clinton’s first Senate run—is now working on new Berkowitz-for-President ads that will roll out around the party conventions and general election. Ellis Verdi, the agency president, said he doesn’t think the campaign would have worked in a different election cycle. “This is that much of a cultural phenomenon,” he said. “As an advertising agency, I just can’t resist it.”

Verdi said his goal is to grab consumer attention with an empathetic message: “How silly is this campaign in some ways?” 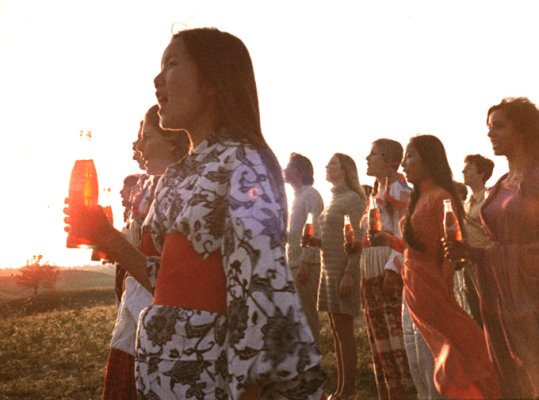 Man Who Inspired Mad Men and 'Taught the World to Sing' Dies
Next Up: Editor's Pick