American fashion brand Calvin Klein has unveiled more images in its Spring 2016 campaign on Instagram, and some people are not happy about it.

The campaign’s tagline is “I _____ in #myCalvins,” with different images filling in that blank. Danish actress Klara Kristin poses in an up-the-skirt shot, with the tagline “I flash in #myCalvins.” For the image “I eat in #myCalvins,” Kendall Jenner squeezes a grapefruit, which may or may not be suggestive (ask Georgia O’Keefe).

Another image shows a woman with her hands in her underwear, with the tagline “I pulse in #myCalvins.”

Some people have taken to social media to criticize the latest images, saying that they objectify and hyper-sexualize women.

Ads released earlier this year showed Klara Kristin posed on a couch, with the tagline “I seduce in #myCalvins.” The image was juxtaposed on a New York City billboard next to Fetty Wap’s campaign ad, which said, “I make money in #myCalvins.” Critics at the time called out the double standards at play in the ads: Men are moneymakers while women are sexualized.

Calvin Klein has a long history of sexy ads featuring both men and women in compromising positions. Brooke Shields made history and headlines as a teen in 1980 with her infamous “You wanna know what gets between me and my Calvins? Nothing.” The advertisement was banned in some markets.

In 1992 Kate Moss and Mark Wahlberg caused a stir with their topless Calvin Klein underwear advertisement. Moss, who 17, said later in an interview with Vanity Fair that the shoot gave her “a nervous breakdown” and that she hated posing nude.

In 2008 a TV ad for the brand’s fragrance, Secret Obsession—featuring a totally nude Eva Mendes—was pulled from American TV. The company posted the unedited version online.

In 2010 a Calvin Klein Jeans advertisement featuring model Lara Stone was banned in Australia because some thought the image, which depicted 3 men by a chain-link fence hovering around Lara, suggested gang rape.

What do you think—are these ads sexual, or sexist? 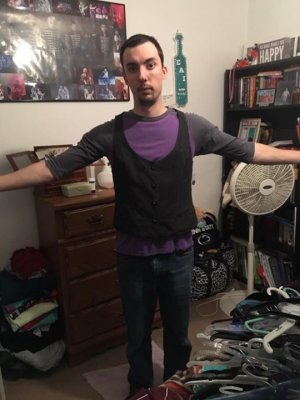 This Man Put on His Girlfriend's Clothes to Make a Point About Body-Shaming
Next Up: Editor's Pick