Why Money Monster Will Make You Mad As Hell

As citizens, voters and moviegoers, Americans are a fractured group these days–a squabbling gaggle of blind men, each shaking a fist at a different part of the elephant. Movies, particularly big Hollywood ones, aren’t nimble enough to keep up with the quicksilver shifts in the national mood. The pictures we’re seeing today may have germinated for months, if not years. That’s why it’s a small miracle that Jodie Foster’s superb thriller Money Monster is hitting theaters now. It’s a movie of the moment: an expertly made state-of-the-nation popcorn flick that also underscores just how little most of us know about the behind-the-scenes shell games of the banking and finance industries, with our money as the disappearing nugget. If you could pour the nation’s collective financial anxiety into one vessel, it would coagulate into Money Monster.

George Clooney is Lee Gates, the dazzling, doublespeaking host of a live financial-advice show that puts more stock in style than substance (sort of like Jim Cramer’s Mad Money but with women in hot pants). Lee often goes off script, a recurring headache for the producer, Patty Fenn (Julia Roberts). When she sees a delivery guy lurking near the set just as the show goes on air, she thinks Lee is pulling another stunt. But then he bounds into camera range and, at gunpoint, forces Lee into a vest laced with explosives. On camera, he rattles off a list of grievances capped with a demand that Lee fork over $800 million.

The intruder is a desperate working guy from Queens, Kyle Budwell (Jack O’Connell), who lost his inheritance after acting on a stock tip that Lee doesn’t even remember giving. Kyle doesn’t want that $800 million for himself: the loot is the cumulative amount lost by Ibis Clear Capital–a shadowy firm run by Dominic West’s Walt Camby–as the result of what alleged experts like Lee will only call a “glitch.” The word is repeated over and over in news reports, as if it were a viable explanation for what happened. Foster pastes those sound clips into a punk noise collage, kicking back at the term’s meaninglessness.

If you’ve seen the trailer for Money Monster, you probably think you know how it all plays out, though deep down you probably also know that the Hollywood marketing machine sells you the movie it thinks you want to see, just as the finance industry tells you what it thinks you want to hear. Money Monster is both subtler and bolder than the trailer makes it look. Like the provocative classics Dog Day Afternoon and Network, this is discomfiting entertainment–its edges are serrated, sharp enough to cut. The camera moves to just the right place every minute, and the editing is crisp. Moments of nearly unbearable tension are broken by bursts of energy and even humor.

Foster navigates the tonal shifts with ease, and her actors follow. Clooney is almost too adept at flashing that snow-job showbiz smile, but he changes course seamlessly, making us believe in Lee as a man who discovers he has a tiny sliver of a conscience after all. Roberts doesn’t get much screen time, but we hear her voice, a lot, through Lee’s earphone. When Kyle first takes charge, pacing and sputtering like a tiger in a zoo ready to burst out of its skin, Patty urges Lee, “Just keep breathing,” her voice cottony and soothing. She may as well be talking us down too.

But O’Connell’s face is the key to Money Monster. He gave a finely wrought performance in Angelina Jolie’s otherwise patchy Unbroken. Here he stretches even further. When Kyle tells Lee, and everyone else watching at home, “They’re stealing everything from us, and nobody’s asking how,” his anguish rolls out in waves, the sound of year after year of just getting by. In the most wrenching scene–one that may be almost unbearable to watch if you’ve ever fought bitterly with a partner over money–a person he’s let down berates him with escalating, horrifying vitriol. Despair and shame cross his face like an eclipse snuffing out the glow of the moon.

You could call misguided (but hardly crazy) Kyle a Marxist-terrorist Robin Hood, a symbol of our collective rage at people who play with our money as if it were nothing. But symbols in movies are mostly sodden things that have little to do with how we actually live. O’Connell offers something else. His face is like a folk ballad, filled with the promise of life–but also with the shadows of everything that’s been snatched away. 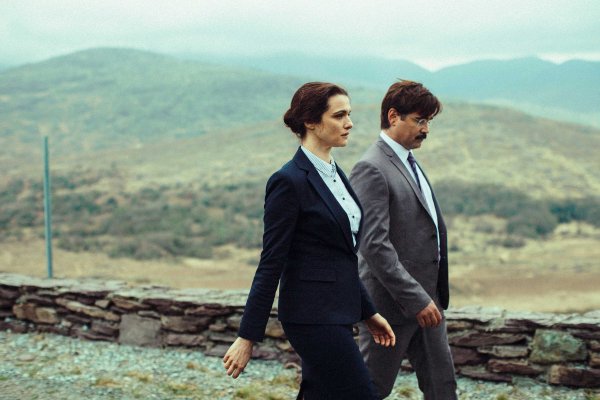 Review: When Love Is the Law of the Land, Singletons Revolt In The Lobster
Next Up: Editor's Pick