The Complicated History of One of England's Most Famous Trees

Following his defeat at the Battle of Worcester in September 1651, Charles Stuart found himself a fugitive. He evaded Cromwell’s troops by hiding in priest-holes in the houses of loyal subjects; disguising himself as a woman; and by climbing an oak tree at Boscobel House in Shropshire. This particular moment, the coming together of the emblematic English tree with the disinherited prince, became a key moment in the recollection of the Civil Wars. Rather than a symbol of defeat, the Royal Oak became one of defiance, of loyalty to the kingdom and of the stoicism of its subjects.

During the 1650s and especially on the occasion of Charles’ Restoration in 1660, the story was celebrated and narrated. Parliament decreed May 29th – the king’s birthday and the day he re-entered London – to be ‘Oak Apple Day,’ a holiday dedicated to the celebration of the Stuarts’ deliverance. John Wade’s 1660 poem ‘The Royal Oak’ celebrated the tree:

The resulting intellectual battle over ‘what happened’ at this moment in time reflects developments in historical and memorial practice over the centuries. Thomas Blount’s semi-official version perpetuated various myths; Clarendon’s History of the Rebellion gave a more sober account; the king told the story regularly and dictated a version to Samuel Pepys, which was not published until the 19th century. Others focused on the moment of romanticized loyalty, as in Memoirs of King Charles I and the Loyalists who suffered in his cause, published in 1795 in an attempt to rally support for the monarchy.

Historians began to contest the ‘facts’ about the king’s time in the tree. John Hughes codified what became known as the ‘Boscobel Tracts’ in 1830, partly as a corrective to the narration found in Walter Scott’s Woodstock (1826). Hughes called it “by far the most romantic piece of English history we possess,” but sought to present the “sources” of the story in order to get at what truth there might be in it. In 1897 James Fea similarly updated the sources with photographs and maps, in order to further “illustrate the adventurous and romantic story.”

As this shows, the story of the Royal Oak was of great interest through the early 19th century. Building on Scott’s example, Harrison Ainsworth wrote Boscobel: or the Royal Oak in 1872. Ainsworth’s oak is hollow and the king receives visitors there. Horace Smith’s Brambleyte House; or, Cavaliers and Roundheads (1836) and William Dimond’s The Royal Oak: An Historical Play (1811) testify to the renewed interest in the period. Dimond apologizes that “strict Historical fact hath occasionally been forsaken, and some incidents, altogether fanciful, have been introduced.” The story of the incident, already idealized, becomes increasingly romanticized, confused, conjectured about and added to.

The tree itself became a central part of a particular memorial culture. Pepys says that the king took a cutting from the tree and planted it in St James’s Park. This oak was uprooted by Sarah, Duchess of Marlborough, in 1705, prompting angry complaints. Descendants of the oak are also to be found at Hyde Park, Chelsea Botanic Gardens, Donington Churchyard in Shropshire (near Boscobel) and Dropmore near Maidenhead. The tree was so popular with souvenir hunters, despite a fence and then a wall, that it died (Pepys noticed it had no bark by 1702). It is still possible to visit the ‘new’ tree now at Boscobel (this one recently damaged by storms, with a third planted in 2001 for the future). You can buy saplings in its English Heritage Shop and hence possess your own ‘Royal Oak.’ Strangely most of the pictures of the tree on social media sites – Flickr, Twitter, Facebook – have no humans in them, adding an iconic but bleak sheen to the unique Oak standing apart from the forest.

The memory of the event became more and more suffused into English culture. Though abolished in 1859, there are still celebrations around the country relating to ‘Oak Apple Day.’ The Chelsea Pensioners celebrate the delivery of Charles by wearing sprigs of oak in their hats and various villages in the south-west of England continue to observe the holiday.

The upsurge of interest in the early 19th century coincided with the mushrooming number of pubs all seeking patriotic customers; the ‘Royal Oak’ is now generally thought to be the third most popular pub name in England. It even gave its name to the Royal Oak area in West London. The popularity of the term in the early 1800s also led to the naming of a racehorse born in 1823 in Yorkshire. After an indifferent career in England, Royal Oak was taken to France, where he became the most expensive stud in French history, siring 171 thoroughbreds. It is this ‘work’ in siring that led to his immense significance to racing in France and the renaming of what had been the Grand Prix du Prince Imperial as the Prix Royal-Oak in 1869.

Another clear combination of tree and money is the pound coin issued as the ‘English’ constituent part of the U.K. in 1987. The Royal Oak with crown was sculpted by Raphael Maklouf, most famous for rendering the head of the queen used on coins between 1985-97.

The Royal Oak has also given its name to eight warships. The first, built in 1664, was burnt by the Dutch on the Medway in 1667; another was torpedoed while at anchor in Scapa Flow in 1939, with the loss of more than 800 crew.

The event has become a complex part of English memorial culture: as a historiographic debate, heritage, a site of tourism and memory, something to be owned, a place to drink, something to spend. Memory, heritage and history work in strange, fascinating, non-linear ways, through England into France, and tracing these various trajectories reveals to us the complexity of consumption of the past. 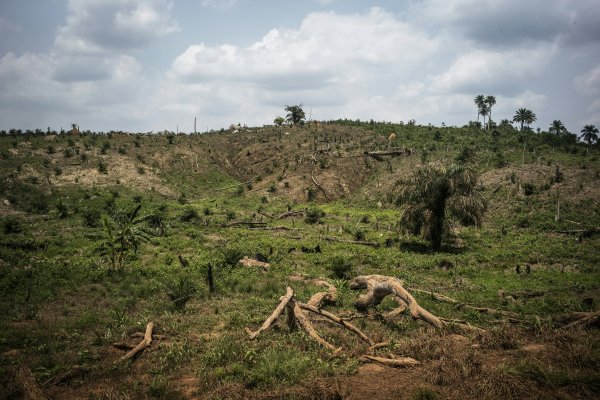 One in Five Plant Species 'Endangered,' Says Report
Next Up: Editor's Pick