ISIS Battle in Iraq Stalled by Ethnic and Religious Strife

Col. Abdulrahman Zebari, right, looks out from a small Peshmerga outpost outside Makhmour, Iraq, May 8, 2016.
Yuri Kozyrev—NOOR for TIME
By Jared Malsin/Makhmour,Iraq

As the sun sets over the front line outside the Iraqi town of Makhmour, Sergeant Farsal Goran packs tobacco into a waterpipe. Behind him is the bare concrete building where he and his Kurdish comrades sleep in shifts. In front of him lie a wall of sandbags. Roughly a mile in the distance is a town held by ISIS, the Islamic State of Iraq and Greater Syria. Earlier in the day, his unit traded mortar fire with the ISIS fighters on the other side. Now the tension has eased. “It’s like a picnic,” one of them jokes. Goran prepares the shisha over a plastic table, then sits on the ground to smoke.

Makhmour is one major front in the battle between ISIS and the forces arrayed against it in northern Iraq. The town is roughly sixty miles south of Mosul. Once Iraq’s second largest city home to 2.5 million people, Mosul fell to ISIS during the group’s dramatic sweep across the border from Syria in June 2014. Today, Makhmour is a focal point of a much anticipated, but long-delayed operation to reclaim Mosul.

The Makhmour front is also a microcosm of the political stalemate that currently leaves the battle against ISIS stalled. Adjacent to the Kurdish units of the Kurdish Regional Government, nicknamed Peshmerga, the Iraqi national army is stationed. Also located in Makhmour is a base used by the U.S. military, which has quietly increased its forces in Iraq to more than 4,000, higher than any time since the U.S. withdrawal in 2011. It was in Makhmour that a U.S. Marine staff sergeant, Louis Cardin, 27, was killed in an ISIS attack on March 19.

While the Iraqi army, Kurds, U.S. military, and other forces are nominally allied against ISIS, no agreement exists among the various sides for how to conduct an operation to retake Mosul, or how to restore order, rebuild and govern in the aftermath. The gridlock means that a major Iraqi city, with an estimated 600,000 people still living inside, is trapped for the foreseeable future under ISIS rule.

Sgt. Farsal Goran looks at his cellphone as he sits with Majid Hamid, 32, while shisha is smoked at the front outside Makhmour, Iraq, May 8, 2016.
Yuri Kozyrev—NOOR for TIME

In Makhmour, the Kurds share the front with the Iraqi army. According to the commanders on the ground, the two forces coordinate daily, for example radioing each other when there are incoming mortars from the ISIS side. But the coordination does not go beyond this basic level.

“I don’t know what’s going on exactly. They don’t tell us,” says Colonel Abdulrahman Zebari, a commander leading Kurdish troops along the Makhmour front, referring to his colleagues in the Iraqi military. According to the commanders, if they are going to venture outside of what they regard as Kurdish territory, they need an order from the semi-autonomous Kurdish government. That, in turn, will take an agreement between the Kurdish leadership and the government in Baghdad.

“For now we’re not going to fight. We’re going to help the Iraqi army. These villages are not Kurdish villages,” Col. Zebari says. His forces will hold the line, he says, but they will not advance. “In the future I don’t know if we’re going to try to liberate them or not. We’re waiting for the order.”

The Iraqi military announced that it launched an operation to re-take Mosul on March 24, but for the moment the campaign has been limited to re-taking a handful of villages. In the meantime, ISIS fighters continue to launch attacks on Kurdish and Iraqi military forces, while the U.S.-led coalition continues its campaign of airstrikes on what it says are ISIS targets across Iraq and Syria. Iraqi and U.S. officials appear to be managing expectations. In an interview with CBS news in April, President Obama said, “My expectation is that by the end of the year, we will have created the conditions whereby Mosul will eventually fall.”

A quiet scene at a small Peshmerga outpost outside Makhmour, Iraq, May 8, 2016.
Yuri Kozyrev—NOOR for TIME

When ISIS seized Mosul in June 2014, the Iraqi army collapsed. Farsal Goran, the 29-year-old sergeant who is now deployed with the Kurds along the Makhmour front, had been a member of the Iraqi army when the fall came. He was deployed at Badoush Prison, near Mosul. As the jihadis approached, he and the rest of his unit abandoned the area. “Even the commanders ran away. There was no reason to stay,” he says. He fled to Kurdish lines at Mosul dam, he says, where Kurdish soldiers told him and other soldiers to remove their Iraqi army uniforms before proceeding to safety.

Goran’s Iraqi army unit included both Kurds as will as both Sunni and Shiite Muslim Arabs. He says his unit splintered along communal lines. Some of the Shiites joined the powerful Shiite militias. He and other Kurds joined the Kurdish forces. Some of the Sunnis, he says, stayed in Mosul and joined ISIS. He claims that some of them are still in contact with him, taunting him over Facebook. “They told me, Kurds are nothing without the Western forces. We’re coming to Kurdistan one day,” he says. His former comrades betrayal appear to have hardened him, and he now expresses ethnic bigotry. “The Arab doesn’t know how to think about the future,” he says. He inhales the shisha, exhales, and passes it on. 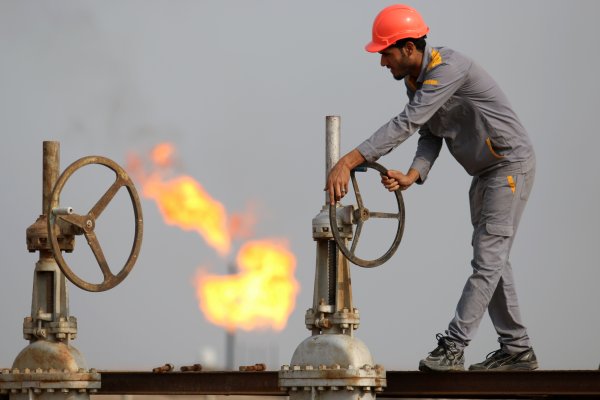 ISIS Isn't the Only Thing Destabilizing Iraq
Next Up: Editor's Pick