Could a President Trump Do What He Wants Overseas?

When the presumptive Republican presidential nominee embraces the fiction that General John Pershing killed Muslims in the Philippines with bullets dipped in pigs blood, calls for ending the international alliances that have kept the peace since World War II and talks about encouraging nuclear proliferation, you know that this is not a typical campaign.

Donald Trump has proposed massive changes to American foreign policy over the course of the Republican primary, arguing that he could get things done the same way he has with his real estate deals: with a mixture of bluster and bargaining.

But could a President Trump actually follow through on these dramatic proposals? In a few cases, yes—a prospect that his critics find worrisome. But on many of the other ideas, a combination of constitutional restraints, international politics and simple practicality means that he’d have a tougher road than he admits.

While the Constitution gives the President more latitude on foreign affairs than it does on domestic policy, the founders made sure that there were plenty of checks and balances on the chief executive’s international powers. Treaties, Cabinet members and U.S. Ambassadors all must be approved by the Senate. Congress also must approve all federal spending, which means it could thwart Trump’s proposals by refusing to pay for them.

Most critically, the wheeler-dealers sitting across the table from a President Trump will represent sovereign states, not New York real estate interests. They’ll have international law, existing trade deals and other leverage to use against him.

About immigrants and that wall

Trump’s biggest international initiatives have involved immigration. He has pledged to deport the roughly 11 million illegal immigrants in the country and to build what he calls a “Great Wall of Trump” along the Rio Grande. He’d pay for that by intercepting funds undocumented Mexicans wire to their families back home (before they’re deported). Getting rid of undocumented workers in two years, as Trump has proposed, only calls for enforcing existing laws. But that resulting lack of workers would cost the private sector hundreds of billions of dollars and require a humungous hike to pay for the stepped-up deportations.

Read More: This Map Shows Where Immigrants Send the Most Money Home

Trump has said he can seize funds Mexicans send home by tweaking the anti-terrorism USA Patriot Act, but that he’d take up to $10 billion from the Mexican government to pay for the wall instead. Experts say such moves are legally dubious and politically nuts.

“If a President Trump tried to impound remittances, he would likely incite such broad anti-government fear and loathing across the U.S. landscape that the attempt wouldn’t even last long enough to be struck down by the courts,” says geostrategist Thomas P.M. Barnett. “It would be very much, ‘If Washington can grab their income unilaterally, then what’s to stop it from doing the same to me someday?’’”

“NATO costs too much!”

Trump wants to shake up long-standing U.S. alliances like a snow globe. As one of two superpowers following World War II—and the only one for the past 25 years—both the U.S. and its allies have benefited from Washington’s lead role in NATO, whose Supreme Allied Commander has always been an American military officer. But the U.S. is an ocean away from Europe’s rising tensions with Russia, Trump says, so why should Washington foot so much of NATO’s costs? He hasn’t ruled out withdrawing from the alliance.

The 1949 treaty that created the North Atlantic Treaty Organization allows any of its now-28 members to pull out with a year’s notice. President George W. Bush unilaterally withdrew from the 1972 Anti-Ballistic Missile Treaty with Moscow shortly after becoming President in 2001, contending “extraordinary events” required Washington to build a stronger missile shield than the ABM pact allowed. Despite warnings from foreign-policy experts that the move would be traumatic, few noticed. Bush’s action “set the precedent of a President withdrawing from a treaty without Senate action,” believes Ivo Daalder, who served as the U.S. ambassador to NATO from 2009 to 2013.

Trump is on far more solid ground when he demands that U.S. NATO allies pay more for their own defense. Britain (2.1%), Estonia (2%), Greece (2.4%) and Poland (2.2%) are, along with the U.S. (3.6%), the only members meeting NATO’s goal of investing 2% of their gross domestic product in their militaries. “They’re ripping off the United States,” Trump told a Wisconsin crowd last month—and pretty much every U.S. defense secretary has agreed.

The New York billionaire has warned of bringing home the 54,000 U.S. troops in Japan (costing $5 billion annually, of which Tokyo pays about a third) and 30,000 in South Korea (where Seoul foots about 40% of the $2 billion annual bill), unless those nations pay a bigger share of the cost. If the U.S. pulls out, he has suggested, the nations could develop nuclear weapons to counter neighboring North Korea’s. (Japan is the only nation ever attacked with nuclear bombs.)

The U.S. can withdraw from its treaties with both countries after a year’s notice. And while Japan and South Korea have both declared they won’t acquire atomic arms under the Nuclear Non-Proliferation Treaty, they can withdraw from that pact with three-months’ notice. “The conservative parties in Japan and South Korea are already pushing for national nuclear arsenals,” frets Joe Cirincione, president of the pro-disarmament Ploughshares Fund think tank.

A nuclear war between Pyongyang and Tokyo would be “a terrible thing,” Trump said in April, breaking a human catastrophe down into a cost-benefit analysis. “If they do, they do,” he said of a possible nuclear war ringing the Sea of Japan. “We can’t be the policemen to the world and have $19 trillion in debt, going up to $21 trillion.” Saudi Arabia, he has suggested, might consider doing the same to counter Iran. “Nuclear proliferation, even to allies, doesn’t make sense,” says Anthony Zinni, a retired Marine general who ran U.S. military operations in the Middle East from 1997 to 2000. “It could spark a new Cold War, or worse.”

Time for a change?

But Trump has prevailed in the GOP primaries precisely because he has shunned conventional wisdom, both at home and abroad. Overseas, the past 15 years have brought the U.S. 9/11, a pair of inconclusive wars that have killed nearly 6,900 U.S. troops and cost $3 trillion, a rising China and Russia, messes in Libya, Somalia and Yemen, and the scourge of terrorism.

For example, he appears willing to ramp up the war on the Islamic State—and a wobbly Congress might let him.

“We really have no choice—we have to knock out ISIS,” he said in March. “I would listen to the generals, but I’m hearing numbers of 20,000 to 30,000.” Over the past 20 months, President Obama has dispatched 5,000 troops back to Iraq without explicit congressional authorization.

When it comes to trade, Trump would have to convince Congress to approve his recommendation for a punishing 45% tariff on Chinese goods, and 35% on Mexican products. He has long argued that other nations take advantage of the U.S. because Americans spend more money on their goods than foreigners spend on U.S.-made products. The U.S. has pursued free-trade pacts since World War II as a way of increasing commerce while reducing chances of war. U.S. tariffs average 1.4%, among the lowest in the world.

But under existing law, the U.S. can only impose tariffs on specific products—not entire nations—and only after showing the exporting nation has illegally subsidized their production.

Trump’s global rhetoric will cool the closer he gets to getting his fingers, of whatever size, on the nation’s nuclear trigger, the nation’s top spy tells TIME.

“Once a President is inaugurated and is in office, and realizes the burden and responsibilities of the position, I think that has a tempering effect on anyone,” James Clapper, the director of national intelligence, said. “There are far more complexities, policy implications, legal implications to things than would appear on the campaign trail.” 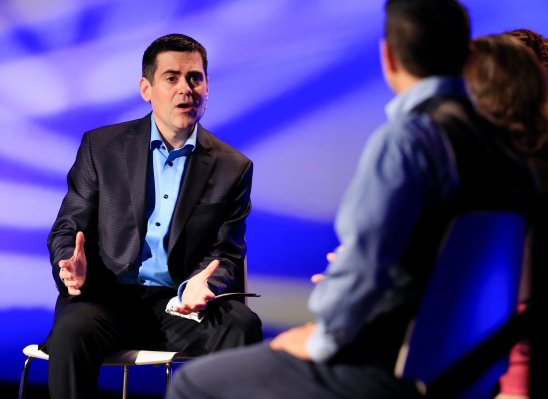