This Is How to Increase Grit, According to Research

Ever feel like you just wanna give up on something? How can you develop the inner strength necessary to achieve your long term goals?

Turns out that grit — the perseverance that keeps us going — is a lot more important than you might think. In fact, it’s the best predictor of success among West Point cadets.

From Drive: The Surprising Truth About What Motivates Us:

So we all need more grit. But how do we get there? I decided to call an expert…

In 2013 Angela Duckworth was awarded the MacArthur “Genius” Award for her work on grit.

She’s a professor at the University of Pennsylvania and author of the book, Grit: The Power of Passion and Perseverance. Here’s her TED talk:

Angela and I talked about the four things that lead to the development of grit — as well as a fifth element that’s a shortcut to the inner strength we all need to succeed.

1) Pursue What Interests You

It’s hard to stick with something over the long haul if you don’t care. So the first step to grittiness is finding something that deeply interests you. Here’s Angela:

So you need to sit back and ponder what you’re passionate about, right? Wrong. Angela says introspection is not the right path. You need to get out there and try stuff so you really know what’s perfect for you.

And once you think you’ve found something you’re really excited about, Angela recommends picking a role model or teacher to help you along.

When I spoke to her UPenn colleague, professor Adam Grant, he said a mentor is key to turning passion into skill. Here’s Adam:

Alright, so you know what you want to be gritty at. What’s the next step?

Like she said, working on weaknesses is key. And she’s not the only grit expert who believe this. When I spoke to former Navy SEAL James Waters, he said this is exactly what makes SEALs so tough.

They do a debrief after each mission to review what happened and spend 90% of it discussing what they could do better next time. Here’s James:

So how do you muster the grit to do that hard work before you’re truly gritty? Angela says, “Change the way you experience it.”

And, once again, the Navy SEALs agree. James said the secret to getting through the near-impossible SEAL training (BUD/S) was to turn it into a game. Here’s James:

(To learn the scientific way to become an expert at anything, click here.)

Okay, you’re passionate and working hard. But plenty of people can say that. What do the truly gritty people do that leaves everyone else behind?

The difference between someone who is just a hard worker and somebody who has real grit is that the latter finds meaning in what they do. And that meaning involves serving others. Here’s Angela:

Studying 16,000 people, Angela found that “grittier people are dramatically more motivated than others to seek a meaningful, other-centered life.”

Gritty people don’t merely have a “job.” They have a calling in life. She explains it with this story…

And helping others through your work doesn’t just make you gritty — it also makes you love what you do. People who perform work that benefits society show high levels of job satisfaction. And that leads to an upward spiral of grit.

From How to Find Fulfilling Work:

I know what some of you are thinking: I want to be gritty at my job but I don’t find meaning in it.

No problemo. Think about what you do that helps others. This alone boosts grit. Beyond that, other research shows that tweaking how you see your job can make a huge difference.

(To learn how to develop the mental toughness of an Olympic athlete, click here.)

Passion, deliberate practice and purpose. Great. But what’s the final step that will turn you into a juggernaut of grit?

Sound corny? No, this isn’t just wishing things will go well. Angela says you need an active type of hope. You must believe things will improve because you’re going to improve them.

Now hope may sound fuzzy and unscientific but it’s not. Research shows people without hope avoid bigger challenges, quit earlier, and act helpless. What could be more anti-grit than that?

So what should you do if you’re not too hopeful? 2 things: have a “growth mindset” and use “optimistic self-talk.”

Angela says these two lead to perseverance over adversity. A growth mindset is the attitude that your abilities aren’t fixed. Don’t focus on innate talent. Believe you can get smarter and better at anything if you work hard.

And optimistic self-talk is as simple as telling yourself “I can do it” when things get difficult. In fact, the US military has taught this to recruits in order to increase their grit.

(To learn how to develop a growth mindset, click here.)

So those are the big 4 ways you can develop grit… and, yes, they can be really hard.

But is there another way that’s easier? Or something you can use to complement the above strategies when you’re at your limit? Yes…

Hang out with gritty people or join a gritty company and it will rub off on you. Here’s Angela:

We like to think we’re all unique snowflakes but we’re inevitably influenced by those around us. News flash: that doesn’t have to be a bad thing. Peer pressure can be awesome if you use it the right way.

When I spoke to Stanford GSB professor Bob Sutton, he told me his #1 piece of advice to students was this:

(To learn how your friends can be the easy way to an awesome life, click here.)

We’ve learned a lot from Angela. Let’s round it all up and find out the most surprising benefit of grit…

Here’s what Angela says will build that inner strength and make you gritty:

So you do all of these things and become a Tyrannosaurus of grit. Awesome. Know what else you will be?

Angela surveyed 2000 people and the results were clear: “I found that the grittier a person is, the more likely they’ll enjoy a healthy emotional life.”

Everyone today is concerned with work-life balance. It’s nice to know that the same quality that can make you a success in your career can help promote happiness at home.

I’ll have more from my interview with Angela including the three things that will make your kids gritty (and the technique she uses with her own children.) To make sure you don’t miss it, join here. 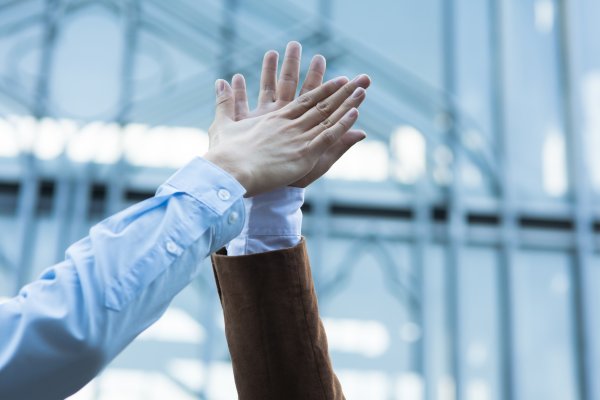 This Is the Best Way to Improve Every Part of Your Life
Next Up: Editor's Pick