Why There Are So Many More Names for Baby Girls

That’s because all of those names, though not particularly gender-specific, were given to at least three baby girls for every baby boy. And the reason isn’t a mystery. When it comes to naming children, most people are more comfortable giving girls an unusual name. Researchers informally call this the “playground effect,” in which new parents imagine how the name they choose will play out for their child in the crucible of school recess.

As a result, there are significantly more girls’ names than boys’ names in active use. The most recent data from the Social Security Administration, released last week, reported 18,993 unique names for girls and 13,959 for boys. (The administration releases all names that appear at least five times in a given year.) This “originality gap” has been true for the past century, even as the total number of names for both genders has ebbed and flowed with changes in the size and demographics of the newborn population. The dip since 2007 is indicative of the overall decline in total births, likely a product of the recession.

“The culture is much more accepting of out-there girls’ names,” says Matthew Hahn, a professor of biology and informatics at the University of Indiana who co-authored a 2003 study comparing baby name trends to evolutionary models. “The same goes for inventing new names.” For example, some formerly male-dominated names become predominantly female names, like Lindsey and Mckenzie, but it rarely goes the other way.

“The inventiveness in girl names has always led the boys,” says Alex Bentley, a professor in comparative cultural studies at the University of Houston and a co-author of the 2003 study, though he notes that, in the past decade, the rate at which people invent new boy names has caught up with the rate for girls.

One simple way to measure how dominant popular names are among a population is to look at what percentage of the boys or girls have one of the top-ten names for their gender each year. Historically, that figure has been much lower for girls than boys since the culture reached “peak conformity” around 1945. Just in the last several years, those figures have nearly converged around 8%, part of a massive overall downward trend in the dominance of a few popular names.

The penchant for naming boys after their fathers or grandfathers could also partially explain the smaller inventory. “Any sort of ancestral naming” may lend itself to greater conservatism for boys’ names, Hahn says.

Read More: Find Out If Your Name Was Ahead of Its Time

Still, the diversity of names available today would have shocked our ancestors. In older eras, “people didn’t just invent names,” Bentley says. As for where all these new names are coming from, there are a few theories. “There’s lots of misspellings and weird spellings, but a lot of those new names are whole-cloth new names,” Hahn says. Surnames also trickle into the population of first names over time.

And of course, one can’t discount the fact that digitally savvy expectant parents–or really anyone who can Google–can instantly get information on the popularity of a name. “The nature of the way we learned about names in the earlier part of the century was probably local,” Bentley says. Now parents are “trying to out-guess each other.” 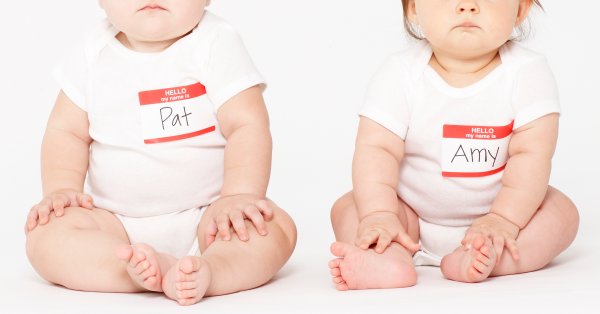 Find Out If Your Name Was Ahead of Its Time
Next Up: Editor's Pick