Everything That Happened on The Good Wife Finale

Spoilers ahead for the last-ever episode of The Good Wife

Jon Snow wasn’t the only dead character to return to TV this week. Will Gardner (Josh Charles), who died in the fifth season of The Good Wife, returned, at least in Alicia’s imagination, in the show’s final episode.

Diane’s Husband May Have Had an Affair

Just two episodes ago, Alicia (Julianna Margulies) was asking Diane (Christine Baranski) and her husband Kurt (Gary Cole) on how to achieve happiness. Kurt had given up his business to move in permanently with Diane and spend more time with her. Things were on the up and up. But during Lucca Quinn’s cross-examination of Kurt’s former associate Holly Westfall during Peter’s trial, we found out that he was at least accused of having an affair with his favorite student. Diane leaves the room during the cross, and we never hear how he replies to her question. His lack of immediate protestation suggests that he did indeed cheat on Diane.

We Never Find Out if Peter Did It

We never really knew throughout the show exactly how corrupt Peter was. So perhaps it was appropriate that we ended the series with Peter emphatically denying that he buried evidence and those advising Alicia saying that he probably did.

The most stunning moment of the episode was, of course, the slap, which will likely go down in television history as one of the most daring endings to a show ever. After Peter’s press conference, Alicia thinks she spots Jason. She chases the man down the hall only to discover it’s not him. She turns around to see her partner at her law firm, Diane Lockhart, walking toward her. For a moment it seems this might be symbolic: Alicia was never supposed to end up with a man but concentrate on building her all-female law film. Instead, Diane slaps Alicia hard across the face for goading Lucca into asking Kurt about the affair and humiliating the couple in court.

Will is a ghost. Alicia drops Peter’s hand at the press conference and doesn’t respond to his calls. Jason doesn’t show up. Despite all the romantic ups and downs of the show, Alicia ends the series very much single. 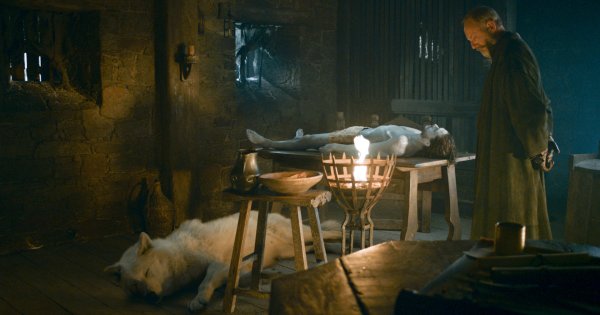 Review: Jon Snow Is Back on Game of Thrones. Now What?
Next Up: Editor's Pick