It became the highest-grossing film of 1986, and as ticket sales soared, so did interest in the military, among both potential enlistees and Hollywood producers. It was that dynamic that TIME detailed in the Nov. 24, 1986, feature “The Pentagon Goes Hollywood.”

First and foremost, the movie raised the profile of “TOPGUN,” the real nickname of the Navy Fighter Weapons School that admitted its first class in 1969 — at the height of the Vietnam War — after a 1968 study found that U.S. pilots lacked sufficient aerial-combat training. The study, named the “Ault Report” after author Capt. Frank “Whip” Ault, was “a sweeping review of fighter system performance covering logistics, training and operations and is credited with raising the air combat kill ratio” from two Vietnamese planes downed for every American plane lost “to more than 12.1,” according to the Navy.

In preparing for his role, Tom Cruise shadowed these elite pilots at the school’s headquarters, which were in Miramar in San Diego at the time, and told TIME that an instructor told him that there were “‘only four jobs in the world worth having: an actor, a rock star, a jet fighter pilot and President.'” Kelly McGillis shadowed the woman who inspired the role, Christine Fox, a 30-year-old civilian employee of the Center for Naval Analyses, who, in 2013, went on to become the highest-ranking woman ever to serve in the Department of Defense when President Barack Obama appointed her to replace current DoD Secretary Ash Carter as acting deputy defense secretary.

As the magazine reported, producers paid the military a total of $1.8 million for the use of the real Naval Air station, real aircraft carriers, real planes and the flying services of real pilots—for which the film was billed $7,600 an hour. But the use of real equipment did more than make the film look realistic. Such “high-flying hardware” designed to face off against Soviet planes (“MiGs”) made the film seem like “a commercial for the Navy.”

Whether or not it was intentional, the message worked: Apparently thousands of Americans did “feel the need — the need for speed,” because military recruiters parked themselves outside theaters and reported a surge in calls about naval aviation officer programs. The number of uniformed personnel in all branches of the military increased by 20,000 over the previous year – about 16,000 of those were just in the Navy, according to an article in the U.S. Naval Institute’s magazine Proceedings.

“By this point, the service was volunteer, so the Navy had to find ways to explain itself, and this film made people again want to go and join the military,” says Lawrence H. Suid, historian and author of Guts and Glory: The Making of the American Military Image in Film. “Top Gun completed the rehabilitation of the American military after it had been savaged in Vietnam. Films helped get us into Vietnam because there were all of these movies over the years about us winning, so the shock of losing was powerful. [After Top Gun], we felt like we could win again.”

MORE: The Officer Who Opened the U.S. Navy for Asian-American Women

Not only did more Americans want to join the military after seeing Top Gun, but more Hollywood directors and producers wanted to work with the military. TIME reported that the Pentagon was reviewing more than 200 screenplays by the autumn after Top Gun‘s release, a major increase over the years before. That review process also meant that the Department of Defense could request changes to screenplays, either based on accuracy or to save face. It had happened in Top Gun, too: the Navy complained that there were too many midair collisions in the original script, so filmmakers replaced a crash that was to have been a major plot point with another device.

Critics called this arrangement censorship. “People are going off to war and getting killed, in part because of some movie that they saw that was adjusted by the military,” David Robb, author of a book about this relationship Operation Hollywood, argued in a 2004 Mother Jones interview. Investigative journalist David Sirota denounced the system as the “military-entertainment complex” in a Washington Post op-ed and online discussion, arguing that there’s no incentive for either side to end the arrangement.

The latest incarnation of this relationship may be Secretary of State John Kerry’s February meeting in Los Angeles with Hollywood studio executives to “hear their perspectives & ideas of how to counter #Daesh narrative.” And since the fight against ISIS is the main preoccupation of today’s Top Gun-style fighter pilots, it remains to be seen if and how this battle will be incorporated into the reportedly drone-focused Top Gun 2 that producers say is in the works. 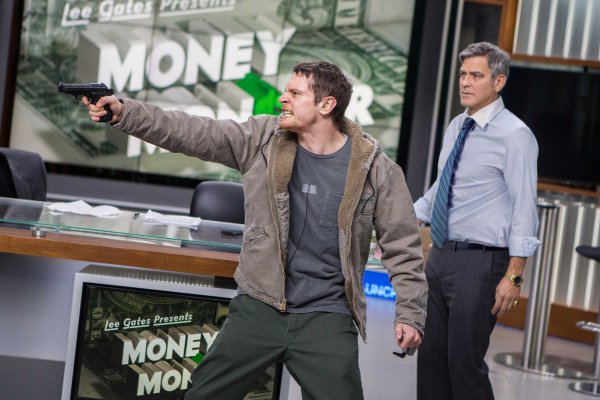 Why Money Monster Will Make You Mad As Hell
Next Up: Editor's Pick