Donald Trump has pledged to build relationships with world leaders — and he appears to have made limited progress with the former Mexican president who has been one of his fiercest critics.

Former Mexican President Vicente Fox apologized to Trump on Wednesday for lashing out at him earlier this year about the border wall. “I apologize,” Fox said in an interview with Breitbart News. “Forgiveness is one of the greatest qualities that human beings have, is the quality of a compassionate leader. You have to be humble. You have to be compassionate. You have to love thy neighbor.”

“If I offended you, I’m sorry,” Fox continued about Trump. “But what about the other way around?” He then invited Trump to come visit Mexico.

At a rally in West Virginia Thursday evening, Trump, now the presumptive Republican nominee for president, responded to Fox’s apology amid chants from his crowd about building the wall.

The feud between Trump and Fox began in February, when Fox declared, “I’m not going to pay for that f–king wall. He should pay for it. He’s got the money.” (A centerpiece of Trump’s presidential campaign has been a vow to build a wall along the United States’ southern border with Mexico, and a claim that Mexico will pay for construction. He has angered many Mexicans since the moment he launched his campaign last June, when he said many undocumented Mexican immigrants are “rapists.”)

Trump then demanded an apology from Fox, tweeting, “Vicente Fox horribly used the F word when discussing the wall. He must apologize! If I did that there would be a uproar!”

Since that incident, Fox has periodically trolled Trump on Twitter, including one memorable rampage from his wife’s birthday celebration in April, when he said that Trump does not understand love:

He has also referred to Trump as a “false prophet”:

The two seemed to broker a peace this week with Fox’s apology and Trump’s response, and Trump may have even taken a piece of advice from Fox. On Cinco de Mayo, Fox tweeted that Trump should use the holiday as a chance to apologize and reach out to Mexicans. Which Trump did, in his own way, by posting a picture of himself eating a taco bowl.

The truce is tenuous, however. Earlier in the same day that Trump apologized, Fox tweeted, “I maintain my position against the policies of @realDonaldTrump, we continue pushing to prevent this nightmare from becoming reality.” 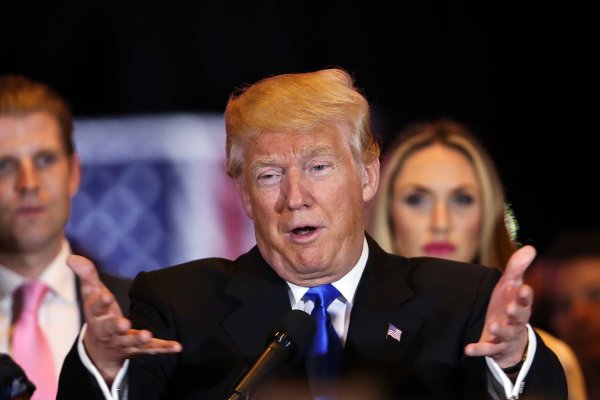 Trump Says U.K. 'Better Off' Out of European Union
Next Up: Editor's Pick