The news that Donald Trump had become the presumptive Republican Presidential nominee as his rivals suspended their campaigns after his Indiana victory prompted reactions around the world ranging from the stunned to the sanctimonious.

The prospect of a ‘President Trump’ has set off alarm bells in Mexico, perhaps understandably given the Republican’s promise to build a wall along the entire border with the U.S.. “The Mexican government is deep in analysis over how to face what we could call the Trump emergency,” said Mexico’s deputy minister for migration Humberto Roque Villanueva to El Universal. Alejandro Ramírez Magaña, president of the Mexican Business Council, that represents the country’s top companies, told the daily La Jornada that his potential candidacy “will generate uncertainty in Mexico and world-wide.”

But the response wasn’t universally negative in Mexico. After feuding with Trump for weeks, former Mexico President Vicente Fox back-pedalled on Wednesday. Speaking to Breitbart, Fox issued an apology to the reality-show star and said he wanted Trump to see the border from Mexico’s side.

Trump also made headlines in continental Europe, which has so far treated him mainly as a distraction. “So this Wednesday morning, Europe wakes up to Donald Trump across the Atlantic as the presumptive Republican nominee. A man who many considered just a few months ago as a clown” wrote French newspaper Liberation. Germany’s Die Welt said while the “craziest primaries” in modern America history is over, if Trump’s candidacy has thought us anything “it is this: One should not underestimate this man.” In an editorial, Spanish daily El Pais said that the triumph “populist, xenophobic, homophobic and sexist” candidate “attends the suicide of a party with 160 years of history.”

In the U.K., the reaction could best be described as frosty — aside from a handful of anomalies such as commentator Katie Hopkins, who shares an affinity with Trump’s view on Muslims. This, after all, is the country where half a million people signed a petition to ban Trump from the U.K. in 2015. So it came as no surprise when Tuesday’s news brought headlines like “America’s Trump nightmare has arrived” in the Guardian. Lucia Graves, also in the Guardian, lamented the rise of “a man who actively demeans women, has encouraged violence at his campaign rallies, would ban all Muslims from entering the US and recently seemed undisturbed by an endorsement from a leader of the Ku Klux Klan.” On May 4, the Financial Times wrote a stern editorial on the reality show star, which said: “The past few months have already demonstrated that he would be a disastrous choice for the most powerful political office in the world.”

China, however, seems to have taken the news well. When its foreign ministry spokesperson, Hong Lei, was asked on May 4 whether he would be nervous if Trump became the next U.S. President, he urged Americans to be “rational and objective” when it came to both countries’ bilateral relations. Academics writing in the state-controlled Global Daily, saw Trump’s isolationism as a happy alternative to Hilary Clinton. “Trump sticks to isolationism when it comes to foreign policy. He doesn’t want the US to bear so many global responsibilities. In contrast, Clinton initiated the Asia-Pacific rebalancing strategy which is aimed at containing China” wrote Jia Qingguo, dean of the School of International Studies at Peking University.

In the same piece, the Director of Institute of International Affairs at Renmin University Institute Wang Yiwei said Trump “has injected an entertainment element into the US presidential primaries” but he didn’t think his rise would “bring any major structural changes to the bilateral relationship” between both countries. 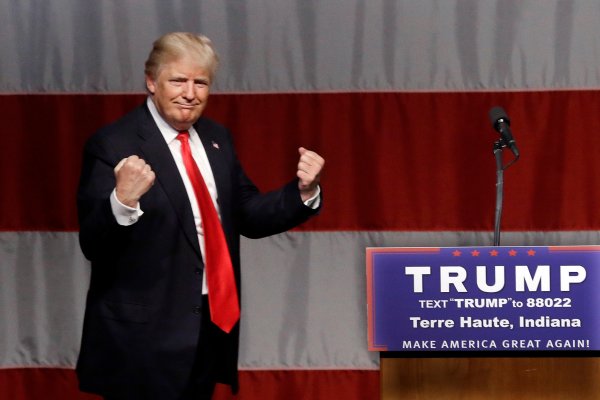