In an extraordinary rebuke of his party’s presumptive nominee, Speaker of the House Paul Ryan said Thursday he is not yet ready to back Donald Trump. Ryan said that as a conservative he has reservations about the bombastic candidate, saying it’s on Trump to bridge the gap with the party. Ryan’s comments shocked Trump, who issued a statement of his own after saying he’s not yet ready to back Ryan’s legislative agenda, while suggesting the highest-ranking elected Republican wasn’t acting in the best interests of the voters. Ryan’s comments were all the more striking given the recent calls for GOP unity from RNC chairman Reince Priebus, a longtime Ryan ally. Ryan is giving GOP lawmakers down-ballot—many who are worried about Trump’s effect on their re-election plans—the cover to distance themselves from the nominee.

In an effort to reach out to Hispanic voters, Trump posed for a photo with a taco bowl for Cinco de Mayo drawing quick Internet scorn. RNC chairman Reince Priebus addressed the controversy Friday saying of Trump, “he’s trying.”

Hillary Clinton‘s campaign is stepping up its efforts to win over Republican donors who are wary of Trump’s candidacy, as her campaign escalates its attack on the GOP nominee. On Thursday, Clinton laid into Trump’s call to deport 11 million people in the U.S. illegally, a line of attack her campaign will deploy over and again this fall. Meanwhile the investigation into her emails reaches a new phase.

“I think conservatives want to know, does he share our values and our principles on limited government, the proper role of the executive, adherence to the Constitution. There are a lot of questions that conservatives, I think, are going to want answers to, myself included.” — Speaker of the House Paul Ryan on Donald Trump 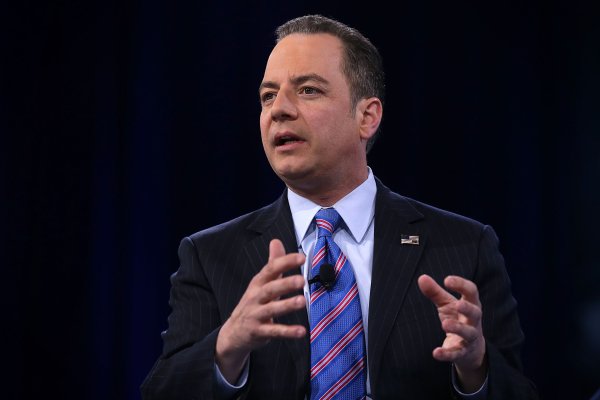 Donald Trump Must Change His Tone, GOP Chairman Says
Next Up: Editor's Pick