What's Next for Marvel Movies After Captain America: Civil War

Marvel likely has one of the biggest blockbusters in history on its hands with Captain America: Civil War. But there’s still plenty more Marvel superheroes to come: the company has at least nine more films planned between now and 2019.

Doctor Strange, Spider-Man, Black Panther and Captain Marvel will all get their own films along with more installments to the Thor, Guardians of the Galaxy and Ant-Man franchises. Then all the heroes will come together in a couple of films called The Avengers: Infinity Wars. Overwhelmed? Here are the answers to all your questions about Civil War and the greater Marvel Cinematic Universe.

What are the next Marvel Cinematic Universe Movies?

Why are Thor and Hulk missing from Civil War?

Civil War brings together almost the entire Avengers team. Thor (Chris Hemsworth) and Hulk (Mark Ruffalo) are conspicuously missing. Both characters will appear in Thor: Ragnarok, out next year. Ruffalo has described it as a “buddy movie,” and it’s safe to assume the two travel into space together to try to save Thor’s homeland from a threat.

Why is it important that Black Panther and Spider-Man showed up?

Civil War marks the first silver screen appearance for Black Panther (played by Chadwick Boseman). He’ll get his own movie in 2018, the first Marvel Studios movie with a black superhero as its central character.

This is also the first Marvel Studios movie* that Spider-Man has appeared in. He’ll get his own spinoff, Spider-Man: Homecoming, in 2017. Marvel announced that Robert Downey Jr. will star alongside Tom Holland in that film, which is great news since the Tony Stark-Peter Parker banter is a highlight of Civil War.

*Yes, there have been five Spider-Man movies—three with Tobey Maguire and two with Andrew Garfield. But those were all made by Sony, who owns the rights to the Spider-Man character. Last year, Sony and Marvel Studios decided to join forces on future Spidey films, which means he can finally join the Marvel Cinematic Universe.

What about Captain Marvel and Wasp?

We’re making some progress when it comes to representing women in the Marvel films: Black Widow and Scarlet Witch are both part of the Avengers team now. But two super-powered ladies were missing. Let’s start with Wasp. Ant-Man teased that Evangeline Lilly’s character hope would suit up as the superhero in a future Marvel movie. But fans will have to wait until Ant-Man and the Wasp in 2018.

Captain Marvel, who will be the first female superhero to get her own solo Marvel Studios movie, did not show up in Civil War. (She plays a leading role in the Civil War II plot line in the 2016 comic books.) Her movie is set to hit the big screen in 2019, but we could meet her first in The Avengers: Infinity War—Part I—more on that in a bit.

MORE Why Brie Larson Will Make the Perfect Captain Marvel

How does this movie relate to Doctor Strange?

On its face Civil War has nothing to do with the Benedict Cumberbatch film arriving in theaters in November. Not only does Cumberbatch not appear in Civil War, the movie doesn’t drop any hints about the world of Doctor Strange.

That said, everything in the Marvel universe is related. Doctor Strange could help build toward the Infinity War plot.

What is Infinity War and what does it have to do with Civil War or Doctor Strange?

Get ready to greek out. Ever since 2011’s Thor, these things called Infinity Stones keep popping up in the Marvel Universe. We’ve encountered four of the six stones so far:

The Tesseract or Space Stone: Red Skull stole it from a Church in Norway in Captain America: The First Avenger. Then Loki tried to steal it from S.H.I.E.L.D. in The Avengers. Thor took it back to Asgard at the end of that film.

The Mind Stone: Thanos gave this stone to Loki to lead the invasion of Earth in Avengers. (Loki used it to hypnotize people.) In a credit sequence after Captain America: The Winter Soldier it was revealed that the stone was used to give Scarlet Witch and Quicksilver their powers. Then Tony Stark uses it in The Avengers: Age of Ultron to create the first artificial intelligence, Ultron. It’s now safely stored in the forehead of Vision.

The Reality Stone: The villain from Thor: The Dark World, Malekith, tries to use this stone to return the universe to eternal darkness. Thor stops him, and the Asgardians entrust the stone to the Collector (Benicio del Toro), who also shows up in Guardians of the Galaxy.

The Power Stone: Star-Lord (Chris Pratt) finds the power stone in Guardians of the Galaxy. Unfortunately for the Guardians, Thanos and his henchman, Ronan the Accuser, are after the stone as well. The Guardians hand the stone over to the Nova Corps, a sort of space police.

We have yet to see the Soul Stone or the Time Stone. There has been speculation that Doctor Strange will introduce another Infinity Stone into the Marvel Universe.

Thanos (the big purple guy played by Josh Brolin) is trying to gather all these stones to make something called the Infinity Guantlet, which he can use to destroy the universe—unless the Avengers stop him.

Captain America: Civil War tears the Avengers team apart. Only a truly horrible threat (like, you know, Thanos killing everyone in the galaxy) could reunite them. Oh, and they’ll probably need to join forces with the Guardians of the Galaxy as well since Thanos is so powerful and operates in space. I told you it was all connected. 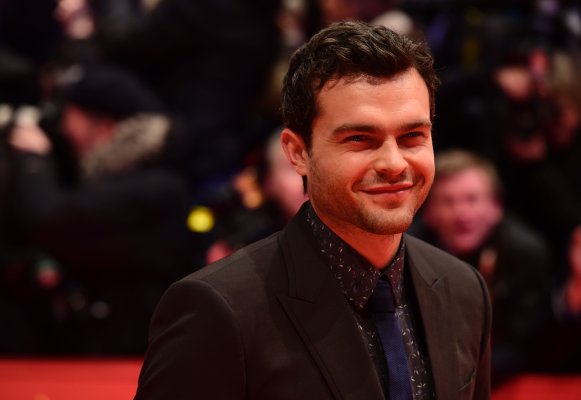