Chris Evans as Captain America–with muscles the exaggerated proportions of a parade balloon and that retro-patriotic turtle-shell of a shield strapped to his back–looks completely ridiculous. Yet his very lack of embarrassment is what makes him so shiny and wonderful, and he sets the tone for Captain America: Civil War. It’s the rare superhero movie that doesn’t grind you down with nonstop action or, worse yet, a tiresome cavalcade of smart-aleck wisecracks.

Directors Anthony and Joe Russo have reassembled much of the cast from Joss Whedon’s leaden 2015 Avengers: Age of Ultron, including Robert Downey Jr. as Tony Stark/Iron Man and Scarlett Johansson as Black Widow, but here the movie around them is smarter and more intimate. What do superheroes talk about when we’re not around? The script gives us some idea when Paul Bettany’s gallant, solar-powered Vision attempts to cook a meal for Elizabeth Olsen’s soulful but stubborn fire starter Scarlet Witch–an act of selfless romantic daring, considering he’s never even eaten before.

The plot is more of the usual: the Avengers must work together, yet their petty disagreements divide them. Well, of course they do! But even if, like nearly all comic-book movies, this one is overstuffed with action sequences, the Russos add enough witty touches to prevent total brain shutdown. There’s Sebastian Stan’s beefy, bipolar Bucky Barnes/Winter Soldier grabbing a spinning motorcycle from the air and mounting it handily, and the sight of one superhero (whose identity shall not be revealed by order of the spoiler police) towering mightily above the rest–a computer-generated effect that still, somehow, retains enough awkwardness to look endearingly handmade. The best addition, though, is Chadwick Boseman’s Black Panther, an African king turned enigmatic crime fighter. As both man and cat, he’s patrician and polished, a touch of class padding quietly onto the scene. Like him, the picture is blessedly light on its superhero-booted feet. 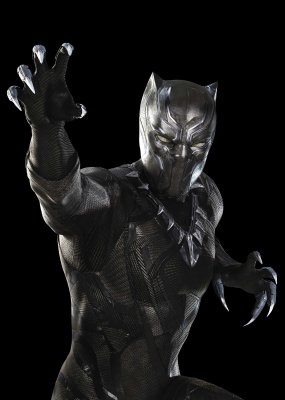 The First Black Superhero Leaps to the Silver Screen
Next Up: Editor's Pick