The First Black Superhero Leaps to the Silver Screen

Captain America: Civil War, out May 6, is crawling with superheroes, from Iron Man to Spider-Man to Ant-Man. But there was one character that directing team Anthony and Joe Russo knew they had to get right. “We felt more pressure bringing Black Panther to screen than anyone else in the movie,” says Joe Russo.

And no wonder: the first black superhero in comic-book history has been waiting to make his big-screen debut since the character was introduced in 1966. A half-century later, Black Panther is finally stepping into the spotlight. Marvel Comics (which operates separately from Marvel Studios, though Disney owns both) recruited Ta-Nehisi Coates–a leading voice on issues of race in America–to write a new Black Panther comic series. His first issue, released in April, has already sold a record-breaking 300,000 copies. (Comic best sellers usually top out at 200,000.) In 2018, Black Panther will become the first black superhero to get his own Marvel Studios film. Directed by Creed filmmaker Ryan Coogler, it will beat Marvel rival DC Comics’ Cyborg to cinemas by two years.

While comics have long found champions among the alienated and tormented, Hollywood offered deliverance mostly in the form of white men. Marvel built its film empire on Iron Man, Captain America and flaxen-haired Thor. That’s finally changing with the addition of Chadwick Boseman as Black Panther. “People ask, ‘Why is diversity in our superheroes important?'” says Coates. “I’d turn that around and ask, ‘How does it reflect the real world to show just a bunch of white dudes?'”

Black Panther first appeared in a Fantastic Four comic 50 years ago. His creators, Marvel’s Jack Kirby and Stan Lee, had no idea a militant civil rights group had taken the same name just a year before. The editors’ second choice–“Coal Tiger”–would have been an odd name for a progressive franchise.

The man behind the Black Panther mask is T’Challa, a king who rules the fictional African nation of Wakanda, the most advanced country in the Marvel universe; it’s a fantasy of a prosperous, independent Africa unfettered by colonialism. Over the decades, T’Challa has earned a Ph.D. in physics from Oxford, battled the Ku Klux Klan, killed vampires in New Orleans, taught school in Harlem and even married X-Men character Storm. “Comic books have been pretty good when it comes to diversity,” says Coates. “Growing up, there was really nowhere else to go in the pop-culture landscape to see black folks with the kind of power black superheroes had.”

Still, the most popular heroes have generally been white and male. In the past five years, Marvel Comics has made a concerted effort to diversify its lineup, adding a Hispanic-African-American Spider-Man, a female Thor and a Korean Hulk. Coates’ books are even told in part from the perspective of T’Challa’s female guards, two of whom are in a relationship.

Hollywood has been slower to catch up–don’t expect a superhero flick starring two African lesbians anytime soon. But after #OscarsSoWhite, actors and directors are more vigilant than ever about the lack of recognition for minority artists. Both Boseman, who played James Brown in Get On Up, and Coogler, who won accolades for Fruitvale Station and Creed, are oft-cited examples.

“Things are changing. We wouldn’t be having this conversation about my starring in this film if they weren’t,” says Boseman. He was first introduced to Black Panther at Howard University, a historically black university where, coincidentally, he also met fellow student Coates. He’s been fascinated with Wakanda since and worked with a dialect coach on the set of Civil War to develop an accent that mixes cadences from the geographical region where Wakanda would exist. “Even if he wasn’t a superhero, he would be interesting to me–as an African king and warrior, ruling the most technologically advanced nation in the world,” says Boseman. “How often do you get to see that movie?” 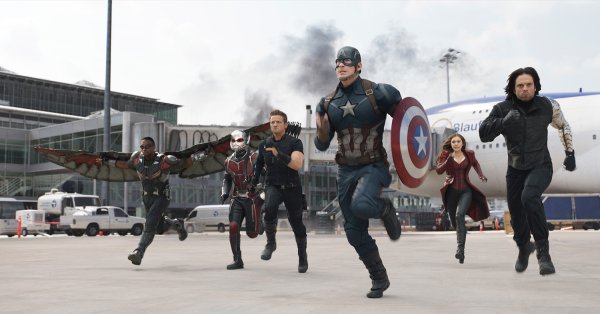 See How Captain America: Civil War Connects to All the Future Marvel Movies
Next Up: Editor's Pick