What Happens After Donald Trump Wins the Nomination?

Donald Trump began his day on May 3 with an absurd claim that linked rival “Lyin’ Ted” Cruz with the assassination of President John F. Kennedy. He ended it by clinching the GOP’s presidential nomination and forcing Cruz from the race altogether.

What Trump does next is a question that has party elders, Trump’s closest aides and even his family fretting. Does he emerge as this century’s Ronald Reagan, who remakes the party’s image for a generation, or as someone more akin to Barry Goldwater, the GOP’s 1964 nominee, who loses 44 states? It is a question that Trump seems unready to answer. How Trump comports himself in the coming six months before Election Day stands to either remake U.S. politics or splinter an already deeply divided country.

Trump earned the nomination through the brute force of his charisma. He studied his audiences and gave them the performances they wanted. “He needs to stay who he is,” said Trystan Camp, a 48-year-old resident of Granger, Ind., before Trump took the stage in South Bend on May 2. “We don’t need someone telling him to behave.”

But the tonal tug of war is just starting. After he lost Wisconsin, the former Apprentice host briefly tempered his message, working economic statistics into his speeches and referring to his opponent with respectful phrases like “Senator Cruz.” But winning the primaries in the Northeast seemed to restore his animal spirit, and sewing up the nomination is only going to goad him further.

And therein lies the dilemma for the GOP. The Republican National Committee’s chairman declared Trump the de facto nominee after his win in Indiana. But Trump doesn’t want to behave like a conventional candidate, not least because no one has more fun with the Trump phenomenon than the mogul himself. It’s his campaign, in other words, and he’ll behave the way he wants, thank you very much. “If I was presidential,” he said recently, “about 20% of you would be here, because it would be boring as hell.” It would also be predictable, and he sees being unpredictable as an asset.

That defiant pose will be tested now that Trump finds himself needing voters outside the GOP primaries. All presidential candidates recalibrate as their campaigns pivot from the primaries to the general election. The black-or-white fringes matter less, and the focus usually shifts to courting the gray in between. Mitt Romney turned from conservative warrior to moderate in a move that one top aide called an “Etch A Sketch” remake. Four years earlier, John McCain transformed from a hot shot renegade who chatted candidly with his traveling press corps to a talking-point-driven robot with a curtain that walled off the press on his campaign plane. “You know you have a moral obligation to comport yourself in a way that helps your party,” says Mark Salter, a former McCain adviser who adds that he will vote Democratic before supporting the Donald. “It’s not in Trump to change. He doesn’t have that kind of self-awareness.”

And so the Trump show continues. He has started to take on Hillary Clinton more, claiming without any apparent basis that if she were a man, she would be polling at 5%. “Hillary, she’s going to be terrible on jobs, she’s going to be terrible on the economy, very, very weak as to security for our country at the borders. She is proven to be incompetent on the military,” Trump tells TIME. Such comments are of scant comfort to those in Trump’s orbit who have been counseling him to stick to a more disciplined script focused on policy, not personality.

In response, Trump assures them that he is going to heed their advice. He is at work on speeches detailing his ideas on trade, economic development and the law. But he isn’t going to give up his rowdy rallies, which he clearly enjoys, or his fringe theories about Bill and Hillary Clinton’s past, which he bets will help him narrow the gap. He’ll show up to give the teleprompter-guided speech as long as he can have massive rallies with a Rolling Stones soundtrack cranked way up. (The Stones have asked Trump to stop using their music.)

The dual nature of Trump’s performances has been mirrored behind the scenes. He hired veteran strategist Paul Manafort, who went to work reviewing the campaign’s finances and lining up battle-tested veteran aides. Manafort told the RNC that Trump was merely acting out a role and that he would soon turn to a less abrasive approach. For a while it appeared that campaign manager Corey Lewandowski, a Trump acolyte who was urging Trump to let it rip, had been sidelined. Then just as suddenly, the door swung the other way, Lewandowski wrested back the checkbook and Trump returned to his fisticuffs campaign. And yet on the night when Trump became the de facto nominee, he thanked Manafort first.

In some ways, Trump is taking cues both from his crowds, which embrace the outrage, and the press, which spreads it. He is nothing if not a natural entertainer, and his drive has always been directed toward generating the most adulation in the moment. As demonstrators blocked Trump’s motorcade from one California event, the candidate and his security detail climbed over a highway median to scurry in a side door. “It felt like I was crossing the border … but I got here,” Trump said, trolling the protesters who find his comments about immigrants from Mexico reprehensible. Telling the Donald that he cannot do something only doubles his resolve to do it. Just ask the Republicans who said he would never run–let alone win the nomination–for President. 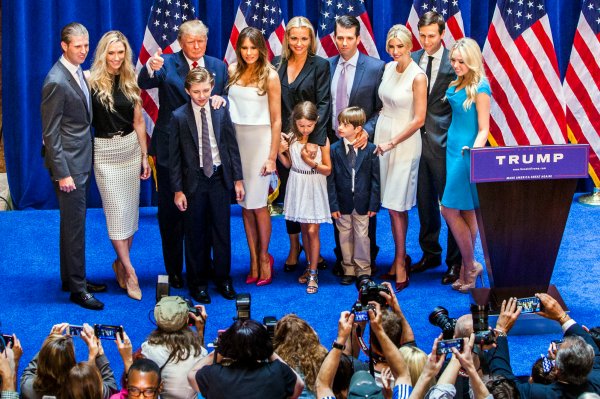 A Reader's Guide to Donald Trump's Family
Next Up: Editor's Pick