Less than two months after their Twitter tiff, Chloë Grace Moretz is opening up about her tense exchange with Kim Kardashian West – and the reality star’s “aggressive” response.

The drama kicked off in early March when Kardashian West posted a nude selfie on Twitter, which was criticized by stars including Moretz, Bette Midler and Piers Morgan.

Now, Moretz tells Glamour for its June cover story why she felt compelled to speak out.

“I had just gotten off a plane from South Korea, I was incredibly jet-lagged, and I couldn’t take one more thing,” she says. “I saw that photo, and I had to say something.

“That picture wasn’t linked to body confidence,” she continued. “It wasn’t a #BodyConfidence or #LoveWhoYouAre. It was done in a slightly voyeuristic light, which I felt was a little inappropriate for young women to see.”

The Neighbors 2 star goes on to say she’s concerned about the kind of message the image could send to young women navigating issues related to body confidence and social media.

“I would hate for young women to feel they need to post certain photos in order to gain likes, retweets, favorites, and male attention … I wasn’t slut shaming. It’s not about body shaming.”

Moretz initially tweeted in March that “I truly hope you realize how important setting goals are for young women, teaching them we have so much more to offer than our bodies.”

She later added, “There’s a huge difference in respecting the platform that you’re given as a celebrity and ‘slut shaming,’ something I never have done and would never do.”

Karadashian West responded swiftly, writing “Let’s all welcome @ChloeGMoretz to Twitter, since no one knows who she is.”

Moretz tells the magazine she found the reality star’s response funny – even if her mom didn’t agree.

“I started laughing. I was at dinner with my family [when] I got the notification [on my phone]. I look at it and I go, ‘Oh my God. She responded.’ My mom took the most offense to it because it was girl-on-girl hate and Kim didn’t come back with an educated response on body confidence.

“It was aggressive, and also it was incorrect,” she continues. “I don’t have 45 million followers or a TV show that follows my life. But people know who I am. I pride myself on having opinions, and I don’t express them in snarky ways toward people.”

The former child star has her opinions, but she also values her privacy. Although she has recently been romantically linked to Brooklyn Beckham, she keeps mum about her dating life in the new interview “because it’s no one’s business. These moments are supposed to be so personal and special – you’re building a foundation with someone or just having fun and going on a date. No one needs to know about that.”

However, the star is more than willing to open up about her Neighbors 2 character, calling the fictional Shelby “a frat bro” – not that it’s necessarily a bad thing.

“She goes off the cuff,” she explains. “I like that, because I don’t think we [usually get to] see young women put into a position where they’re making rash decisions. When we do see young women bucking the system, we see them do it in a very educated sense. Instead of being poised … [Shelby] genuinely is kind of an idiot!” 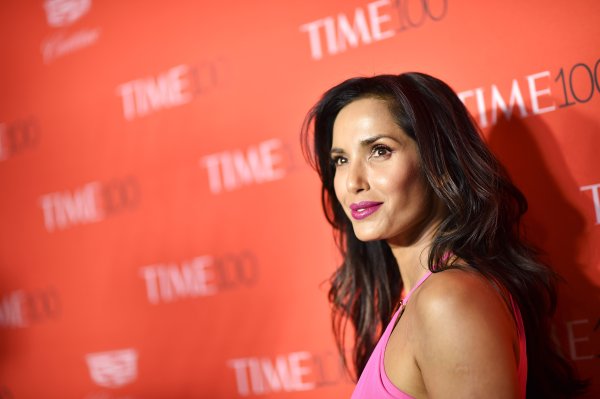 Padma Lakshmi Thanks Elle India for Showing Her Nipples
Next Up: Editor's Pick