A leader of the American Family Association, which has loudly opposed Target’s transgender-inclusive bathroom policy, said Monday that the group was sending men into women’s restrooms in order to test the policy.

“We’ve already had people testing this, going into Targets, and men going in to bathrooms, there is absolutely no barrier,” Sandy Rios, the director of government affairs for the AFA, told Breitbart News Daily. “The chief concern for the American Family Association is predators who will take advantage.”

More than 1.1 million people have signed the AFA’s call to boycott Target because of its policy allowing customers to use bathrooms and dressing rooms that correspond with their gender identity, not the gender assigned to them at birth. Rios said that the policy would encourage “men dressed like women” to use the bathrooms, and would create “trauma for little girls.”

“I think the potential for sexual predators is just enormous,” she said. LGBTQ activists point out that there has been no increase in reports of sexual predators in bathrooms in the cities that have implemented trans-inclusive bathroom policies, and call this argument a “red herring.” Some of the largest organizations devoted to ending violence against women have also come out against the notion that such policies increase the likelihood of sex crimes, calling the notion “false.”

Rios called the defense of transgender rights an example of the “mindless, ridiculous, madness of the radical left,” and encouraged listeners to sign the boycott petition against Target. 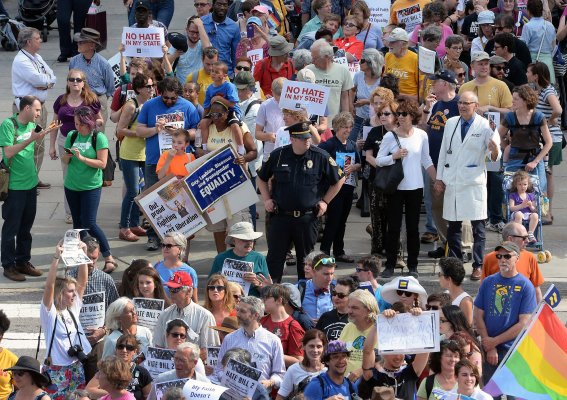