Air pollution—an environmental problem now more associated with the developing cities like New Delhi than the capitals of the West—has emerged as key issue in the race to elect the next London mayor, with all three leading candidates campaigning on their solutions and voters describing the problem as an important concern.

The mayoral campaign comes on the heels of a series of recent reports blaming pollution—largely from the emissions of diesel vehicles—as a leading killer in the United Kingdom. Around 40,000 people deaths annually in the country are linked to air pollution, according to a recent Royal College of Physicians report. Another report, from King’s College London, suggests as many as 9,500 people die of that cause annually in London alone.

Those figures—blasted across headlines and bandied about in campaign speeches—have been absorbed by the electorate. Nearly 70% of London parents say they’re worried about their children breathing dirty air and nearly two-thirds say the city should completely ban diesel trucks from the city center, according to recent polls from the London Evening Standard.

“We’ve got a real diesel problem in London and pretty awful streets,” says Simon Birkett, the founder of the NGO Clean Air in London. “In London, you can actually smell the pollution… Go down Oxford Street, you can literally smell it.”

Read More: These Are America’s 10 Most Polluted Cities

The mayoral candidates all acknowledge the scope of the problem and say they are committed to expanding a measure introduced by current Mayor Boris Johnson to create a Ultra Low Emission Zone in London beginning in 2020 that would charge owners of high-polluting vehicles who want to enter city center. The leading candidates—with the exception of Conservative Zac Goldsmith—have said they would move that date forward and expand the territory it covers.

Reducing harmful emissions from London’s iconic bus fleet has also become a key campaign issue. Labour candidate Sadiq Khan and Liberal Democrat candidate Carol Pidgeon, as well as Goldsmith, all say they will ensure that the city only adds clean energy vehicles to its bus fleet, though they vary on some of the specifics, according to a report from U.K. think tank Policy Exchange.

“Whoever is elected, there is definitely going to be some change and accelerated action on this issue,” says Richard Howard, head of environment and energy at Policy Exchange. “There is a desire to tackle the problem that maybe wasn’t there in the past.”

London represents perhaps the best—or worst—example of a growing air pollution in developed cities that thought they’d left such problems in the past. And ironically, the issue has arisen—at least in part—as a result of Europe’s aggressive efforts to address climate change. European countries and the European Union created incentives to encourage consumers to buy diesel vehicles because they emit less carbon dioxide—a key contributor to global warming—than their gasoline counterparts. The initiatives worked and in 2013 diesel vehicle penetration topped 35% in the UK, according to a government report. (In the United States the comparable figure is in the low single digits and likely to fall following the Volkswagen emissions cheating scandal).

But while diesel vehicles have a smaller carbon footprint, they emit around 20 times more nitrogen oxide than gasoline-powered cars, contributing to a slew of respiratory problems and worsening conditions like asthma. Nitrogen dioxide levels at Oxford Street—commonly thought to be the most polluted street in the country—averaged four times the legal limit in the year leading up to August 2015, according to a Policy Exchange report. In the first two weeks of 2016, the city exceeded the maximum days of high nitrogen dioxide pollution allowed for the entire year.

The fight against air pollution, which comes half a century after the country enacted its Clean Air Act to deal with the grime of “London pea soup fog,” extends beyond London city limits. The environmental group ClientEarth successfully sued the national government in the country’s Supreme Court last year arguing that the administration’s plan to address pollution would fail to meet air quality standards. In response, the Conservative government drafted a new plan that would charge high-polluting vehicles in some of the country’s largest cities (London is left to implement its own scheme), but that strategy also faces another challenge arguing that it is insufficient.

London is far from the only rich city where pollution has spiked in recent years thanks to diesel vehicles. The mayors of 20 major European cities—including Paris, Madrid and Athens—signed a letter in March arguing that the E.U.’s diesel regulations damage human health in their cities. “How can we protect the health of our fellow citizens when the European Union has rubber-stamped a permit to pollute, at the expense of public health?” they wrote in a letter published in Le Monde. Some cities, like Paris, have enacted their own restrictions on cars in the city center.

Globally, air pollution kills millions of people each year, with developing country cities like Beijing, New Delhi and Mexico City particularly hard hit. Policymakers in those places have used the crisis as an opportunity to tackle climate change and air pollution in one swoop with measures like reducing reliance on coal-fired power plants and industrial emissions. But the examples of European cities like London shows that there may be times when the imperative to reduce carbon emissions clashes with the need to clean the air.

“The only way that the world is going to get a handle on the problem is if country by country leaders take ownership of the issue,” says Mount Sinai Dr. Phil Landrigan, a leading public health researcher who is leading a commission on air pollution. 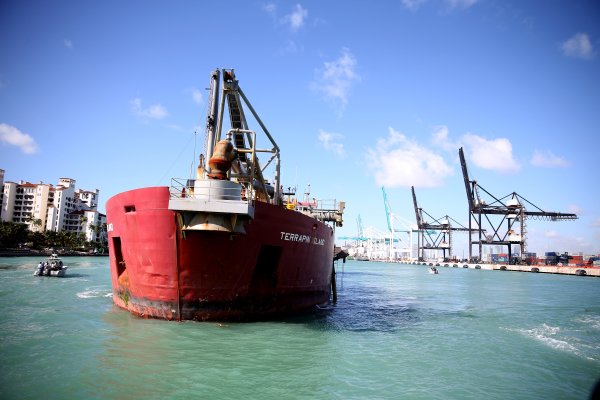 Warm Temperatures Aren’t the Only Thing Killing the World’s Reefs
Next Up: Editor's Pick