Chelsea Handler: When You Meet a Single Woman, Congratulate Her

Here I am, a humble single girl trying to make it on my own—just like Mary Tyler Moore was in her 1970s hit TV show—and yet still people reflexively ask me all the time:

“Who are you dating?”

“Will you ever get married?”

“Don’t you ever get lonely?”

Because apparently it’s just not O.K. to be by yourself.

I come from a big, loving family. I’ve had plenty of boyfriends, one or two marriage proposals and deep and intense human intimacy in my time on this Big Blue Marble. And after experiencing all that and seriously thinking about marriage, I respectfully reserve a table for one in the restaurant of life.

I have married friends, unmarried couple friends, divorced and single friends, and family—and each of them has reached their present destiny through the meandering river that is the individual human life.

I understand the urge to procreate and the beauty of having children, but on the other hand, might perhaps this “be fruitful and multiply” experiment of 7.4 billion humans on the planet possibly be due for a serious mental health and environmental check-up?

Why exactly is it that 2016 society still has a problem with single life?

About 50 years ago, a survey examined American attitudes about being single: More than half of those surveyed believed that people who preferred being unmarried were “sick,” “immoral” or “neurotic,” even though single people have always been perfectly fine…with the exception of a small handful of serial killers.

I’m guessing that stat has dropped a bit over time, but society is still obsessed with pairs.

Read more: We Need to Take Marriage Off Its Pedestal

“They”—the amorphous community of married couples and the often patriarchal and/or religious masses of the world—“just want us to be happy” by forcing us to pair off. They’re apparently uncomfortable with the solitary splendor of people like me who are single and pretty goddamned comfortable about it. “They”—the married people—want me to join their happy kingdom where about 50% of first marriages and even more second marriages end up in the divorce incinerator.

And of course, as is the tradition in what is still mostly a man’s world, single females still bear the disproportionate brunt of single-shaming and single-bewilderment-syndrome, while men tend to receive an understanding wink and a nod regarding their bachelor achievements, bedroom conquests and beer breakfasts.

Simone de Beauvoir wrote in her 1949 book The Second Sex—and it’s still true today—that gender is a device men use to stereotype women and that they use it as an excuse to organize society into a patriarchy conveniently owned and operated by an oligarchy of men.

You get the misogynistic point.

Why not once and for all shed our Victorian social straitjackets and celebrate single and unattached females of the world, rather than wonder “what the problem is”?

It’s not just O.K. to be single for both men and women—it’s wonderful to be single, and society needs to embrace singlehood in all its splendiferous, solitary glory.

Next time you see a single woman, instead of asking her where her boyfriend, husband or eunuch is, congratulate her on her accomplished sense of self and for reaching the solitary mountaintop by herself without a ring on her finger weighing her down like a male paperweight.

Without single women and their impressive sense of self, we’d be without Queen Elizabeth I, Marie-Sophie Germain, Susan B. Anthony, Florence Nightingale, Jane Austen, Harper Lee, Diane Keaton, Greta Garbo, Jane Goodall and me, myself and I.

Being single is delightfully more than it’s cracked up to be…if you can stand the horror of your own company, that is.

As Simone de Beauvoir’s lifelong lover and French philosopher friend Jean-Paul Sartre said, “If you are lonely when you’re alone, you are in bad company.”

And doesn’t that just say it all…or if you’d prefer something less indicting of your own discomfort with your own skin, let’s just agree with what Louisa May Alcott, author of the novel Little Women, had to say on the subject:

“I’d rather be a free spinster and paddle my own canoe.” 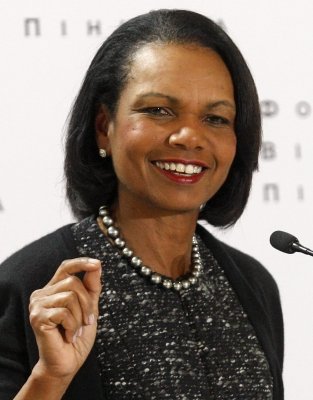 Condoleezza Rice to Grads: 'Don't Let Anyone Else Define Your Passion'
Next Up: Editor's Pick